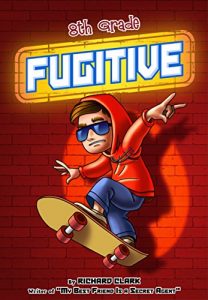 Off the roof… onto the kiddie slide… ollie into the empty pool… up the other side… do a 360, yeah!… carve around the side… handplant on the lip… hmmm, kinda high up here… Yikes! – It’s Tammy, my 11-year-old twirp sister, dying to turn me in… again.

Yep, that’s me, Brian. Brian Ryan. I’m 14… well, next July I am. And I know what you’re thinking, but I’m not just some skateboard freak. Sure, I wipe out a lot, but I’m into the physics of the stunts and all, and other sports too – BMX biking, snowboarding, blading – everything.

I even design my own stunts… which don’t always work out… but that’s why God invented band-aids, right?

I get the same old lecture from Mom at breakfast – “Stay out of the pool, you’re streaking the plaster!” Next time, she’ll take away my board – you know the drill. Also, the whole routine about making her look bad that she can’t control her own son and all. Her look bad? Hey, I’m the one with a face full of road-rash!

Finally off to school on my board. Eighth grade, MacGuffin Middle School. And look, there’s my best bud, Dale Tate. He’s got his digicam running, shooting me doing a wicked grind on a bench.

And – Oh, yes! – down the hall, there’s Robyn Griffin. She’s hot, but for some reason, she’s always avoiding me. I skate right up to her, do a kickflip – rad! – and look to see if she’s watching… but then –

BAMM! – I run right into Mitch Yablonsky. Someone skimped on the gray matter with this guy but not on the ugly… or the muscle. So he and his goons, Mike and Chuck, are ready to waste me – again – when Mr. Perry, the V.P., steps up. He’s my man. Takes away my board but whispers that I can pick it up at his office later. Good to have someone on my side!

Gotta stop here to tell you something. The coolest thing is happening today. The Xtreme Dream Games are gonna be right at my school! Right on the football field, they put up a wild set of half-pipes, quarter-pipes, fun-boxes – the works. It’s gonna be incredible, and the best thing is that Road-Rash Reiley will be there! No kidding, the champ himself! And – get this – he actually used to go to school here!

Back to my weird day – and it’s gonna get weirder, you’ll see. I’m in Mrs. Noonan’s class – we call her “The Nooner” – and she’s got this kid Gerald Snyder up there doing his science project demonstration. The kid’s a brain, but… let’s just say he’s been super-sizing his Happy Meals a little too much. So anyway, he’s going on about vectors and compounds and stuff, and half the class is just sleeping. Robyn’s just doodling, even though Gerald’s got his eye on her the whole time. Thinks he’s turning her on with the size of his brain and all that. As if! She’s my girl… even if she doesn’t know it yet.

The Nooner gets me up next. Now, I know some stuff about science – the cool stuff teachers rarely bring up. So I mix this concoction up, telling everybody it can kill a horse, and I chug it down! (Tastes lousy, but it’s harmless.) Then I get a little over-dramatic with this zombie mask I made, trying to fool people that my face is melting and stuff. Everybody screams! Well, some crack up. But I get Robyn – you shoulda seen her eyes! And, of course, the Nooner freaks out.

But then – RRRIIINNNGGG! Saved by the bell!

Finally, it’s break. I need some lunch money, so I get Mitch and his boys to put down a few bucks on a card trick, and they’re dumb enough not to know I got it rigged. So they come after me, ready to take my head off – and Mr. Perry saves me again! The guy’s too cool.

Now, this is where it gets weird.

Back in class, this weasely kid is doing this stupid volcano science demonstration up front – you know, the vinegar and baking soda thing – but he gets the chemicals wrong, and BOOM! Junk all over the room. And who does the Nooner look at?

ME! Just ‘cause I goof around a little. Okay, a lot.

And – get this – she finds a vial of the chemical the kid used in my desk! I swear I didn’t set this kid up!

Someone put this stuff in my desk and set me up!

What is Brian’s favorite sport?
a) swimming
b) skateboarding
c) BMX biking

How did Brian get lunch money?
a) he asked his mom for it
b) he mowed lawns
c) he got some guys to bet on a rigged card trick