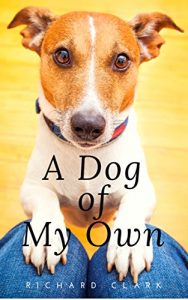 A Dog of My Own
Chapter 1
by: Richard Clark


Secret Agent Gordy Sparks peered around a dark corner. He looked out at a team of technicians, hard at work in their underground missile command center. But these weren’t NASA scientists, and this wasn’t a government institution.

These men were under the command of the evil Dr. Velkoff, and his dream of world domination was only minutes away from coming true.

Gordy knew he was the only one who could stop Velkoff. But this wasn’t going to be easy. After all, Gordy was just 12 years old.

Dr. Velkoff rubbed his boney hands together with sinister glee. “The time has come, gentlemen, to start the countdown.”

One of Velkoff’s men turned a key on his console, and a flashing button emerged. Dr. Velkoff pushed the button, relishing the moment he had so long waited for. A computer voice echoed throughout the cavernous room: “Two minutes until missile launch. One minute and 59 seconds. One minute and 58 seconds…”

Gordy crept out into the open. Taking a deep breath, he jumped over a railing and kicked Dr. Velkoff to the floor! OOF! Then, before any of Velkoff’s men could react, Gordy picked up a desk chair and smashed the main instrument console.

Velkoff wiped some blood off his lip and looked up at Gordy with disdain. “Get him!” Four of Velkoff’s henchmen jumped up and attacked Gordy – but Gordy wasn’t your average 12-year-old spy. With a roundhouse kick, he knocked the first guy down, then he came around with an uppercut punch to the next. Two down, two to go. He felled the third guy with an arm twist and a flip… but the fourth man clocked Gordy over the head, and hard.

Gordy went down, and the men grabbed him.

Dr. Velkoff got up from the floor, smiling. “Gordy Sparks,” he hissed.
“You’ll never get away with this, Velkoff!” snapped Gordy.

Velkoff hit another button, and the countdown started up again: “One minute and 47 seconds…”

The evil doctor chortled, “No one can stop me now, Agent Spar-”

11-year-old Jonas Ridley turned to see his mother, Mary, standing at their front door. Through the glass, he could see her arms full of groceries.

“Can you get the door for me?” she pleaded, about to drop her heavy load. Jonas paused the movie and jumped up to open the door for his mother. “Are you watching Canine Commando again?” Mary asked as she rushed in and plunked the grocery bags down on the kitchen counter.

“It’s my favorite movie!” said Jonas as he rushed back to the couch and started it up again, rewinding a bit to catch the part that he missed.

“No one can stop me now, Agent Sparks!”

But Gordy just smiled a little half-smile. “You sure about that?”

Velkoff’s arrogance showed a small crack. What was Gordy getting at?

Unseen by Velkoff, high above a small dog crept along a thin steel beam. He looked just like any average Rat Terrier – short-haired, big ears, compact body. But this little dog was different. He was Rascal the Canine Commando! Rascal moved in on Velkoff, quietly jumping from beam to beam and swinging from cables with his teeth.

Down below, Dr. Velkoff thought he heard something. He looked up. What was that?
Up above, Rascal froze, hiding behind a strut.

The computer voice continued to count down: “…One minute and one second. One minute. 59 seconds…”

Velkoff turned his attention back to Gordy. “Only one minute until launch.”

Suddenly, Dr. Velkoff started to suspect what was going on. “Huh?”

SNARL! Rascal jumped down from above, biting the man holding Gordy and knocking him to the ground. Gordy was free! Then Rascal leapt up and knocked Velkoff back. Velkoff slammed against a rack of monitors.

Gordy called out, “Rascal, the failsafe button!” “Get them!!!” cried Velkoff.

“Get them!!!” cried Jonas too, in his best Dr. Velkoff voice.

Jonas watched as Rascal fought off one henchman after another, tripping one, knocking over another, biting yet another.

On screen, Gordy broke free of the men and struggled with Velkoff. And having finished off the henchmen, Rascal jumped up onto the control panel.

“Ten seconds, nine seconds…” Jonas spoke along with the computer as it continued to count down to launch. Then he spoke Velkoff’s lines: “There are four failsafe buttons which must be pushed all at once! Only two men can do that!” Jonas laughed evilly like Dr. Velkoff.

On screen, Rascal looked at four blinking buttons arranged in a two-foot square formation. “Or one dog,” said Gordy and Jonas together, each cracking a smile. Gordy turned to Rascal. “Rascal, JUMP!” cried both boys.

Rascal jumped up and landed with his legs spread to push all the buttons at once, one with each paw!

The music swelled in the movie as federal agents burst into the room and grabbed all the henchmen. Then Gordy turned to Velkoff and punched him right in the face! Jonas punched into the air, but his punch grazed a lamp which crashed to the floor!

Mary looked over from the kitchen. “Jonas!”

On screen, Velkoff fell to the floor, unconscious. Then Rascal ran and jumped into Gordy’s arms. ARF!

Jonas grabbed a pillow and held it the way Gordy held the dog. “Rascal, you rascal!” said both boys.

As the movie’s music played over the end credits, Mary came over to look at the broken lamp. Clearly weary from her long day, she blew some hair out of her eyes.

“With what? Your dog-walking money?” Mary shook her head.

Mary took a deep breath. “Don’t worry about it,” she sighed. “Sometimes there’s an upside to not being able to afford anything nice.” Mary Ridley was like a lot of mid-thirties parents. In her early twenties, she’d finished college with honors and dove into the working world with loads of enthusiasm. But what followed were years of struggle for both her and Jonas’s dad, especially after Jonas arrived, and those years were written on her pretty face.

Jonas suddenly remembered something and glanced at his watch. “Oh! I’m late!” He grabbed his coat and darted out the door.

Mary watched him go, then turned back to the TV. On screen, the credits ended with “Coming Next Summer: Canine Commando II.” Mary smirked. “And I know just who’ll be first in line.”

What did Gordy need to do?
a) get a dog
b) keep Dr. Velkoff from attaining his dream of world domination
c) help his mom with the groceries

Who stopped Dr. Velkoff?
a)  Rascal, the Canine Commando
b)  Gordy
c) Jonas

What accident happened to Jonas while he was watching the movie?
a) he tripped and fell over a lamp
b) he broke a lamp
c) he dropped a lamp on his foot

What movie will Jonas go to see next summer?
a) Star Wars, part 27
b) Jurassic Park: Dinosaurs get Eaten by Tourists
c) Canine Commando II