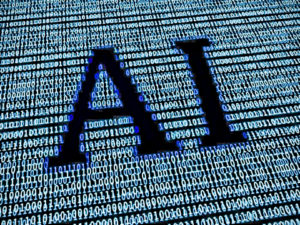 Artificial intelligence (AI, also machine intelligence, MI) is intelligence exhibited by machines, rather than by humans or other animals (natural intelligence, NI). In computer science, the field of AI research defines itself as the study of “intelligent agents,” i.e., any device that perceives its environment and takes actions that maximize its chance for success at achieving some goal. Colloquially, the term “artificial intelligence” is applied when a machine mimics “cognitive” functions that humans associate with other human minds, such as “learning” and “problem solving.”

The scope of AI is disputed. As machines become increasingly capable, tasks considered as requiring “intelligence” are often removed from the definition, a phenomenon known as the “AI Effect,” leading to the quip, “AI is whatever hasn’t been done yet.” For instance, optical character recognition is frequently excluded from “artificial intelligence,” having eventually become a routine technology. Capabilities generally classified as AI, as of 2017, include successfully understanding human speech, competing at a high level in strategic game systems (such as chess and Go), autonomous cars, intelligent routing in content delivery networks, military simulations, and interpreting complex data.

Artificial intelligence was founded as an academic discipline in 1956, and in the years since has experienced several waves of optimism, followed by disappointment, and the loss of funding (known as an “AI winter”), followed by new approaches, success, and renewed funding. For most of its history, AI research has been divided into subfields that often fail to communicate with each other. However, in the early 21st century, statistical approaches to machine learning became successful enough to eclipse all other tools, approaches, problems, and schools of thought.

The traditional problems (or goals) of AI research include reasoning, knowledge, planning, learning, natural language processing, perception, and the ability to move and manipulate objects. General intelligence is among the field’s long-term goals. Approaches include statistical methods, computational intelligence, and traditional symbolic AI. Many tools are used in AI, including versions of search and mathematical optimization, neural networks, and methods based on statistics, probability, and economics. The AI field draws upon computer science, mathematics, psychology, linguistics, philosophy, neuroscience, artificial psychology, and many others.

The field was founded on the claim that human intelligence “can be so precisely described, that a machine can be made to simulate it.” This raises philosophical arguments about the nature of the mind, and about the ethics of creating artificial beings endowed with human-like intelligence, issues which have been explored by myth, fiction, and philosophy since Antiquity. Some people also consider AI a danger to humanity, if it progresses unabatedly.

1. Artificial Intelligence is exhibited by:
a) humans
b) machines
c) dogs

2. When a machine mimics “cognitive” functions like learning and problem solving it is considered to have:
a) natural intelligence
b) a good brain
c) artificial intelligence

3. The “AI  Effect” is:
a) a naturally intelligent machine
b) whatever hasn’t been done yet
c) a machine that understands human speech

4. Artificial Intelligence:
a) has been successful since its founding in 1956
b) has had cycles of optimism and disappointment
c) has started to eclipse all other tools, approaches, problems, and schools of thought
d) both  A and B
e) both B and C

5. One of the long-term goals of AI is:
a) perception
b) general intelligence
c) manipulation of objects

6. Although AI can be a tremendous help to people, others think it is:
a) too hard to use
b) too expensive
c) a danger to humanity