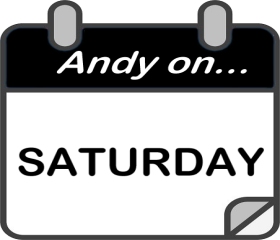 On Saturday, Andy slept. There was no alarm going off, and Mom did not call to him. If sleeping had been an event in the Olympics, Andy would be the champion. When he finally did open his eyes, it was slightly before noon. Andy stayed in bed for a few extra minutes, replaying the excitement of yesterday’s reading test, and enjoying the feeling that all was right with his world. A mighty yawn and a huge stretch, and Andy was out of bed and on his feet.

Dad always made a big breakfast for the family on Saturday, and Andy’s nose told him that today Dad was making pancakes and bacon. He suddenly realized that he was starving. After taking a moment to shove his feet into some warm slippers, Andy raced down the stairs in his pajamas, almost colliding with Mom as he skidded into the kitchen. He gave her a quick kiss on the cheek before he turned to sit down at the kitchen table.

Before Andy could take his seat, there was a knock on the kitchen door. He could see through the glass that Connor was standing outside with a big smile on his face. Andy walked over to open the door for his friend, and as he opened it, a blast of cold air hit him. The temperature had dropped sharply overnight, and the ground was covered in snow. It looked to be a couple of feet deep. Deep enough for sledding? Yes!! Connor slipped inside quickly and closed the door. His nose and cheeks were red with the cold, and he was dressed in his heaviest jacket, with the hood up over his head. Dad invited him to sit down and join them for breakfast, which, at this point in the day, was more like lunch. Connor hung his heavy jacket on the hook in the entryway and left his snow covered boots on the mat by the door. In his sock feet, he sat in the chair beside Andy at the table.

Once breakfast was on the table and everyone had filled their plates, the boys talked non-stop about plans for the day. Their goal was to figure out which area would have the deepest snow on the hills for sledding. This might be difficult to find, since all the kids in their neighborhood were probably making the same plans, and the fewer the kids the better. Too many kids at the same hill meant a long cold wait from the time they pulled their sleds to the top of the hill, to the time they threw themselves onto their sleds for the exciting, rocket fast, freezing- cold ride down.

After everyone was finished eating, and the boys had helped to clear the table, Andy went upstairs to put on his heavy clothes, while Connor waited in the kitchen, talking with Andy’s parents. By the time Andy got back to the kitchen, bundled up in his warmest jacket, a scarf, hat, boots, and gloves (with an extra pair for Connor, who had forgotten his), they were both eager to get out in the snow. Andy went to the garage to grab his sled, and Connor retrieved his from where he left it outside the kitchen door.

The snow came about half-way up their boots, so walking was a little difficult, but not too bad. The exercise helped them warm up. As they approached the hill that they had decided would best meet their needs, they saw that several kids had already come to the same decision. However, it was a really good hill, kind of steep but sloping gradually and ending in a big pasture with no trees to run into. And there weren’t really that many kids, so Andy and Connor decided that this was the right place for today’s sledding. All the kids knew each other from school, so there was a lot of talking and laughing as they all waited their turns to fly down the slope. Sometimes two of the kids would go down at once, racing to see who had the faster sled. Most of the races ended in a tie, or occasionally an upset sled. It really didn’t matter if anyone actually won. Everyone was just there to have a good time.

As the day wore on, a few kids had to go home, and a few new kids joined the group. Andy saw a familiar face in the newest group. It was Elisa. Although Andy had been talking and laughing with some other kids as they trudged up to the top of the hill a moment ago, he was suddenly nervous and didn’t know what to say, other than hello. Elisa, who had been chattering with her friends, smiled and waved before she flopped down on her sled to zoom to the bottom of the hill. Her sled got everyone’s attention. Brand new, sleek and beautiful. And it looked fast. None of the kids in town had anything like it. It was big, big enough for two people to sit on it.

Before long, Elisa was giving each of the kids a chance to ride on the sled with her. It was a blast. Andy wanted to ride on the sled with Elisa, but he was too shy to join the others who were waiting. Finally, when everyone else had tried out the sled, Elisa turned to Andy and gestured for him to come over. She asked if he wanted to ride on the sled with her. Of course he did! But he just smiled and said sure. As they zoomed to the bottom of the hill, a dog, owned by one of the kids who was sledding, suddenly bounded out in front of the sled. Andy and Elisa both leaned far to their left to steer the sled so that they would not hit the dog. The result was that they missed the dog, but the sled turned over and dumped them into the snow. They both got up completely covered with snow, unhurt and laughing from the unexpected mishap. After they brushed off the snow, Andy helped Elisa pull the sled back to the top of the hill. They talked and laughed as they walked. They even talked about sledding at the same hill tomorrow.

1) For breakfast, Dad made
a) eggs and toast
b) pancakes and bacon
c) cereal