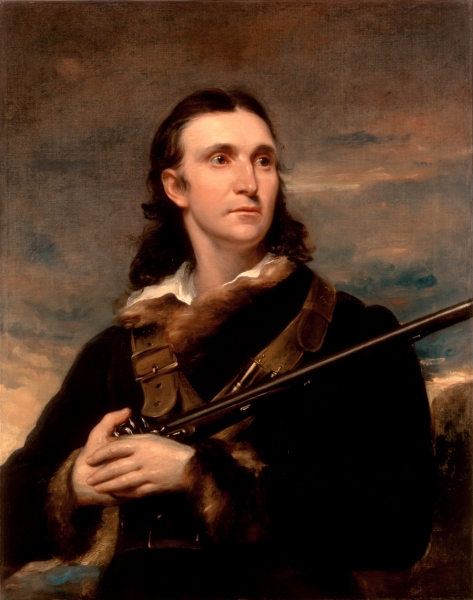 John James Audubon (April 26, 1785 – January 27, 1851) was a French-American ornithologist, naturalist, hunter, and painter. He painted, described, and put into catalogs the birds of North America. His Birds of America is a collection of 435 life-size prints. It is still a standard against which 20th and 21st century bird artists are measured.

Audubon was born in Saint Domingue (now Haiti). He was the illegitimate son of a French sea captain and plantation owner, and his French mistress. He was raised by his stepmother in Nantes, France. Early interests included birds, nature, drawing, and music.

In 1803, at the age of 18, he was sent to America to escape conscription into Napoleon’s army. He lived on the family-estate at Mill Grove, near Philadelphia. It was here that he hunted, studied, and drew birds. He married Lucy Bakewell. The couple became the parents of two sons, Victor Gifford, and John Woodhouse. A daughter died in infancy.

Audubon set up a dry goods business on the western frontier in Henderson, Kentucky. He continued to draw birds as a hobby. He was quite successful in business, but hard times hit. In 1819, he was briefly jailed for bankruptcy.

Audubon had few prospects. He set off with his gun, his artist’s materials, and a young assistant, to paint America’s birds. Floating down the Mississippi River, he lived a rugged, hand-to-mouth existence in the South. His wife earned money as a tutor to rich plantation families. In 1826, he sailed to England with his partly finished collection of bird drawings. “The American Woodsman” was an overnight success.

Audubon found printers for the Birds of America, first in Edinburgh, then in London, and he later collaborated with the Scottish ornithologist William MacGillivray on the Ornithological Biographies – life histories of each of the species in the collection. The last print of his monumental work was issued in 1838.

By this date, Audubon was famous. He traveled America several more times in search of birds, and he settled in New York City. He made one more trip to the West, in 1843, for his work on mammals, the Viviparous Quadrupeds of North America. It was largely completed by his sons. The text was written by his long-time friend, the Lutheran pastor, John Bachman, (whose daughters married Audubon’s sons).

Audubon spent his last years in senility, and he died at age 65. He is buried in the Trinity Cemetery, at 155th Street and Broadway, in New York City.

The National Audubon Society writes: “Audubon’s story is one of triumph over adversity; his accomplishment is destined for the ages. He encapsulates the spirit of young America, when the wilderness was limitless and beguiling. He was a person of legendary strength and endurance, as well as a keen observer of birds and nature. Like his peers, he was an avid hunter, and he also had a deep appreciation and concern for conservation; in his later writings, he sounded the alarm about the destruction of birds and habitats. It is fitting, that today, we carry his name and legacy into the future.”

1. Audubon is best known for his drawings and paintings of:
a) landscapes
b) Native Americans
c) birds

2. He moved to America from England because:
a) American birds were prettier than the ones in England
b) he did not want to be forced to join Napoleon’s army
c) his wife lived there

4. At one time, when business at his dry goods store was bad, he had to go to jail for:
a) bankruptcy
b) stealing
c) gambling


5. When his collection of bird drawings, “The American Woodsman” came out:
a) everyone hated it
b) he became an overnight success
c) only a few people could afford it