The Birth Of The Blues (Jeans) 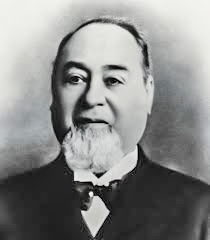 A young German immigrant, named Levi Strauss, arrived in San Francisco in the 1850’s. He brought with him a large supply of canvas, that he planned to sell to miners, for tents and wagon covers.

He soon found, however, that what the miners really needed, were tough work pants. Nothing that was available at the time, could hold up to hard use in the mines. Seeing an opportunity to meet a need, Strauss had a tailor sew the canvas into work pants. These sturdy pants were an instant success. 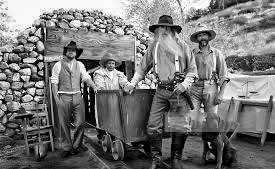 Strauss ordered more cloth from his brothers, who owned a dry-goods business in New York. Instead of canvas, they sent him a tough French cotton called serge, de Nimes. San Franciscans soon shortened the name to “denim.” Another denim-like fabric, named Genes by the French, gave Strauss’s new product a name that has stuck, until this very day, “jeans.”

Miners complained that the pockets of the pants often ripped out when stuffed with rocks and tools. Strauss’s tailor suggested using copper rivets, to strengthen the pockets. The change was a big hit, with both miners and other workers. 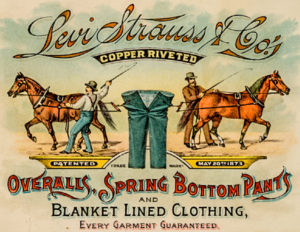 At first, jeans were a drab, brown color. This was the natural color of the fabric. Strauss thought that his pants would sell better if the color were brighter. So he began dying the cloth a deep blue. So, right then and there, the blue jeans that are so popular to wear today, were born. How many pairs of blue jeans are in your own house? 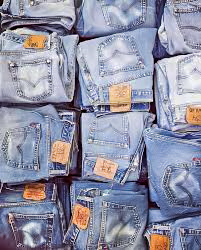 1. When Levi Strauss came to San Francisco, he brought lots of canvas fabric to make:
a) tents and wagon covers
b) boat sails
c) window curtains

2. Why did the miners need new work pants?
a) they were tired of everyone looking the same
b) they wanted a softer fabric
c) the old ones could not hold up to hard use in the mines

3. What did Levi Strauss do about this?
a) he bought fabric in San Francisco and sold it to the miners
b) he used the canvas he brought for the pants instead of tents and wagon covers
c) nothing

4. The new pants, which were very strong, were called ‘denim’ or ‘genes’ (jeans) because:
a) miners like how it sounded
b) those were the names of the French fabrics
c) “Genes” was the name of the man who invented these pants

6. The reason Strauss started dying the pants blue was:
a) because they didn’t get dirty as fast
b) because he thought the pants would sell better in a brighter color
c) the miners refused to wear red jeans