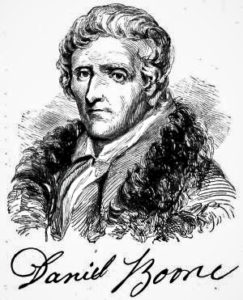 Early in 1769, Daniel Boone, John Finley, and four other strong men started for Kentucky. One of the men was Daniel’s brother-in-law. They took their guns. They carried animal traps too. They planned to bring back skins and furs to sell. The hunters rode their horses across the mountains. Soon they came to Cumberland Gap, a narrow mountain valley which led into Kentucky. The Indians used the Gap also, but the white men did not see any Indians at this time. It was many weeks before they finally saw a single Indian.

But they did see rich green meadows, which stretched ahead for miles. Silver rivers flowed like ribbons through them. In some places, there were low rolling hills, and in others, great towering mountains. The woods were thick and still. The sunlight made dancing patterns on the pine needles. Kentucky was as beautiful as John Finley had said.

Everywhere they went, the men found lots of game. There were deer and buffalo. There were fur-bearing animals, such as mink, otter, and beaver. There were many different kinds of birds. When the men went hunting, they separated into pairs. One winter day, Boone and his brother-in-law were captured by Indians. The Indians did not harm them, but they did take all of the white men’s deerskins. 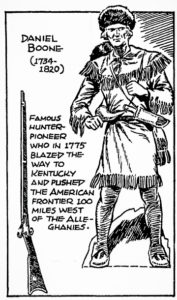 “Get out of Kentucky and stay out!” the Indians told them. But Daniel Boone did not scare easily. He and his brother-in-law did not want to leave Kentucky. But the other four were afraid. They returned to the settlements. Boone never saw Finley again. But Boone was soon joined by his brother, Squire, and a friend of his, named Alexander Neeley. Squire had promised to harvest the crops back home, and to then join them in the late autumn, with fresh horses, traps, and gunpowder. Skilled woodsmen that they were, the brothers found each other in the wilderness.

While they were hunting, the men separated again. They met every two weeks. One week Boone’s brother-in-law did not return to camp. He never did come back. Five years later, a skeleton with a powder horn beside it was found in a hollow tree. Perhaps he was wounded by an Indian. No one really knows what happened to him. 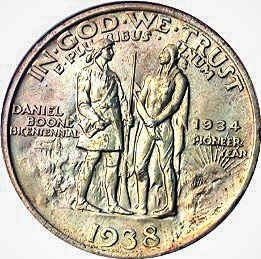 Neeley was scared. He decided to go home alone. But Daniel and Squire stayed on, all winter and spring. They hunted and trapped until they had a lot of skins. Then Squire went home to sell the skins, and to buy more gunpowder and traps.

Daniel stayed on in the wilderness. He did not mind being alone. He was never afraid. With his trusty rifle Tick-Licker, over his shoulder, he explored much of Kentucky. He was happy because the wilderness was wide open, and he felt very free. After a few months, Squire came back. Again, the brothers hunted together. At last, Daniel said to Squire, “I’ll go home with you this time. We have all the skins that we can carry. When we sell them, we’ll have plenty of money to take to our families,” Squire said happily.

Alas, it did not happen that way. Indians attacked the brothers-in-law again, when they were nearly home, and they took the skins that the brothers had worked so hard to obtain. The Boones now remained poor men. But Daniel was still happy. He was glad that he had roamed the wilderness for nearly two years. Yes, he was sorry that he had lost the skins, but he was happy that he had seen the beautiful area called Kentucky.

1. What was a reason that Daniel Boone and his group of men went to Kentucky?
a) to buy land for farms
b) to bring back animal furs and skins to sell
c) to build big houses

2. The narrow mountain valley that led into Kentucky was known as:
a) the Appalachian trail
b) the Blue Ridge Parkway
c) Cumberland Gap

3. The men thought that Kentucky:
a) was incredibly beautiful
b) looked just like the settlement they lived in
c) was too wild and mountainous to settle in

6. After that, Daniel Boone decided to:
a) go back home to live
b) that he would tell others to go home and tell other men to explore Kentucky
c) stay in Kentucky

7. Soon after this, who joined Daniel Boone?
a) his brother
b) his wife
c) his sons

9. When Daniel Boone finally started home, what happened to the skins?    a) He sold them and became wealthy.
b) The Indians took them.
c) He gave them all to his brother

10. For the rest of his life, Daniel Boone:
a) was happy that he had seen Kentucky
b) hated Kentucky
c) told everyone that they should not go to Kentucky