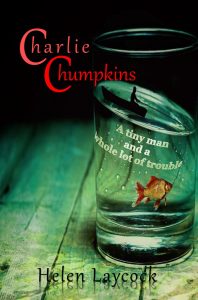 The campsite was made up of a series of large fields, some larger than others. There was an adventure playground to one side, made entirely of wood and I could see a small shop, outside which stood buckets of toys and jelly shoes.

Dad bumped the car on to the grass and drove round and round, very slowly, until he found a sheltered spot near some trees.

‘This will be perfect,’ he concluded in an expert tone.

Charlie had spent the journey in my sandcastle bucket on the back window ledge. It had been firmly wedged between the sleeping bags, so had been in no danger of toppling over.

‘Oh, look,’ said Mum cheerfully. ‘There’s a family camping next to us with a boy of about your age, Sam. You’ll have a lovely time playing together.’

Three hours later, the tent was up, sturdy and waterproof thanks to our earlier efforts.

‘Come on. Let’s have a cuppa,’ suggested Mum. ‘I think we deserve it. Don’t you?’ Her high-pitched laugh filled the canvas. We sat around the little camping table on some rather wobbly striped chairs. Suddenly, a voice called from outside.

I darted up from my seat and undid the zip which was to be our door for the next week.

Outside, stood a ginger-haired, freckled boy. I recognised him as the one from the tent next door.

‘Coming out to play?’ he asked.

‘Course you can, Sam. Off you go and play with—’

‘Richard,’ chipped in the boy.

I ducked through the tent flap, Charlie in my pocket, and followed Richard who began to race around in figure of eight movements.

‘Nee-ow,’ he droned, as he held his toy blue aeroplane aloft, making it swoop and dive in his hand. I chased after him.

Suddenly, he stopped in his tracks and turned to face me.

‘Never guess what.’ Richard seemed to be expecting a response, so I obliged with a forced tone of curiosity.

‘My dad’s got a model aeroplane. Wanna see it? It’s operated by remote control. I’m allowed to play with it whenever I want.’

Richard jogged over to his tent, put his finger to his lips and gently pressed his ear to the blue canvas.

Looking over his shoulder, he pulled up the tent zip in a trice and pulled me inside. Their bedroom section had not been zipped shut. I could see a heap of dishevelled sleeping bags inside. In the space where we were standing were numerous holdalls, the volcanic contents spilling out, and an array of clothes was strewn, confetti-like, all over the groundsheet.

Richard rummaged around until he found his dad’s plane. It was in a battered cardboard box underneath a leather jacket.

‘Got it!’ he proclaimed triumphantly as he bounded back through the tent flap, apparently unaware that he still had my company. Again, I followed him. He ran at full pelt over to the other side of the campsite to an area where there were very few tents or caravans. This was probably because the ground was quite uneven here. Richard scrambled up a small slope, lay flat on his stomach and laid the aeroplane on the ground in front of him. He still seemed oblivious of my presence as he fumbled about with the remote controls. Suddenly, it took off… and flew straight into a bush.

As I obligingly ran towards it, I found myself stumbling over a small hump. Embarrassed, I stood up, brushed the grass off my bleeding knee and automatically felt in my pocket for my chum. My pocket flattened beneath my palm.

I crouched down and peered into the grass, separating the blades in order to look for him. I caught sight of him just a little way to the left of my foot and so placed a flat palm next to him so that he could climb up. He was on his back, rubbing his head as if to say, Oh, no! Not again! As he was clambering on, I was suddenly aware of a presence behind me, and warm breath on my neck. I remembered Richard. Oh no! My secret was out.

‘What the…?’ I heard him gasp over my shoulder.

I swung round to face him.

‘You must promise not to tell anyone, Richard.’ I looked at him earnestly, then stared him in the face to show that I meant it.

‘Wow!’ he exclaimed, and before I could react, his grubby little freckled hand had reached out and grabbed Charlie roughly.

I heard a muffled yell from my little friend as Richard raced back up the slope with Charlie in one hand and his aeroplane in the other.

I just knew what was going to happen next, but I wasn’t quick enough to do anything about it. Before I could reach him, Richard had wedged Charlie into the plane and was wildly rattling the control lever with frenzied shouts of, ‘Chocks away!’

The plane soared up, up and away. I ran helplessly beneath it, my arms outstretched in a vain attempt to catch it, but to no avail.

Meanwhile, Richard was manically dancing about, whirling and twirling as he gazed upward, his eyes alight. He was shrieking at the top of his voice, ‘How about this, little man? What’s the weather like up there? How about some aerobatics?’

And, with that, he sent the plane into violent loop-the-loops, sudden turns, vertical dives and stomach-churning swoops before watching it nose-dive straight towards the ground, where it stuck, nose in the earth, tail in the air. It had a great crack across its body.

‘WHAT HAVE YOU DONE?’ I screamed at Richard.

I stared at him, anger burning in my eyes. Just how on earth was I going to find Charlie?

1. Where was Sam going with his family?
a) to the zoo
b) to a campground
c) sightseeing in the country

2. Why was Mum happy about the family camping next door?
a) they look like nice people
b) they were grilling hamburgers for everyone
c) they had a boy about Sam’s age

3. What makes you think that Richard didn’t really have permission to play with his dad’s model airplane?
a) Richard made sure his parents were gone before he went into the tent
b) there was a ‘Keep Out’ sign at the opening of the bedroom section
c) the plane was in a box under a jacket
d) all of the above
e) both ‘a’ and ‘b’
f) both ‘a’ and ‘c’

5. What did Richard do to Charlie?
a) took him back to his tent
b) hid him from Sam
c) took him on a wild airplane ride and then lost him