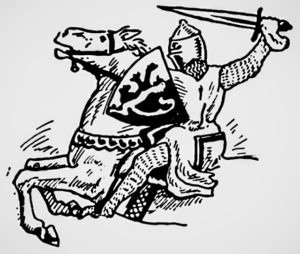 For many centuries, the sword was the chief weapon of war. Defenses against it were gradually invented. The best defense was another sword. Next, a stout shield was found to be a great help. Early shields were made of heavy leather that covered a wood framework. Later came metal shields. A defender used the shield to parry the blow of an opponent’s sword, while driving home his own weapon. The shield eventually grew larger and longer. A warrior could hide almost completely behind it. But this type of shield proved to be too heavy and unwieldy. When a battler was holding onto it, moving was both slow and very difficult.

To use a three-foot (1-meter) sword effectively, a fighter had to be within three feet of the enemy. At such short distances, however, the fighter was, in turn, easily within reach of the opponent’s sword. Being able to fight at greater distances would protect the fighters. They gained this distance by using spears, javelins, lances, and similar weapons with sharp points on long shafts. Spears were lightweight and well balanced, so that they could be thrown with great accuracy.

Longer and heavier spears were used for thrusting, rather than for throwing. They were especially deadly when held firmly in the grip of a horse rider who was moving at full tilt. With the horse, warriors gained the advantage of both speed and agility in battle. 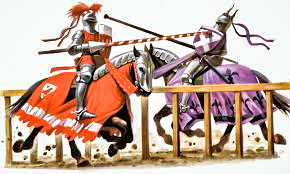 During the Middle Ages, armed and armored knights on horseback became the heroic figures of warfare. The spears that they used were so long and heavy that the knights rested them on saddle braces. At this time, playing at war became more popular than war itself. Great jousting tournaments were held at the principal courts of Europe. At these celebrated events, special jousting spears were used. They were blunt-ended, and the opponents were well covered with armor, so that little blood was ever spilled. 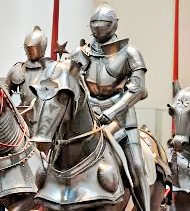 Suits of armor were cleverly made, so that overlapping steel plates allowed for the bending of joints, and for easier movement than one might suspect. Even horses were armored. A knight in heavy armor was at great risk, however, when he was thrown from a horse. On the ground, the knight could easily be surrounded by serfs, armed with pikes. Pikes were spears up to twenty-four feet (7 meters) in length. They were carried by the lowly infantry, which made up most of the fighting forces at that time. Only the rich and lordly rode out to battle in shining armor.

1. For many centuries, the chief weapon of war was the sword.  The best defense against this was…
a) a gun
b) a spear
c) another sword

2. The earliest shields were made of…
a) wood
b) leather
c) metal

3. Shields eventually became so big that a warrior could almost hide behind them.  Why was this a problem?
a) the shields were too big and heavy to move easily
b) the opposing warriors always stole them
c) the shields were such good protection that battles took a really long time to win

5. Why were spears, javelins, and lances developed?
a) so that warriors could fight at greater distances
b) it was more fun to throw them
c) they were more effective at killing the enemy

7. Heavy spears became so popular that they were used in a competition called:
a) warfare
b) jousting
c) dungeons and dragons

8. A knight who was thrown from his horse while wearing a suit of armor:
a) was safe from attacks
b) was able to get back up on his horse quickly
c) was in danger of being beaten by the serfs (laborers, often slaves)