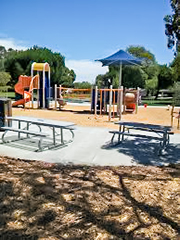 Jayla and Carlos went all around the park. They checked the jungle gym, the sandbox, the duck pond, the baseball field, and the volleyball area. They were now more than a little bit tired, so they sat down in the picnic area. Their world was about to have a major change, as they heard a voice call out.

“Hey, Jayla! Hey, Carlos! You’re my very best friends!” Both kids looked around and around. Jayla said, “I don’t see one single person anywhere near us, but it sounds like that voice is right here.”

Carlos replied, “This is weird, all right, and there isn’t anything near here that someone could hide behind.” He laughed, and suggested, “Maybe we’re going out of our minds! Should we go see a psychiatrist?” Jayla giggled. 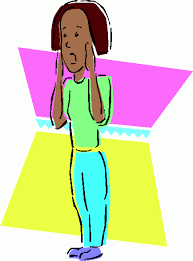 But then, three seconds later, they heard, “Guys, it’s me, Funny.” This scared them both to death. This was way too spooky, and they both instantly jumped to their feet. They wheeled round and round, but no one was there!

Then, they heard, “Don’t you guys see me? I’m here, right by the yellow trash can, next to the water fountain.”

The kids’ heads slowly turned, and they looked down, just a little bit. And right there, in front of them, was a brown dog. He was the very same size as Funny, but he looked a little bit different. 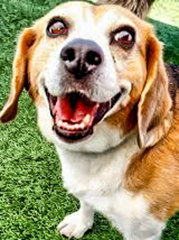 He got up and walked towards them. There was no limp, he had a chest full of hair, his tongue wasn’t floppy, and he wasn’t drooling. And his eyes were looking straight ahead. Then, the voice said, “Good, you see me. Now I don’t look so funny anymore, do I?” That was just too much for poor Jayla, who fainted on the spot!

1. What did Carlos and Jayla hear at the playground?
a) a voice
b) kids playing
c) a baseball game

2. What was unusual about this?
a) there wasn’t supposed to be a baseball game
b) there weren’t any kids at the park
c) dogs can’t talk

3. What was one thing that was different about Funny?
a) his eyes were straight
b) he was much bigger
c) his hair was all matted and dirty