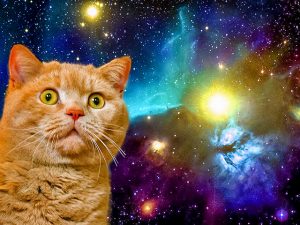 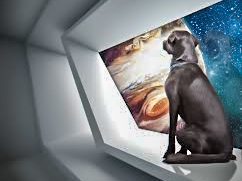 Jayla, Carlos, and Funny were walking back to Jayla’s house, and Funny was telling them all about his fascinating time on the Anubin spaceship. Carlos asked him an interesting question.

“Funny, why did the Anubins come to Earth in the first place?” Funny laughed, and he said, “It’s all about the beastly cats.”

“On many worlds, nature gives those planets only cats. What a horrible shame that there aren’t any dogs on those worlds. It’s just not right, and it’s just not fair!”

Jayla asked him, “What do you mean, ‘it’s not right’?” Funny responded sharply, “Well, the fact is that most cats are just awful beings. And can you believe that the Egyptians even worshipped those beasts. We simply had to put a stop to that, so the Anubins brought dogs to Earth. That way people could choose to bring dogs into their homes, instead of cats, since dogs make infinitely better pets.”

“Let me explain more, by starting off with a question for you. Carlos, which of your two cats do you like better? Friskie, your striped cat? Or Whiskers, your white cat?”

Carlos quickly said, “That’s an easy answer. Friskie is a much better pet, because he comes when I call, he plays with me, and he doesn’t ever claw me. He’s a completely loyal feline.” 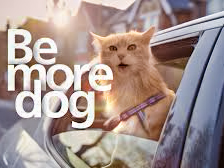 Funny instantly butted in, “You mean that Friskie behaves kind of like a dog?” Carlos replied, “I never thought about it, but you’re totally right. He DOES act way more like a dog!”

Funny continued, genuinely, “Friskie is a very fine animal. He’s that rare kind of cat that a dog can actually get along with, and he’s a good friend of mine. But I can’t stand your abominable pet Whiskers.”

“By the way, do you guys know the worst cat around here? There’s a big orange cat, on Red Street, named Mittens, and his family should have named him, ‘Monster.’ ”

Jayla and Carlos exchanged looks, and they started guffawing, somewhat out of control. Jayla said, “I think we met Mittens this morning, and yes, he was definitely, undeniably crazy.”

Funny inquired, “Was he riding on top of a dog?” Carlos snapped back, “Yeah! Like a cowboy on a bronco.”

Funny looked down at the ground and shook his head, saying, “That poor dog, Draco. He just doesn’t have any guts. None of the other dogs will put up with Mittens, but Draco is always getting taken advantage of. Frankly, the way Mittens treats old Draco embarrasses all of the dogs in the neighborhood.” 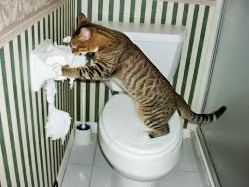 “Look, let’s be completely honest about this: here’s what your average cat is like. They scratch your furniture, they hide when you call them, and they jump up on your clean counter and table, with filthy cat litter on their paws. They shed, and get hair on everything, and then they puke up disgusting hairballs. By the way, did you know that they do that on purpose, when they are mad at you? They bite and scratch, and they hiss at your neighbor’s baby. They sneak into your closet, and knock everything over, and they shred up toilet paper, all over your floor. But worst of all, they are just plain lazy. Did you know that some cats sleep as many as twenty hours, every single day? Worthless critters, most of them!”

Jayla and Carlos were in tears, they were laughing so hard. Funny had nailed it. He had just perfectly described the average cat, even though they still loved their cats, regardless of their pets’ quirks. 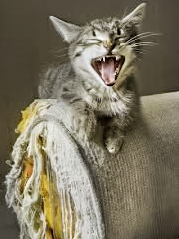 Funny finished his spaceship story. “So the Anubins help many worlds to have a better balance of pet choices. Most cat lovers just get fooled. Those sneaky cats purr, and they act all sweet, and they seem so soft and fuzzy and lovable. Then behind your back, they are destroying your house.”

Carlos added, “So the reasons that cats and dogs don’t get along very well is really an ‘outer space thing’? The Anubins brought the dogs in, to balance out the cats?”

Funny replied, “Exactly. But please be extremely clear about this. Dogs NEVER start an argument with a cat. It’s ALWAYS the cat. They insult you, over and over again, and you just can’t take it anymore.” 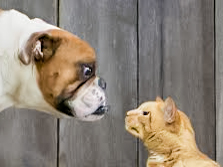 Jayla said, “Wow, that’s pretty mean, all right. Now I see why you don’t get along with most cats!”

They walked for a minute, without saying anything, and then Carlos asked another question. “By the way, Funny, how did all of your health problems get fixed? You really look fantastic!”

Funny answered, “Oh, those Anubins have really advanced doctors. They knew how to fix me up. You know what else they did for me?”

Jayla said, “No.”  Funny continued, “They provided for me a tool for lifelong learning. Do you see the little scar in my neck? They put a powerful computer chip in there, and it’s hooked up to my brain.”

“It’s way better than the computer chips on Earth. It will let me learn all kinds of amazing things, throughout my whole life, and I love to learn! I have no idea how many new powers I can acquire, by learning from the Anubin chip!”

“And I’m not supposed to tell humans about any of these powers, but you guys are my best friends. I might sneak a secret to you, every once in a while.” 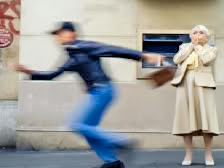 Just then, their talk was stopped by a loud cry. About a hundred feet away, they saw something awful, as an elderly lady yelled out, “Please! Help! Help! That thief is running away with my purse!” There was a man running down the street, very fast.

Funny snapped, “Jayla, call 9-1-1 on your cell phone. FAST! Then watch and learn. Right now, Super-Funny gets to try out a couple of his new powers!” Then he called out to Jayla’s and Carlos’s brains, and he also included ‘talking to’ the crook’s brain, “You’re about to meet an Anubin! That means you’ve had it, you rotten thief!!” 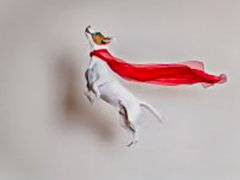 1. Why did the Anubins come to Earth?
a) so that people would have choices between dogs and cats
b) to get rid of all cats
c) to make all cats nice

4. What is Funny’s opinion of cats?
a) He likes most cats
b) He only likes a few cats
c) He has never met any cats

5. Why does Funny look different now?
a) the Anubins gave him a bath
b) He is not really Funny
c) the Anubin doctors fixed him up

6. What is the purpose of the computer chip in Funny’s neck?
a) It will let him learn things for the rest of his life
b) It will help Jayla find him the next time he gets lost
c) He can use it to communicate with his friends on the spaceship

7. What do Jayla, Carlos, and Funny see on their walk home?
a) a spaceship
b) Mittens and Draco
c) a man taking a lady’s purse