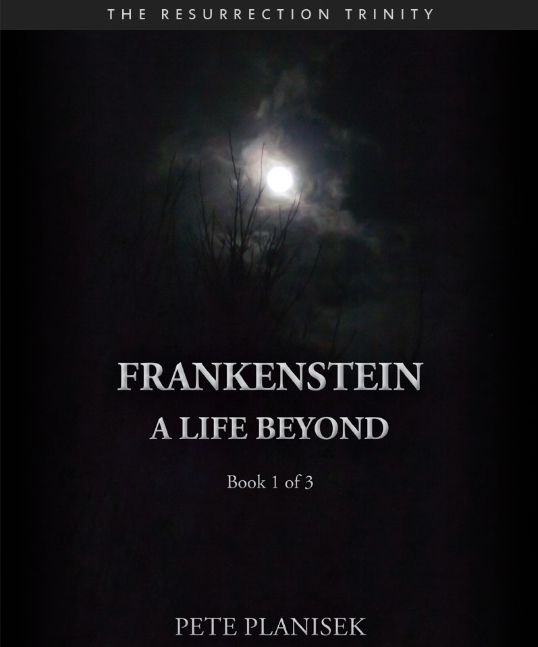 Frankenstein
A Life Beyond

Excerpt from Book 1 of 3 of The Resurrection Trinity

By the following day, the French frontier lay behind him and the road to his beloved stretched beyond the horizon. He doubled back, switched horses and clothing, and varied his patterns as often a possible, but as threats failed to emerge, Ernest began to feel as if all he was doing was needlessly wasting time. He never should have come. As his temper steadily darkened, the bone-chilling drizzle which began to fall did nothing to brighten his spirits. By the fourth day, mere hours from Lyon, the ambush he dreaded happened.

Rounding yet another rock-hemmed corner, lost in thought, distracted by the steady rain and lax attention, he almost didn’t notice the weeping child until the horse was on top of her. The horse jerked back at her sudden appearance. The girl, no older than eight, was dressed in a green coat with a colorful, patterned scarf upon her head. Her tears were indistinguishable from the rain, but her sobs were unmistakable. She looked as startled to see the horse and rider as they were to see her.

At this the sobs ceased, and she slowly turned her head up to face him fully.

Ernest was still puzzling over these strange words when he perceived the first sound of a pistol’s hammer being pulled back, followed immediately by others. He turned to find nearly a dozen men, who’d been hidden among the trees and rocks, pointing various weapons. They were a motley sight. Some appeared half-starved, while others were clearly well fed. All were dressed in a blend of modern French apparel and tattered, colorful bits of cloth. Their appearance, and the few words they spoke, left little doubt, that if these men held any allegiances in this world, it was to some rabble band of gypsies.

They efficiently covered one another as they forced Ernest down from his mount and disarmed him. These were seasoned, hardened thieves who would not hesitate to shoot if their intended victim caused them too much trouble. Offering no protest or resistance, Ernest’s reward was a harsh blow to the head, which struck him senseless for quite some time.

He awoke bound and gagged in the confines of a rocking cart transporting him. The motion, combined with a sudden wave of double vision, made Ernest very ill before passing out again. The second time he awoke, rough hands were pulling him from the back of the cart. One of the bearded highwaymen cut the rope around his ankles then yelled in a harsh, unfamiliar language, gesturing behind Ernest towards a dark hole in the rock face.

As he entered, the darkness enticed the darker corners of his mind. He was returning to the womb in a sense—into the dust and the rock, the minerals from which he was comprised. It was a good place to meet death, this natural tomb. Perhaps these gypsies meant to hold him for ransom. Or would his fate be sealed here while his loved ones fought a useless battle to retrieve Ernest alive? For a moment, he imagined Ailis explaining to their child how her once loving husband had abandoned them both: how he’d failed them, just as he’d failed all those he’d loved before and who were now gone.

Ernest suddenly felt old, disconnected from life here in the womb of Mother Earth. Was he ready to join them, those souls in Geneva?

But these were whispers in the dark. Something within him knew that being here had a purpose greater than ransom or fear. The earth seemed to be holding its breath in anticipation of what was to take place.

The light from the surface faded. The scoundrels halted, motioning him forward with their weapons. When he was far enough away, they threw a lit torch at him, seeming to confirm his original fears. He was destined to die here. But as it arched and clattered to the floor, Ernest realized that the torch was not meant to harm, but to help. It was clear that he was to proceed deeper into the caverns, alone.

How many human eyes had ever witnessed this place? The subterranean is apart from the world in a way that even the ocean depths are not. It echoed silence, breathed lusty gasps of musty air, and kept the secrets of the earth safe from the curiosity of man. Thankfully, no cave dwellers appeared— no bats, bugs, or common vermin strayed into the light, but he was being watched by eager eyes. The knowledge of unseen eyes was unnerving enough, but the accompanied sensation of intimacy made it worse. Ernest was watched—pace by pace. He halted, uncertain if what waited ahead could be worse than trying to sneak up and waylay the gypsies.

He’d stopped near a large chamber off the main passageway. Perhaps another way could be found to escape. Maybe his captors had not explored these caverns thoroughly. Hope coursed through Ernest and seemed to warm his chilled bones. The realization that the damp cold had begun to caress him with unseen, embracing hands frightened him. Ernest broke from the main tunnel and entered the large chamber to his left, only to halt after a few steps. A motionless mirror covered the floor, and mist hung thick in the echoing darkness. A fathomless lake stretched before Ernest, mocking his feelings of hope.

A voice both harsh and familiar shattered the solace of the place.

“At last you have come.”

The damp cold embraced him again, and his grip on the torch momentarily faltered. Ernest swung it round, but the mist and the echoes obscured the speaker.

The voice seemed to shift locations and surround its victim in the echoing chamber.

“One who has known you and your family for some time.”

Ernest fought to process these words, but in the end, allowed the silence of the cavern to fill his head. He gave no response. This seemed to please his captor.

“You are not here to die, though it would present no challenge if I chose otherwise,” the voice starkly promised.

The voice seemed close but far. Ernest peered into the gloom, but only the disembodied voice answered his pains.

“You are here so we can help each other.”

Ernest cast the torch away. It would be easier to find the devil without it.

“No, you are an echo of pain from a time long since past,” he cried.

“Then you do remember me.”

A brief flash of cold, yellow eyes in the window entered Ernest’s mind.

“I remember you. Show yourself and I’ll help you, friend.”

Ernest was reaching for a rock when one struck his hand. The voice seemed to dance through the gloom.

“How alike you are.”

Ernest hurtled a rock to where the sound seemed to emanate, but it clattered uselessly against the wall of the cavern. As he reached for another, a massive hand gripped his. The stupendous strength easily overpowered Ernest’s resistance. He could not turn to see what grasped him, but knew the other’s earlier threat had not been an empty boast. The hand drew him closer to a giant being, and in harsh, hushed intonations it declared:

“You will help me, and in return, I will help you. I will assuage your doubts and your fears. I will grant you the peace you seek. And I will provide you the means to discover the answer to the question which has plagued your existence for ten years: the fate of Victor Frankenstein.”

1. How did Ernest get ambushed?
a) his horse was shot
b) the road signs were tampered with so that he lost his way
c) when he stopped to help a little girl, thieves kidnapped him

2. When the kidnappers forced Earnest to enter a dark hole in the rock face, it seemed to him to be a/an:
a) abandoned mine shaft
b) a natural tomb
c)  bear cave

3. Ernest was afraid that Ailis would think that:
a) he had gotten lost on the trail
b) that he was dead
c) he had abandoned his family

6. What question had bothered Ernest for ten years?
a) Who was the person in the cave?
b) What was the fate of Victor Frankenstein ?
c) How would he get home to his family?

Special thanks to Pete Planisek for providing us this chapter from his wonderful book.