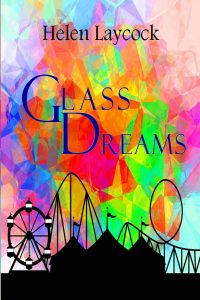 Jake could see the big top long before they actually arrived at it. It was covered in wide stripes of red and yellow and peaked in about six places on the top. It was shaped like a round-cornered rectangle.

As they approached, they could see lots of people milling about.

Muscled men in white vests and black trousers were carrying boxes, and coils of rope hung over their shoulders; others were stretching up from ladders, replacing bulbs around the big top. When they spoke, they shouted in short, barked syllables.

Some of the gymnasts were limbering up; one girl was reading as she sat in the splits position and another was folded in half, it seemed, with her head on her knees and her fingers around her ankles.

Others were practising their moves and routines on the grass.

Jake found it hard to move on; it was like watching a show.

Khala pulled him sideways as Jake continued to look over his shoulder.

Other performers – at least that’s who Jake assumed they were – were sitting on plastic chairs drinking tea. Some of the women were in dressing gowns with rollers in their hair. A much less interesting spectacle, and not the glamorous image he had of circus people.

Long trucks were parked near the double arched entrance to the big top. They had flaps at the side which would later open up to serve refreshments. A few of the caterers were rubbing down the serving areas with soapy water. The odd cackle of laughter between them indicated that they were old friends.

A family, Khala had said.

Lots of canopied stalls and small tents were dotted around, all there to take the public’s money.

Further back was the living accommodation – a variety of caravans and large recreational vehicles. Washing hung from make-shift lines, dog bowls had been placed at the base of the steps and even a few large potted plants had been placed on the grass in front of the caravans, as if to confirm that this was Home.

‘Quick, behind here,’ said Khala suddenly, gesturing to Jake to hide behind a small stall edged with bunting and unlit multi-coloured light bulbs. Jake was aware of voices coming closer.

‘It’s Gino,’ she whispered and held a finger to her lips.

Gino was holding a whip and was standing next to a small girl.

Like a seal, she balanced on one hand with her legs and body hovering above.

‘How does she do that?’ whispered Jake.

Khala nudged him and put her finger on his lips.

‘Over!’ Gino shouted. ‘Over, over!’ and the girl began to bend backwards from the waist, arching her back until she was almost bent double.

‘Turn, Molly, turn!’ Gino shouted impatiently, cracking the whip near her fingers as she rotated.

‘You’re wobbling,’ he hissed and flapped the end of the whip on her ankles. She did not make a sound as she collapsed to the grass. She rubbed at the red weals that encircled her ankles like bangles.

‘Not good enough. Get up there, idiot. You’re going to get this right if I have anything to do with it.’

Gino slapped the whip either side of her as if he was making a sparkler dance. The whip became invisible as it arced over her head, but the cracks were like gunshot as it came down and made Jake wince.

Molly fixed her mouth into a smile and Jake watched, horrified, from behind the stall. He looked at Khala questioningly, but she just kept her finger against her lips and turned back to watch little Molly. She would find her later.

Khala had tears in her eyes and she bit her bottom lip.

After another harsh slap of the whip on her arm, the girl fell again, but without whimpering or speaking, she started all over again, lifting her body up in the air supported by only one hand while Gino flicked the whip at the ground nearby and tapped his foot. His lips were tight and his teeth bared.

Khala beckoned Jake to follow and, ducking, they ran to a quieter part of the field.

‘He treats us all the same. He just wants us to be the best,’ she added, although Jake sensed she was keeping something back.

Where does this story take place?
a) in a circus tent
b) on the circus grounds
c) in a large recreational vehicle

What did the people Jake saw seem to be doing?
a) taking down the circus so they could move on
b) setting up for the circus
c) taking a fun vacation

Why did Khala tell Jake to hide behind a stall?
a) Gino, the wicked ringmaster, was coming
b) They wanted to surprise their friend Gino
c) they wanted to sneak into the stall

What did Gino do as Molly practiced for her performance?
a) he praised her
b) he told her she should practice more
c) he hit her with the end of his whip