The Universe In A Nutshell

(a brief excerpt), by Stephen Hawking 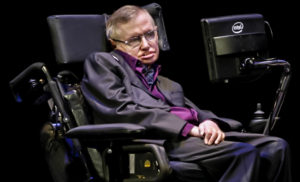 The difficulty with determinism arose when I discovered that black holes aren’t completely black. As we saw in Chapter Two, quantum theory means that fields can’t be exactly zero, even in what is called the vacuum. If they were zero, they would have both an exact value, or position at zero, and an exact rate of change or velocity that was also zero. This would be a violation of the uncertainty principle, which says that the position and velocity can’t both be well defined. All fields must instead have a certain amount of what are called vacuum fluctuations (in the same way that the pendulum in Chapter Two had to have zero point fluctuations). Vacuum fluctuations can be interpreted in several ways that seem different, but are in fact mathematically equivalent. From a positivist viewpoint, one is free to use whatever picture is most useful for the problem in question. In this case, it is helpful to think of vacuum fluctuations as pairs of virtual particles that appear together at some point of spacetime, move apart, and come back together and annihilate each other. “Virtual” means that these particles cannot be observed directly, but their indirect effects can be measured, and they agree with theoretical predictions to a remarkable degree of accuracy.