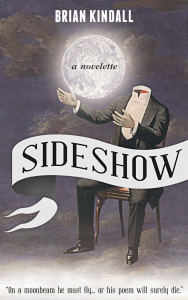 THE ONLY HEROICS I had in mind that day were of the self-gratifying variety most preferably performed on a good sturdy bed. Said bed was to be housed in an establishment dubbed the Milkmud Chateau, and my voluptuous bedfellow was to be none other than one Velva Velvetonia – a one-legged whore whose word-of-mouth advertising had reached the farthest corners of the Territories. The contortional capabilities of this boudoir artiste were reputed to be the stuff of a man’s most creative carnal imagination. Especially if the man involved had been traveling for the last month with no company but his horse and lonesome meditations.

Such was my case.
And such were my intentions.
Until I was distracted by that damn placard.
“Hmm!”
Meet the Marvel from the Moon, it read, Poppy the Pinheaded Poet.

Beneath the words on the signboard was painted the rather crude image of a man with an absurdly small head. A handful of folks milled in front of the sign before the doorway of a large oilcloth tent. They chortled and pointed at the picture.

It was not the concept of microcephaly itself that held me enthralled. I had been to enough carnivals to suspect there was something illegitimate about the placard’s freakish claim. Sideshows had a reputation for being disreputable. When the skirts are lifted on a bearded lady, she more often than not turns out to be no lady after all. And those Siamese twins who make the gullible gape in wonder prove typically to be conjoined by no more than an elaborate strapwork cinched up tight beneath their shared clothes.

But people want to believe the unbelievable, and I suppose I am just as vulnerable as the next earthling when tested on this particular aspect of my human nature. At any rate, there I stood, scratching my jaw while wondering what a fellow bard from the moon might have to teach me about our common craft. For above all my other aspirations in life, I – Mister Didier Rain – fancied myself a romantic poet.

I shoved my hand into my pocket and fondled my purse. I was fresh back from a job delivering a government surveyor to Fort Boise and had most of my payment still with me. Of course, said coin was meant to go to Velva. I would need every penny to get in her door and fulfill the fantasies for horizontal refreshment I had so intricately developed over the last weeks. Although she was a debatably reduced woman, Miss Velvetonia’s monopodial services did not come at a reduced rate.

I was about to continue on my way to the Chateau when a man in a bowler hat stepped from the tent and started in with his promotional enticements.

“Fair citizens of Milkmud!” he barked. “Prepare yourselves to be astonished!”

“You say this little head is from the moon?” asked a man.

The man snorted incredulously. “And so how the hell did he ever get down here on earth?”

Bowler Hat smiled. “Fair people, I assure you that you will understand completely once you lay eyes on dear Poppy and hear him speak. For God himself likely sent the pinheaded angel down to grace us with his wise and lovely poems.”

“Is his head really all that tiny?” asked a lady.

“See for yourself.” Bowler Hat held his arm to the tent door. “Only one dollar.”

About half the crowd scoffed and wandered away into the streets of Milkmud. The other hapless half paid up its money and entered the patch-worn marquee.

Rather fortuitously, I somehow found myself in the latter group.

I shuffled along with the pack, leaving the sunlit world behind. One felt to be sucked into an ominous dominion – a pit hole of sorts, a drearful dungeon. The air smelled of piss and soured straw. We all blinked and winkled our eyes in the poor light.

A rope stretched between a pair of stanchions to divide the room. The audience was meant to stay on one side, while the showpiece and his handlers remained on the other.

We all stood peering at the unassuming spectacle before us. A very tall and muscular fellow with a smug expression and a riding crop stood next to a chair. His head nearly brushed the canvas ceiling.

Slumped in the chair was what one guessed to be a man. It was hard to say for sure. The body was lumpy and misshapen as a bag of potatoes, but it was clothed in a man’s loose trousers and shirt, with puffy hands extending from the sleeves. The fellow’s head was covered with a basket. He wore iron cuffs on both ankles attached by a padlock to a length of chain running out to a weighty iron ball, the likes of which one normally sees on prisoners.

“Ladies.” Bowler Hat sweetly addressed the feminine portion of the audience. “Perhaps I should have warned you. What you are about to see might be… shall we say…unsettling to your more delicate sensibilities.” He held his palms open to the crowd. “I apologize and want to give you opportunity to leave before the freak’s fearful appearance is revealed.”

One lady took a step toward the door, but then reconsidered. “Will I get my dollar back?”

The lady harrumphed, crossed her arms, and stayed put.

“Ladies and Gentlemen, what you are about to witness can be seen nowhere else on earth. This man-like creature we present to you fell from the moon to the Sahara Desert. He was found by a tribe of camel drivers, broken and disoriented, muttering bits of rhymes. He is a one-of-a-kind oddity. A lunar anomaly.” He held up his hand. “Prepare yourselves.”

His assistant reached over and took hold of both sides of the basket. After a teetering moment of suspense, Bowler Hat dropped his hand and his helper lifted the cover.

The ladies all gasped.
As did most of the men.
But no one turned away.
The scene was too mesmerizing.

There, atop that lumpy figure of a hominid, rested, as advertised, a most unusual bonce. It was generally normal on the bottom half, but it minimized quickly above the eyes and ears, narrowing on all sides so that it formed a short conical dome. It looked to be about a third of what might be considered a normal sized head. The man’s hair was shaved away along the sides, with only a black top-bob drawn up with a tie on the very peak, looking somewhat like the spray of a tiny follicular fountain.

The pinhead blinked and then fixed his gaze on the ground at our feet.

Bowler Hat laughed. “Isn’t he a wonder? Have you ever seen anything more grotesque and amazing?”

The pinheaded fellow’s face was white as bleached flour. His expression was blank, if not a tad melancholy.

“All the way from the moon!” Bowler Hat explained. “And can you guess what such a creature might eat?” He glanced into the crowd, waiting for an answer.

People chuckled at the notion of the pinhead sitting down to a prime cut.

At that point, the taller man reached into his coat pocket and brought out a plug of moldy green cheese. He handed it to the pinhead who then, reluctantly it seemed, began to nibble on it.

Bowler Hat said, “Everyone knows the moon is made of cheese.”

Bowler Hat walked over to his attraction and waved his hand over its unusual head. “Now Poppy’s brain is not like yours or mine. Not at all. On the moon there are fewer needs for intelligence and sophisticated communication. Cheese is everywhere for the eating, and he has no enemies to outsmart. Only the smallest bit of intellect is needed to get through the day.”

Cheese crumbs tumbled from Poppy’s lips as he continued to gaze vacantly at the ground. There was arguably a quality about him in that moment that smacked of moron.

“With such a small brain, poor Poppy is incapable of making complicated sentences. He is reduced to the simplest form of expression.” Bowler Hat wiggled his fingers over Poppy’s head. “Poetry.”

That was the moment I began to build a strong dislike for Bowler Hat.

Belittling Poetry, and we poets by extension, was the sure sign of a mean-spirited ignoramus.

“Now listen carefully. What you are about to hear is the very voice of the moon!”

Meet Didier Rain – that antihero with noble aspirations, that poet with the fickle pen, that eager paramour ever in search of someone to love. In this adventure-laden novelette, we glimpse the rogue as he was in those days prior to his now famous exploits in DELIVERING VIRTUE and FORTUNA AND THE SCAPEGRACE (due out summer 2018). Prepare yourself to be amazed at Rain’s cleverness, daring, and near-to-honorable acts of madcap heroism as he lends a helping hand to a friend. For what self-respecting bard (even when distracted by the promises of a voluptuous one-legged trollop) would deign to allow the mistreatment of a fellow poet, no matter how much a freak of nature that fellow poet might be? This novelette gives us Didier Rain at his finest as a flawed human being. It shows us the man before he became the Chosen One, and maybe even grants us insight into why the gods would eventually pick him for that exalted station so sung in his further novels. So sit back and get to know the man behind the dubious legend. Prepare yourself to be amused! 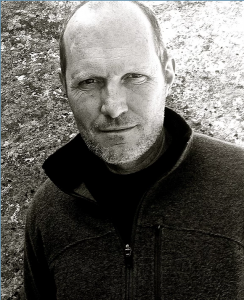