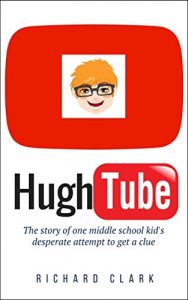 The story of one middle school kid’s desperate attempt to get a clue.

What don’t I get? Pretty much everything.

How to dress cool? I don’t get it.

How to avoid getting bullied?… to know when to shut up?… to choose the right after-school sport? I don’t get it.

How to ask out a girl? I definitely don’t get it.

Which is why I started HughTube. What’s HughTube? First of all, my name is Hugh. That explains the ‘Hugh’ part. The ‘Tube’ part, of course, refers to video.

HughTube is my video blog.

And yeah, I know everybody has a video blog these days. But mine’s different. I don’t just shoot myself playing Minecraft or whatever, narrating my exploits mining diamonds and killing Ender Dragons.

I shoot everything. My whole life.

Sure, I cut it all down later for my weekly blog post, but for myself I want my whole life recorded for later analysis. Because if I ever want to learn how to get it, I’m going to have to go over it on video – over and over – till I eventually get it right.

Before HughTube, I tried everything I could think of to help me get it. I was at my wit’s end. Nothing was working. In short, I was desperate.

But now that I’m recording my life, things are beginning to change – gradually. It’s not that I’ve suddenly stopped doing stupid things, I’ve just started to learn from doing those stupid things. And I figure it’s about time. I’m Hugh Hollenbeck, 14-years-old, officially an 8th-grader. It’s time to grow up.

So, how does all this work? I have this tiny camera attached to my glasses, on the top right where it doesn’t look too goofy. It sends a wireless video signal to my phone in my pocket, and it records audio through a little mike too. So basically it sees what I see and hears what I hear.

Also, like a Minecraft video, I narrate my life in real time. Nobody can really hear me – I talk quietly. People can see me talking to myself, and they sometimes give me weird looks, but the fact is that everybody knows what I’m doing. You see, I talked my Social Studies teacher, Ms. Knapp, into making HughTube my class project!

But, of course, HughTube is much more to me than just a class project. It’s become my lifeline.

And nothing better demonstrates that than what happened to me last week. It was the middle of October, so school – and HughTube – had been going for about a month. I stood outside the school entrance, narrating quietly into my mini-mike, surveying the scene as students started to arrive in the morning.

“Monday, October 9th. The start of another week at Smoky Ridge Middle School. I arrive without incident. But the day is still young.” To the untrained eye, everything looked normal. But if you really wanted to know what was going on, you had to look closer. And nothing or nobody looks closer than HughTube. It’s like an X-ray eye, allowing me to see deep beneath the surface of middle school life.

I heard the slap-slap-slap of someone’s flat-footed walk, and I turned to see Jonas Werb heading for the front door. Jonas is kind of chunky and looks like he never showers – because he doesn’t. He fumbled with his backpack, over-stuffed with books. I continued my HughTube narration: “There’s Jonas lugging in all his books ‘cause he’s afraid to leave anything in his locker.” Jonas has never had his books stolen from his locker, but he always suspects somebody will find out his lock combination. He uses the locker during the day, but even then he always tugs on the lock five times to make sure it’s really locked. It’s really locked, Jonas. Go to class.

Then I heard a car door slam, and I turned to see Trey Amaral getting out of his mom’s pricey SUV. “Trey arrives to begin another wonderful day of popularity and smugness.” Trey has it all – money, looks, athletic skill – and he never lets anybody forget it. I always wonder why people with everything always brag about having everything. Isn’t just having everything enough?

Now Molly MacLaine showed up. She is cool, always looking at everyone and everything with inquisitive, unafraid eyes. Her friend Skyler joined her, and they immediately started talking and laughing. I whispered into my mike, “As usual, Molly confabs with Skyler, sharing some secret that nobody else can hear. What could they be talking about? Note to self: Find out.”

It was almost time for class, so I decided to head inside. “Entering building at 8:57 A.M. Beyond these doors lie all the secrets, contradictions and unwritten rules of modern middle school life.” I stopped just inside the doorway and looked around the school’s large atrium. It was filled with students rushing to their first classes. “In this teeming mass of humanity, I will eventually find the answers to all those secrets, contradictions and unwritten rules.

What is the name of the main character in this story?
a) Jonas
b) Hugh
c) Trey

What is the blog post about?
a) his whole life
b) how to play video games
c) skateboarding

Why is he recording at school?
a) because he is doing it secretly
b) because his friends told him it would be cool
c) because his teacher is letting it be his class project in Social Studies

Why is this project so important to him?
a) he will get an ‘A’ in Social Studies
b) he will have a lot more friends
c) he is trying to figure out his life