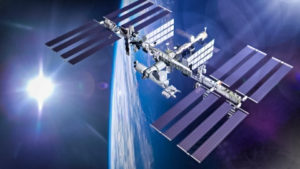 The International Space Station (ISS) is a habitable artificial satellite in low Earth orbit. It follows the Salyut, Almaz, Skylab, and Mir stations, as the ninth space station to be inhabited. The ISS is a modular structure, whose first component was launched in 1998. Now the largest artificial body in Earth’s orbit, it can often be seen, at the appropriate time, with the naked eye.

The ISS consists of pressurized modules, external trusses, solar arrays, and other critical components. These various elements of the ISS structure, have been launched by American Space Shuttles, as well as by Russian Proton, and Soyuz rockets. Budget constraints led to the merger of three space station projects, with the Japanese, Kibo module, and Canadian robotics. In 1993, the partially-built components for a Soviet Russian space station, Mir-2, the proposed American Freedom, and the proposed European Columbus, merged into a single multinational program. 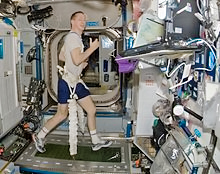 The ISS serves as a microgravity, and space-environment research laboratory, in which crew members perform experiments in biology, human biology, physics, astronomy, meteorology, and other fields. The station is suited for the testing of spacecraft systems, and for equipment that will be required for successful missions to the Moon and to Mars.

The station has been continuously occupied for twelve years and 157 days, having exceeded the previous record of almost ten years, or 3,634 days, held by Mir, in 2010. The station is serviced by Soyuz spacecraft, Progress spacecraft, the Automated Transfer Vehicle, the H-II Transfer Vehicle, and the Dragon spacecraft. It has been visited by astronauts and cosmonauts, from fifteen different nations.

The ISS program is a joint project among five participating space agencies. These are, NASA, the Russian Federal Space Agency, JAXA, ESA, and CSA. The ownership and use of the space station is established by intergovernmental treaties and agreements. The station is divided into two sections, the Russian orbital segment (ROS), and the United States orbital segment (USOS), which is shared by many nations. 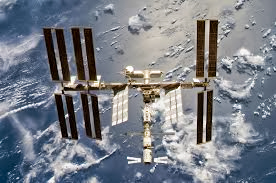 The ISS is maintained at an orbital altitude of between 330 kilometers (205 miles) and 435 kilometers (270 miles). It completes fifteen-point-seven orbits per day. The ISS is funded until the year 2020, and it may be able to operate until the year 2028. The Russian Federal Space Agency (RSA, RKA) has proposed using ISS to commission modules for a new space station, called OPSEK, before the remainder of the ISS is deorbited.

1. The International Space Station (ISS):
a) is sometimes visible with the naked eye
b) can only be seen with a very strong telescope
c) is not inhabited

2. The ISS was developed:
a) only by the United States
b) only by Russia
c) through the combined efforts of many countries

3. The ISS is also used as a:
a) weapon
b) restaurant
c) space-environment research laboratory

4. The longest time that the ISS has been continuously occupied is for:
a) over 20 years
b) over 12 years
c) over 2 years