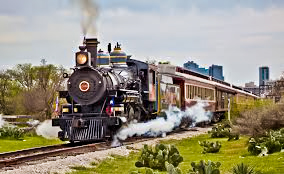 The “iron horse” that pulls a railroad’s passenger or freight cars, is a power plant on wheels, complete in itself. The term “locomotive,” is used for this type of power plant, only when it can be uncoupled from the rail cars. Some power plants are part of a passenger car. They may be self-propelled, rail-diesel cars. Others could be streamlined electric trains. The term locomotive is not used to refer to these types of power plants. 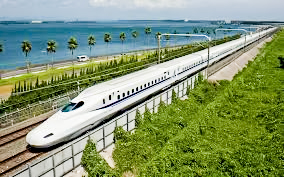 Until the 1950s, the steam engine locomotive, ruled supreme. In North America, Europe, and much of the rest of the world, the steam locomotive has since been replaced by the diesel-electric locomotive. In areas of high rail traffic, as along the East Coast of the United States, and in Central Europe, many rail lines have been electrified, and they now use electric locomotives. Today, steam engines are used only in countries such as China, where coal is much cheaper or more readily available, than oil.

Many large locomotives actually develop enough power to supply a small city. Most of the time however, only a small fraction of this power is needed to pull a train. Once it is underway, a train needs only a few pounds of pulling power, to keep one ton of its weight in motion. Full power is needed at first, to start the train, and then to pull it up a steep grade. To start a long train, the locomotive first backs up, to loosen the couplings between cars. In this way, one car after the other, begins moving forward. A long string of tightly coupled rail cars cannot be moved all at once. 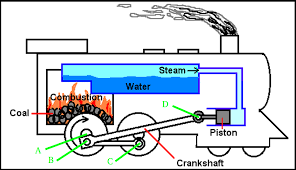 The old steam locomotive is driven by a steam engine. Steam from the boiler is fed to the engine’s cylinders, to move the pistons back and forth. Connecting rods from the pistons, then move the driving wheels. The firebox at the rear end of the boiler, is fed with oil, or coal. 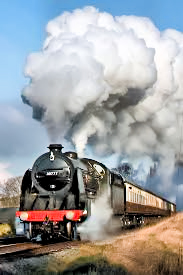 In a large locomotive, the oil or coal is stored in a tender, or a separate attached rail car. The tender also holds the water that is turned into steam. The exhaust from the steam cylinders is directed up the smokestack, to create a heavy draft for the boiler fire. The discharge of the used steam, from the cylinders, is controlled by valves. The stop-and-go release of the steam, up the stack, makes the noise, that is called the locomotive’s puffing.

1. The ‘iron horse’:
a) is a strong machine
b) is a power plant on wheels
c)  pushes the rest of the train

2. If a power plant is part of a passenger car or a streamlined electric train it is not:
a) very strong
b) really a train
c) called a locomotive

3. The steam locomotive has been replaced in most of the world by the:    a) diesel-electric locomotive
b) nuclear-powered locomotive
c) coal-burning locomotive

5. Once underway a train usually:
a) needs only a small amount of its power
b) continues to use all its power
c) runs out of power quickly

6. An old steam locomotive is driven by steam that comes from
a) barrels of steam stored on the train
b) water on the train that is heated to steam by burning coal or oil
c) an electric engine

7. The puffing noise of a steam locomotive is caused by:
a) men smoking pipes on the train
b) the train trying to get up a steep hill
c) the release of used steam through the smoke Stack.