Our solar system is a wondrous mix of celestial bodies.  The sun is at the center, and our eight planets orbit around it.  The majority of planets have moons that orbit around them, as well.  And two of our system’s moons are actually larger than our smallest planet!

The planets (other than our own Earth) are all named after Roman gods.  The smallest sphere is Mercury, which is the closest to the sun.  Poor Mercury is a huge ball of rock, with no atmosphere.  Its surface is riddled with craters, due to the impacts of countless meteors throughout eons and epochs of time.

And where could one find a more inhospitable environment?  When part of Mercury faces the sun, the heat is unimaginable, made even more unbearable because of the power of the sun’s solar winds.  Yet the other side is so cold that it is close to absolute zero, the very lowest temperature possible in the universe.

As we head further away from the sun, our next neighbor is Venus.  Although it is also a firm, rocky body (close to the size of Earth), it has a substantial atmosphere, unlike Mercury.  But the air on Venus is nothing like the life-enabling air of our own home planet.

Greenhouse gases abound on Venus, and its dense ether makes it the hottest of our planets.  It can burn to over 750 degrees (F) on the surface.  And you thought that the broiler in your kitchen’s oven was hot, at a mere 500 degrees or so?!  By the way, neither Mercury nor Venus has a natural satellite of any kind in orbit around them.

Earth and its moon are next-closest to the sun, but we’ll skip Earth, since we live here, and we obviously already know a lot about our own home planet.

Next out from the sun is the mysterious Red Planet, Mars, home to untold “little green men,” if you follow science fiction through the last century or so.  Mars’ surface is colored, as it is, due to large amounts of iron oxide in its soil.  Instead of calling it the “Red” planet, we could also call it the “Rusty” planet.

But part of what is so captivating and compelling about Mars is that there is evidence of water within its domain.  It is measurable, even now, in its famous polar icecaps.  And geological photos suggest that great flows of water once made their way along its surface.

Why did the water dry up?  Why is the atmosphere now mostly carbon dioxide, at a percent so high that it would be deadly to humans?  Who knows, maybe there is now an advanced civilization living underneath the surface of Mars.  Perhaps their scientific capabilities allowed them to find solutions for continued life, despite calamitous changes that must have occurred, dramatically changing their home planet’s climate. 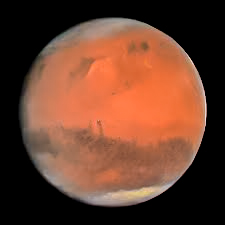 Finally, just think about this.  Civilization, as we term it, has only been around on Earth for a very brief 5,000 years or so.  That is but a fleeting sneeze in a cosmic timeline that is billions of years long.  Did Mars have a civilization a hundred-thousand years ago?  One-million years ago?  One-billion years ago?  Are we, ourselves, descendants of Martians, who once exploited the technology of interstellar space flight, in order to escape their own planet’s climatic demise, thus finding greener pastures on the next-closest planet to the sun, Earth?  Isn’t this fascinating to ponder?

1. Most  of the planets in our solar system are:
a) named after the Greek gods
b) have no atmosphere
c) named after Roman gods

3. One of the most recent discoveries about Mars is that:
a) the red color comes from Iron oxide in the soil
b) there is evidence of water
c) it is inhabited by an advanced civilization