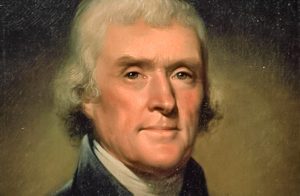 Thomas Jefferson was the third president of the United States. He was also the author of the Declaration of Independence, and the Virginia Statute for Religious Freedom. In an age of greatness, Jefferson was noted for his curious mind. He was a farmer, scientist, architect, and inventor, as well as an important government leader. He helped the United States to get started, and his plans for the future helped the young country to successfully grow. Many of the good things that Americans enjoy today, have come from Jefferson’s devotion to human rights.

Jefferson was a tall, straight-bodied, loose-jointed person. He stood and walked straight, and his shoulders were always square. He had hazel eyes, and a long high nose. No one ever thought of him as handsome. His hair was reddish, becoming sandy as he grew older. And unlike other gentlemen of his day, he never wore a wig.

In the fashion of his time, Jefferson dressed in a long dark coat, a ruffled cravat (in place of the modern necktie), a red waistcoat, short knee breeches, and shoes with big bright buckles. Except in his days of courtship and married life, he paid little attention to clothes. When he was president of the United States, Jefferson made a habit of personally exhibiting plainness, both in his outward appearance, and in matters of ceremony.

Jefferson was a courteous person, bowing to everyone he met. He was reserved, and no one ever called him by his first name. He was a very poor public speaker, in a day of great, orators. He talked in a thin fine voice. He loved music, played the violin well, liked to sing, and he usually hummed or sang, as he walked or rode. A good horseback rider, he often rode for pleasure, when most other people generally rode, only as a means of travel.

About thirty-seven years after Jefferson’s death, Abraham Lincoln described the American government as, “of the people, by the people, and, for, the people.” He was defining the kind of government that Jefferson, more than any other official, had made possible. Even Jefferson’s closest coworkers thought of human rights as including the protection of life, and of liberty, and above all, of private property. Their use of the words “all men are created equal,” unfortunately left out the inclusiveness of racial minorities. There is much evidence that Jefferson did not exclude them.

“Give the people light,” said Jefferson, “and they will find their own way.” When he stated this, he meant, all, of the people. 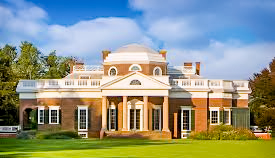 1. Thomas Jefferson, the 3rd president of the United States, was the author of the :
a) Constitution
b) Declaration of Independence
c) Gettysburg Address

2. Besides being a politician, he was also:
a) an artist
b) a hunter
c) an inventor

3. Jefferson was unusual because, unlike other important men of his day, he never wore a:
a) wig
b) coat
c) a necktie (or cravat)

4. Jefferson was known as a good:
a) public speaker
b) dresser
c) horseback rider

5. Jefferson believed that the concept of “all men are created equal” referred to:
a) only white men who owned land
b) only men and not women
c) everybody

6. The name of Jefferson’s house in Virginia is:
a) the White House
b) Monticello
c) Mt. Vernon