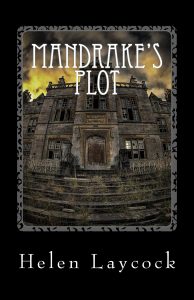 St. Agatha’s was mostly in darkness. An odd light flickered here and there. Mandrake followed them up the rocky slope and all three clung to the shadows as they made their way round to the front of the school. Mandrake located a huge iron key on his belt ring and swiveled it in the lock. The great oak door creaked open and the girls found themselves once again in the tiled hallway. There was no one in sight. Mandrake gently closed the door with the quietest of clicks and they made their way down the dark paneled corridor to the door of their bedroom. It suddenly looked inviting when compared to the chamber beyond, but straight through they would have to go. However, when Mandrake stopped at the chamber door he shook his head.

‘Don’t you have a key for this one, Mandrake?’ asked Evie.

He shook his head again.

The girls looked at one another in despair.

‘We’ll have to get it from Miss Blackthorn,’ said Mia.

‘She took the one we found. That must be the only one.’

‘Miss Blackthorn! Are you serious? You mean, break into her room where she’s sleeping and find the key?’

‘Well, have you any other ideas?’

‘We could break in from outside again,’ suggested Evie.

‘No, we might make too much noise if we bang on the wall from outside.’

‘Mandrake,’ asked Evie, ‘do you have a key to Miss Blackthorn’s room?’

‘Could you show us where it is and let us have the key? We’ll give it back to you again.’

Mandrake looked unsure. He didn’t want to get into trouble.

‘We could come and visit you again,’ smiled Mia. ‘That would be nice, wouldn’t it?’

Mandrake smiled a droopy smile and beckoned them to follow.

Once again, they crept through the building, veiled in darkness—back along the corridor, past the main entrance and beyond, where a small flight of stone stairs on the left curled up to the staff’s quarters. Mandrake pointed up.

‘Her room’s up there?’ whispered Evie. ‘Which one is it?’

Mandrake lowered his hand and nodded.

Keeping their backs to the cold stone wall, the girls edged up the stairwell which spiraled round and round. On the first landing were several doors. The girls jumped back as one of them opened abruptly.

It was Miss Seraphina with a towel under her arm, wearing a tartan dressing gown and matching slippers. She lumbered through another door, slammed it firmly and hummed the tune ‘Inchworm’ as she took a shower.

‘She’s up late,’ whispered Mia. ‘Quickly, let’s get up the next flight of stairs before she comes out.’

The stone staircase seemed to disappear into a black hole as it took the girls up to the next level. There was one door only on this landing.

‘This must be it,’ whispered Evie. ‘Listen.’

The girls put their ears to the wooden door and listened. The sound of steady snoring could be heard on the other side.

Slowly and carefully, Evie nudged the key into the lock. Her hands were shaking. Suddenly, clink! She had knocked a key out of the lock on the other side. The girls were as still as statues, hardly daring to breathe.

They continued to listen. The snoring had stopped and a snuffling sound could be heard.

‘That nearly woke her!’ said Evie. ‘Wait for the snoring to start again!’

Sure enough, a minute later, it was as strong and regular as ever. Evie turned the key, a fraction at a time until she heard a deep ‘clunk’, then, taking the doorknob firmly in both hands, she turned it clockwise and held it in that position until she had pushed the door open a little and could let go. She was careful to feed it slowly back through her hands until it was back in position.

Nodding at each other, they both peered round the edge of the door. The room in front of them was a small study with a large wooden desk and a filing cabinet. Beyond that was an open bedroom door. It was dark, but they could make out a single bed in the middle of the room in which the snoring figure slept. There was a small table either side of the bed and a bookshelf on either side of those. On each small table was a china pot with a lid. It was all symmetrical, of course.

Step by step, the girls crept nearer to the bedside tables.

Evie lifted the lid of the pot to the left of the bed and felt inside. There was the measuring tape and rings worn by Miss Blackthorn. Mia went to the other side and lifted the lid of that pot. Inside was her key ring. Using her fingers as deftly as she could, Mia gathered the keys into a tight handful, taking care not to allow them to jangle and, as quietly as they came in, the girls crept out, leaving Miss Blackthorn’s door unlocked.

They gasped as they came out, for there was Mandrake waiting for them on the landing. He led the way down, putting his finger on his lips as Miss Seraphina bustled out of the shower room back to her own room, her hair wrapped in a towel. They jogged the rest of the way, feeling at last safe in familiar territory.

‘Would you lock us in, Mandrake?’ asked Mia, thinking how strange it should be that she was volunteering to be locked into such a terrible place. Mandrake nodded.

1. What kind of building was St. Agatha’s?
a) a church
b) a courthouse
c) a school

2. How did the girls get into Miss Blackthorn’s room?
a) they had the key
b) Mandrake had the key
c) they found the key in the hallway

4. What did they hear in Miss Blackthorn’s room when they put their ears to the door?
a) laughter
b) the television
c) snoring