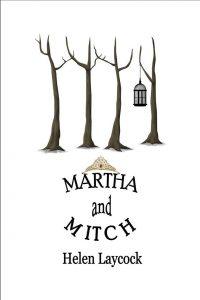 ‘So, uh, Martha, what are your plans for today?’

‘Well,’ began Martha politely, ‘I thought I might go outside for a while.’

‘Ah, you don’t want to do that, Martha, my dear. I was nearly blown off my old bike on my way over here this morning. Talk about blustery! My dress was up round my chin!’

Mrs. Crust laughed heartily at that image of herself for at least a minute. She caught sight of Penelope glaring at her and quickly pulled herself together, smoothing down her apron and adjusting her hair.

‘But no, seriously, it’s blowing a gale out there. Look at those leaves swirling about. Good job your father’s installed that leaf machine to get rid of them. There’d be thousands to sweep up otherwise. No, Martha, you’d be better off staying indoors today.’

‘Utter rubbish!’ interjected Penelope. ‘The child looks dead on her feet. The fresh air will do her good and wake her up. She needs some colour in her cheeks.’ Penelope got up from the table, wandered over to the window and looked out. After a minute, she turned abruptly to face Martha. ‘In fact, I think I shall take a little turn with you myself.’

Martha shuddered and looked to Mrs. Crust for support. ‘But, Mrs. Crust, didn’t you say it was too—’

‘Nonsense!’ snapped Penelope. ‘Go and get your coat.’ She marched out of the dining room.

Martha nodded silently and went to get her coat, wondering what on earth would be in store for her when she was alone with Penelope. All she hoped was that Mitch was awake and watching out for her.

In fact, Mitch was still sleeping as Martha and Penelope made their way outside. Penelope walked briskly beside Martha, gripping her arm tightly, but looking, it seemed, at the lawn around them. Martha desperately wanted to wriggle away, but was afraid of arousing Penelope’s wrath. She tried to steer her stepmother directly away from the playhouse, but did not want to be too far away in case she needed Mitch.

Penelope suddenly drew to a halt. They were not in any particular part of the garden in which Martha spent time. In fact, they were right next to a grille of the leaf-vacuuming machine. All around them, every five seconds, leaves were sucked down these grilles and taken away to a collecting place via pipes and tunnels underneath the garden. Eventually, they were macerated by a huge machine which spat them out as dust. There was a gentle humming noise as it operated.

Penelope made a show of looking around then put a gloved hand up to her right ear.

‘Oh dear’—she looked at Martha and wrinkled her brow—‘I seem to have dropped a diamond earring down the grille.’ She dabbed at her eyes with a lace handkerchief and looked down. ‘And they were a wedding present from your father. He will be devastated.’ She stole a look at Martha. ‘Would you have a look for me, dear, and see if you can see it sparkling down there?’

Martha reluctantly dropped down to her knees and peered through the grille with her hands cupped around her eyes. It was quite dark down there. Below, she could feel the warm whoosh of air as a batch of leaves flew past, but nothing was glittering.

‘I’m sorry, Penelope, but, as far as I can see, there’s nothing there,’ she said.

‘Oh, but you must look harder. I distinctly felt it drop and I’m positive it’s down there. Perhaps if we lifted off the grille and you felt around with your hand…?’ Martha was not taking the bait. Penelope decided to take the more emotional route. ‘Your father would be so upset if he thought I’d lost it.’ She eyed up Martha who wasn’t now certain if Penelope was telling the truth. She so didn’t want her father to be upset.

‘OK, I’ll try again.’ Martha tried to lift up the grille, but it was screwed down.

‘Try this,’ Penelope said, removing a screwdriver from her coat pocket. Martha, surprised at Penelope’s foresight, took it apprehensively and, with great difficulty, removed the grille. She lay down on the grass and plunged her arm deep inside the hole.

‘That’s it! That’s it!’ yelled Penelope excitedly, grabbing the screwdriver from Martha. ‘Feel around for it. Have a look, too. Put your face in.’

Martha, whose ear was flat on the grass, turned to look directly into the hole and as she did so, Penelope seized the moment and fed Martha’s kicking body into the opening. Using the screwdriver, she deftly screwed tight the grille cover. Then, leaning down and looking through the bars, she sneered, ‘And don’t think anyone will come looking for you there. I’ve already written a note for your father who, incidentally, won’t be back for another week’—she lied—‘to say that you’ve run away! Watch out for the rats!’

And she disappeared from view.

At the beginning of the story, what did Martha want to do?
a) read a book
b) sit by the fire
c) go outside

How did Mrs. Crust feel about that idea?
a) that Martha should read a book
b) that it was too blustery to go outside
c) that she would like to sit by the fire too

How did Martha feel about being alone with Penelope?
a) Martha felt scared and nervous
b) Martha was glad of Penelope’s company
c) Martha was angry

How did Penelope get Martha in the leaf-vacuuming machine?
a) she told Martha it needed cleaning
b) Martha hid there by herself to get away from Penelope
c) she told Martha she had dropped a diamond earring down there

Who did Martha hope would come to help her?
a) Mrs. Crust
b) Mitch
c) her father