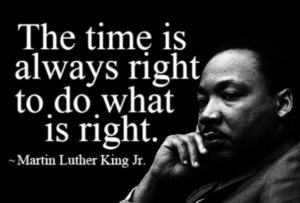 Dr. Martin Luther King, Jr. was a great leader. He inspired many people. He brought about changes that are important to everyone in the United States. In fact, he is known around the world. He was the youngest person to win the Nobel Peace Prize. That is a prize given to a person who is important to the world. It is a peace prize. He wanted people to change things peacefully. He thought that violence only led to more problems.

Dr. King used a way of changing things called non-violent protest. He saw that people were not being treated fairly. He protested for civil rights. When he led marches, people were angry. But he was determined. Even though people shouted at him, he kept marching. 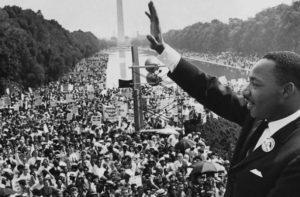 People who had been afraid to protest before were encouraged. They joined him. He was able to give them confidence. Together they would overcome. Soon, thousands of people were with him. He was changing America.

He organized boycotts. A boycott means that people do not buy something, or shop at a store, or use a service. The boycott he led was the Montgomery Bus Boycott. Before that boycott in 1955, African- Americans could not ride in the front of buses. They had to sit or stand in the back, even if there were seats in the front. Only whites could have those front seats. It took months, but they won. They got the right to sit anywhere in the bus.

Dr. King influenced many people. He reached them with his books and speeches. He gave a very inspiring speech in Washington, D.C. People call it his “I Have a Dream” speech. In it he told about what he had seen, the changes that had happened, and what would happen in the future. 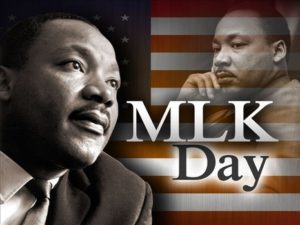 Today the United States celebrates his life with a special holiday every year. On that day, people remember what he accomplished. They think about how he has made a difference to everyone in America.

1. Dr. King was the youngest person to win:
a) a championship boxing match
b) the Nobel Peace Prize
c) a presidential election

2. When he led civil rights marches, he urged the people to:
a) protest without violence
b) fight back
c) fight with each other

3. Before 1955, African-Americans could only ride:
a) in the front of the bus
b) in the back of the bus
c) in their own cars


4. In his “I Have a Dream” speech, Dr. King told people:
a) about the dreams he had a night
b) about nightmares he had
c) about changes for African-Americans that had happened and would happen in the future