“Shelby! Darby!” called Mother F. Squirrel.  Her twin children were playing tag in the big tree where they lived.  They came slipping and sliding along the branch where their mother waited for them.  Mother let a moment pass for them to catch their breath before speaking.

“Children, I have decided that we need to move,” she began.

“Oh, no!” wailed Shelby.  “I like it here and I am just getting to know where everything is!”  Darby looked rather nonplussed but was quiet.

“No, I’ve made up my mind and there will be no arguments!” answered their mother.  “This tree is wonderful, but there are fewer trees around here every day, it seems.  Yesterday a huge machine moved into the bush beside us and men with saws got out and started to cut the trunks on the biggest trees.  Soon there won’t be enough trees for us to safely fly back and forth.”

With that she gave them instructions to gather up two cheekfuls of nuts to take with them, while she would do the same.  They would be hungry when they found a new home and probably wouldn’t have time to look for any supper.  Signalling for them to follow, she climbed to a high branch and soared downward to the next tree.

Darby was right behind her and Shelby brought up the rear.  They went quite a long way in this fashion, and then Mother stopped and turned around to face her twins.

“We should keep going in this direction, but we need to cross this big, busy street to get to those trees on the other side. I need to think of a way to get over there.”  It was a bit difficult to understand her with the two cheekfuls of nuts, but she spoke slowly and they nodded at her to show they understood.

Shelby looked around quickly and excitedly started to chatter, “MFFP! MMMF!” he hiccupped as he tried to speak. Mother and Darby just stared at him, their eyes wide.

“Shelby, take some of those nuts out your cheeks! We can’t understand a word you’re saying!”  said Darby, and Mother came closer to hear him better.

“Okay, there,” he said, carefully putting a couple of nuts beside him on the branch, where they wouldn’t roll off.  “Look, down there!  That nice-looking lady is helping those children cross the road.  Maybe we can run really fast and get over there with them!”

“What a good idea, Shelby!”  said Mother.  Shelby felt very happy when she said that.  “We’ll need to get closer and then run for it at just the right time.  Follow me and don’t do anything original.  Darby, you stay behind me and then Shelby will come after you.  We better stay very close together.  Okay, let’s go!”  And she started going lower on the tree trunk until they were together on the far side of the trunk about six feet from the ground.

“Now!” she whispered, and scampered quickly toward the sidewalk.  Darby and Shelby were close enough to be her shadows.  The crossing guard lady had raised her sign and was waving a group of children across, while several cars stopped and waited.  Mother and Darby were already on the opposite sidewalk when a big ball came bouncing toward Shelby. One of the children had dropped it and now was chasing it, with the crossing guard lady holding her sign high, hoping the cars would keep waiting.  Shelby did a U-turn to avoid being knocked over by the ball, and when he turned back, Mother and Darby were gone!

Shelby panicked and ran as fast as he could toward the sidewalk and up a tree.  He kept going all the way up, up, and then came to an abrupt halt.  There was no more tree to climb!  He had climbed up a telephone pole!  He froze, not knowing what to do next.  He nearly fell off the pole when a raucous voice shouted at him. 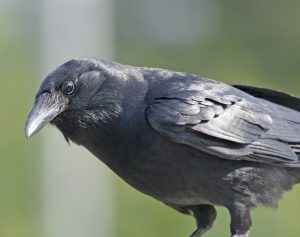 “What do you think you’re doing?”  It was an enormous black bird, with a mean look in his eye.  “What kind of silly animal are you, anyway?”

“I….I….I’m a squirrel!  A flying squirrel!!”” he managed to blurt out between hiccups, remembering to speak carefully around his stuffed cheeks.  The big black crow let out a scornful squawk.

Shelby didn’t wait a moment longer.  He scurried partway down the pole and found the nice-looking crossing guard lady standing at the bottom looking up at him.

“It’s okay, little fellow,”  she said in a soft voice. Shelby understood immediately that this was his chance and that she was protecting him.  “Come on, you can do it.”

He glanced upward to see where Darby and Mother were, and slipped and slid down that pole like there was no tomorrow!  He ran faster than he had ever run before and almost flew up the trunk of the tree where they waited.

They didn’t waste any time, but just climbed up really fast to fly to the next tree.  There were many more trees in the direction they took and they got safely to a lovely forest before it started to get dark.  Mother took her time to pick out the best one to use as their nest tree and they carefully took the nuts out of their cheeks, choosing one each to eat right away.

The F. Squirrel family slept soundly that night in the new nest.  Shelby dreamed of rolling balls and big black birds, and said a grateful thank-you to the nice-looking crossing guard lady who had helped him in his moment of need.

2. Shelby got the hiccups because he was:
a) laughing.
b) crying.
c) frightened.
d) silly.

3. The crossing guard lady was:
a)

busy chatting and didn’t notice anything.
b)

finished her shift so she left.

1. What was happening around the nest tree that caused Mother to decide to move?

2. Did you sympathize with Shelby for wanting to stay where they were?

3. Would you look forward to moving, or be frightened by the whole idea?

4. Do you make sure the cars have stopped too, or do you think that’s up to the crossing guard?

5. When the crow threatened Shelby, was running away the smartest thing to do?

6. Was Shelby taking a chance when he let the crossing guard lady help him?