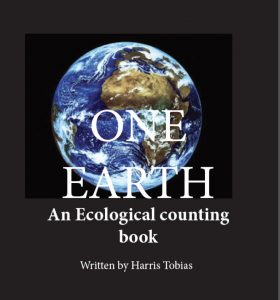 1. One Earth —
Spaceship Earth, our home. So far it is the only planet we know with abundant life. It is a jewel in a cold, dead cosmos. We should treasure it, it is the only home we have. 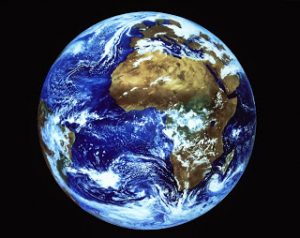 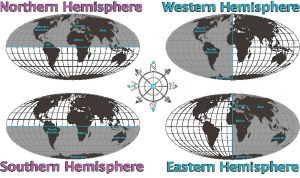 2. Two hemispheres —
East and west, north and south. You can divide the Earth into day and night, summer and winter. The angle of our orbit around the sun divides the seasons and defines the poles.

3. Third planet from the sun —
Our planet is in the sweet spot for life to develop. A place where water is liquid and the climate is not too hot and not too cold. This is called the “Goldilocks zone” and, as far as we know, it is extremely rare. 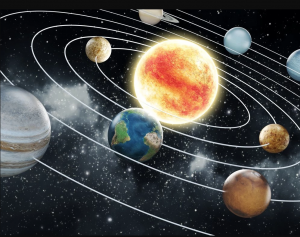 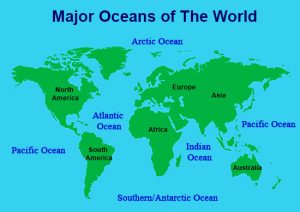 4. Four oceans —
Historically, there are four named oceans: the Atlantic, Pacific, Indian, and Arctic. However, most countries—including the United States—now recognize the Southern (Antarctic) as the fifth ocean. We live on a watery planet–Our planet is over 70% water.

5. Five layers of the atmosphere —
The atmosphere is divided into five layers. It is thickest near the surface and thins out with height until it eventually merges with space.
1) The troposphere is the first layer above the surface and contains half of the Earth’s atmosphere. Weather occurs in this layer.
2) Many jet aircraft fly in the stratosphere because it is very stable. Also, the ozone layer absorbs harmful rays from the Sun.
3) Meteors or rock fragments burn up in the mesosphere.
4) The thermosphere is a layer with auroras. It is also where the space shuttle orbits.
5) The atmosphere merges into space in the extremely thin exosphere. This is the upper limit of our atmosphere. 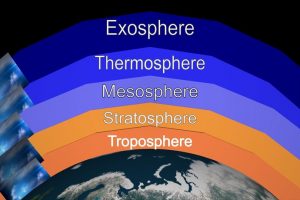 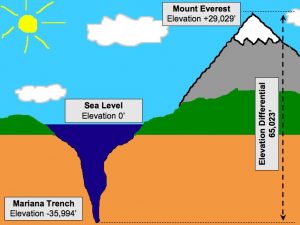 6. Six miles high and six miles deep —
Mt Everest is the highest mountain on Earth. It is almost six miles high. The deepest ocean trench, The Mariana Trench, is more than 6 miles below sea level. 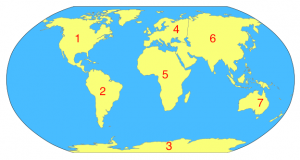 8. Eight inches (seal level rise since 1880). Eight feet of seal level rise is predicted before the end of the century. Global warming is responsible for raising sea level. As the Earth warms, the oceans expand and the glaciers melt. Rising seas dramatically increase the odds of damaging floods from storm surges.

9. Nine Billion human beings —
9 billion people are expected to inhabit the Earth by 2050. How will we feed that many people? How will we house them all? Where will we put all the garbage? What can be done to limit population growth? 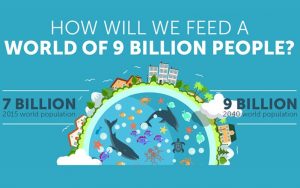 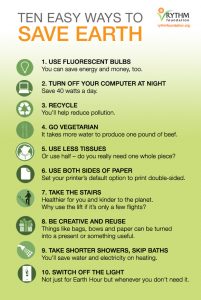 10. Ten things you can do to help save the planet. Can you think of any more?

11. 11 million living species. How many yet to be discovered? With so much loss of habitat, how can we preserve our planet’s biodiversity? 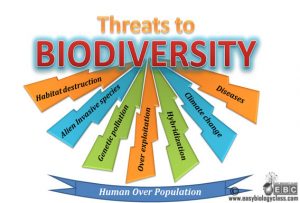 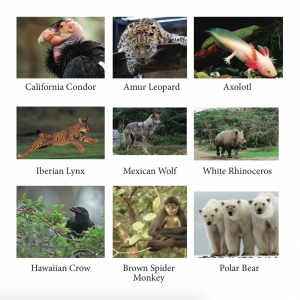 Children have become disengaged from nature and we need to reintroduce them to the pleasure that it brings. If we do that they will care for it. Through the simple act of planting a tree we can open their eyes to nature’s beauty. — Dame Judi Dench

Take Time to listen and talk about the voices of the earth and what they mean—the majestic voice of thunder, the winds, the sound of surf or flowing streams. –Rachel Carson

We do not inherit the Earth from our ancestors; we borrow it from our children. –Author Unknown

The number of Sophie the Giraffe toys sold in France in a single year is nine times the number of all the giraffes that still live in Africa. –Brooke Jarvis, NY Times

The Earth does not belong to man; Man belongs to the Earth. This we know. All things are connected like the blood which unites one family. Whatever befalls the Earth befalls the sons of the Earth. Man did not weave the web of life, he is merely a strand in it. Whatever he does to the web, he does to himself. — Chief Seattle

Special thanks to Harris Tobias for providing us this wonderful book.