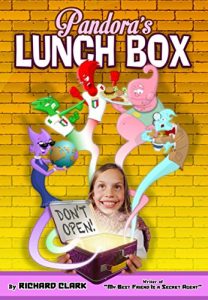 WHAP! The cafeteria door swung open as Randy Cornbluth stepped inside. The biggest, toughest kid in Greenwood Middle School, 13-year-old Randy ploddingly headed for his usual table in the back, a huge lunch bag and thermos in his hands. The crowd of hungry students parted like the Red Sea to let him by.

When Randy arrived at his table, he noticed two kids already sitting there. He wasn’t happy about it. He glared at them through a haze of anger, and the two kids split fast. Sitting down, Randy reached into his bag and pulled out an apple, some cookies, a can of soda, a bag of chips (potato), a bag of gummy worms (extra slimy)…

…and a HUGE sandwich. The biggest sandwich you’ve ever seen. Randy ogled it with love as he started to unwrap the three layers of cellophane that strained to hold it together. For him, the meaning of life lay in his hands between two thick slices of pumpernickel.

But Randy wasn’t the only one staring at the sandwich. At a nearby table, two prying eyes looked the sandwich up and down with a truly hungry curiosity. Those eyes belonged to Pandora Little, an intense young girl with blonde pigtails and a haphazard sense of fashion. But she didn’t want to eat Randy’s sandwich – she just wanted to know what was in it!

For all of her 12 years, Pandora had always wanted to know everything about everything. Those new shoes her dad just bought? “I wonder what they would look like painted purple!” All those pickle jars at the grocery store? “I wonder how high I can stack them up!” That flooded quarry out in the woods? “I wonder how deep it is!”

Yes, Pandora’s curiosity had always kept her life interesting – and always gotten her into all kinds of trouble.

This time promised to be no exception. She sat in the cafeteria staring at Randy’s sandwich, hatching a deviously clever plan to finally find out what Randy kept hidden between those two thick slices of pumpernickel. Next to Pandora sat Lyle Mertz, her best friend and reluctant partner in crime. They’d been friends since they were toddlers when Lyle’s family moved in next door. But Lyle didn’t share Pandora’s obsessive need to know everything. In fact, most things kind of scared Lyle.

And Pandora’s deviously clever plan to reveal the contents of Randy’s sandwich terrified Lyle. “Do we really have to do this, Pandora?”

“Don’t you want to know what’s in Randy’s sandwich?” Pandora asked sincerely. In her eyes, how could he not?

“I can live without it,” answered Lyle. “And by that I mean, if I ever found out what was in Randy’s sandwich, Randy probably wouldn’t let me live.”

Randy finally finished unwrapping his pumpernickel beast. Variously colored goo oozed from between the many layers, and students nearby cringed and gasped at the horrid smell.

The fumes made it to Pandora and Lyle, hitting them like the shock waves of a bomb blast. They grimaced, but this just got Pandora even more interested.

“It’s got to be sardines… and liverwurst…” she surmised. “…and cockroaches… and pond scum…” added Lyle.

“Soon we’ll know for sure.” Pandora turned to Lyle. “I’ll meet you in the chem lab in five.”

Pandora grabbed her lunch bag and got up, heading for Randy’s table. Lyle winced, grabbed his bag and headed for the exit.

Pandora carefully walked up to Randy and gestured to the seat across from him. “Anyone sitting here?”

Pandora put on a brave smile and sat down anyway. “Didn’t think so. Thanks!” She started to eat her own lunch, keeping her eyes down. After a moment, the fuming Randy turned away, deciding to put up with her.

Randy looked back at his sandwich and smiled, finally ready to take a bite. Pandora carefully looked back up at him, then at the wall clock over his head. It was 12:10PM, and Pandora was starting to worry. Randy lifted the sandwich up… his mouth opened wider… wider…

WHAP! The cafeteria door swung open wide. It was Lexy Squires, 12, the resident queen bee of Greenwood Middle School. She was joined by her entourage, Haylee and Kaylee, who did their best to look just like Lexy. The three of them strode across the room, heading for their usual table (complete with its own “Reserved” sign).

Pandora smiled to herself, relieved. “Right on time,” she whispered.

Randy looked up as Lexy passed him. For the first time, his angry glare faded, and his face turned to mush. He put down his uneaten sandwich, smitten. “Hi, Lexy,” he said weakly, his voice cracking.

But Lexy just rolled her eyes, tossed her hair in disdain and moved on to her table.

Meanwhile, this was the distraction that Pandora was looking for. While Randy was fawning over Lexy, Pandora snatched his sandwich! She switched it with a sandwich of equal size from her own lunch bag, then she shoved his sandwich into her bag and stood up.

Randy looked up at Pandora as she scooted for the exit. Then he looked back at the disdainful Lexy. With a bit of sadness, he picked up ‘his’ sandwich again… and finally took a bite.

“AAAAAAGGGGHHH!!!” Randy turned white in horror. He stood up and spit out the mouthful, spraying some nearby students. They didn’t dare complain.

Randy stared at the sandwich. “This isn’t mine!” He glared all around the room, and everybody looked down, not wanting to meet his gaze.

What kept getting Pandora into trouble?
a) she did not follow instructions
b) she was curious about everything
c) she skipped school sometimes

What did Pandora want to know about Randy?
a) If he had a girlfriend
b) if he would help her with her homework
c) what he had in his sandwich

How did Pandora collect the information she wanted?
a) she watched him flirt with Lexy
b) she asked him to help her with homework
c) she switched lunches on him