“Dratted bells!” Peter exclaimed, shaking the brass bells on the toes of his felted boots.  “They give me away every time.  I can’t sneak up on anybody like I used to…”

“They have to go,” he asserted as he flicked his knife to cut the bells off.

And off they came.  Along with the tips of his boots.

“Double rats!!” he shouted, tripping into an unfamiliar bedroom window.  He had been flying outside the two-story house and his mishap with the knife tipped him off-balance. 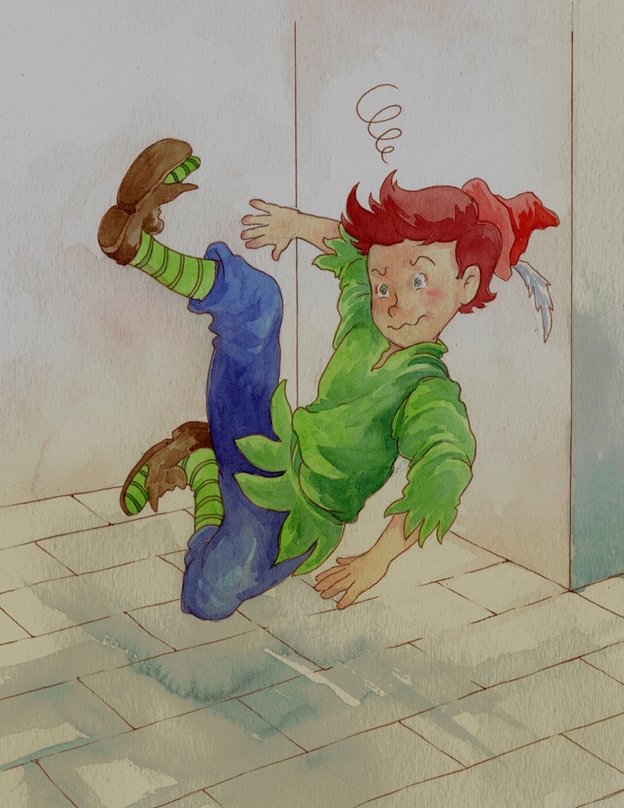 Crash!  Peter landed in an undignified heap on Gwendolyn’s bedroom floor with one leg in the air and the other tangled underneath him.

“Errr…hello?” he managed in quiet voice.  Not his usual style.

“Why, who are you?” said Gwendolyn, astonished with her unexpected visitor.  She had been reading bedtime stories to her younger brothers Mark and Ethan.  They simply sat at her feet, too stunned to utter a word.

“Why, I’m Peter, of course,” he announced as though everyone should already know.  As he stamped his feet, his big toes started to wriggle out of his boots.

“Oh, jiggerdiddles!” he exclaimed.  “Now my boots are ruined because I snipped off those pesky bells.  Nooow what am I going to do?”

“I have an extra pair of sneakers,” little Ethan spoke up, not noticing that Peter was many times his size.  His shoes surely wouldn’t fit.

“I have a pair of socks with ribbing that are somewhat like shoes.  They might stretch enough for you,” suggested Mark.

But Peter would not consider wearing anything as flimsy as socks.  Not with all the risky things that he had to do.  Like keep his home safe from alligators and buccaneers.  Those threats required him to be nimble on his feet.

“Here,” said Gwendolyn, bringing out her sewing kit.  “Let me see what I can do.”  And, in short order, she mended the tips of his felted boots so that his toes were secure once more.  She even added a section of a sock’s toe so that his toes could wriggle freely.

“Thank you very kindly,” gushed Peter as he bowed low for Gwendolyn’s benefit with his scarlet cap tilting dangerously.  “If you don’t mind, I’ll sit here for a moment to catch my breath.  Do you mind reading that story?  I like stories.”  He curled on the floor with Gwendolyn’s brothers, looking as though he belonged with them. 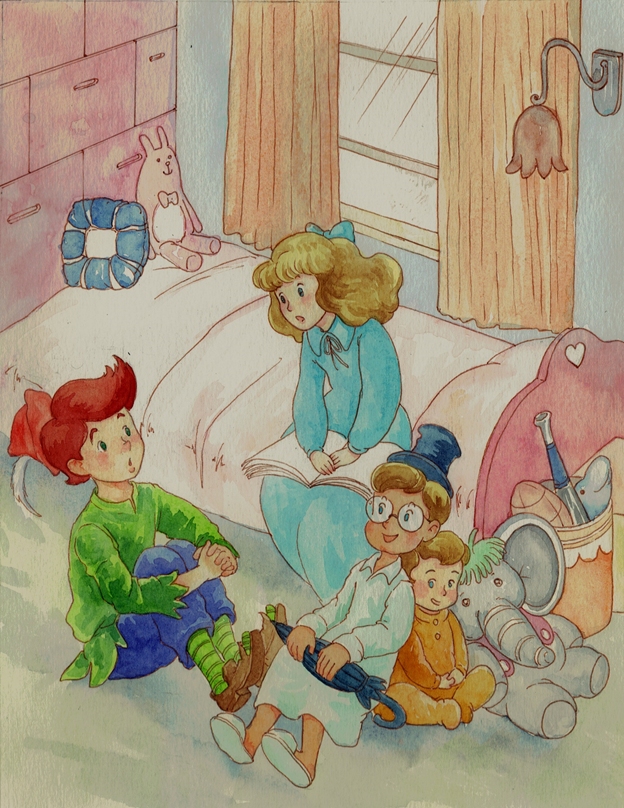 “Of course,” Gwendolyn agreed.  She liked reading to her younger brothers and helping her mother take care of them.  One more, even though Peter was older, would be no bother.

After the story was over, Gwendolyn told Mark and Ethan that it was time for bed.  She was ready to tuck them in when Peter suddenly exclaimed, “What’s this about bedtime?  In my house, there is no bedtime.  We play as long as we like and eat ice cream at midnight.  Wouldn’t you like to come with me and have some fun?”

Peter couldn’t imagine that anyone would turn down an offer like that.

Gwendolyn’s brothers, who had just been ready to sleep, sat up in bed with excitement and cried, “Yes!  Let’s go!  We’re not ready to sleep yet.  We want to have fun!!!”

Gwendolyn, ever the sensible one, pointed out that morning would come very early if they didn’t get their proper sleep.  And that their mother and father would worry if they discovered that they weren’t in their beds.  And that, if they didn’t sleep as much as they needed, they wouldn’t grow bigger and stronger and…older.

“Older?”  hollered Peter as though it were one of those words that you didn’t say in polite company.  “Older?  Why would anyone want to get older?  I’ve stayed the same age for ever so long.  I don’t WANT to get older.  Ever.”  He stamped his foot with his newly repaired felt boots for emphasis.

You see, Peter and Gwendolyn were on opposite sides of the fence on this issue.  Gwendolyn was doing all the things that she thought were necessary and proper to grow into an adult.  She studied hard at school.  She helped her mother at home.  And she took good care of her little brothers because, one day, she really, really wanted to be a mother, too. 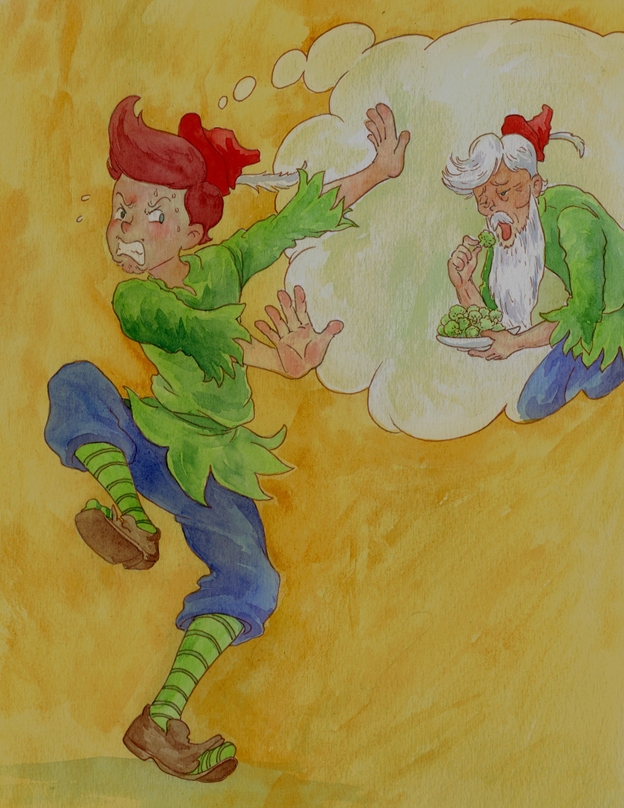 Peter had decided that being an adult meant that there would no longer be any time for fun.  It meant unrelenting drudgery and complicated relationships and eating all of your vegetables when you’d rather have candy and cake.  Even broccoli.  Brrrrr.  He resolved that he would never abandon his adventurous life for a boring adulthood.

Special thanks to Anne Murray for providing us this excerpt from her wonderful book.

Buy this book on Amazon
See other books by Anne Murray