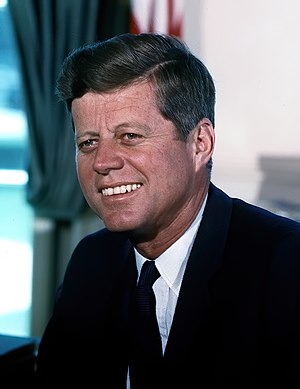 John Fitzgerald Kennedy (May 29, 1917 – November 22, 1963), commonly known as Jack, or by his initials JFK, was the 35th President of the United States. He was in office from 1961, until his assassination in 1963. He was the youngest president elected to the office, at the age of 43. Events during his presidency included the Bay of Pigs Invasion, the Cuban Missile Crisis, the building of the Berlin Wall, the Space Race, the African-American Civil Rights Movement, and the early stages of the Vietnam War. He was the youngest President of the United States to die, while in office.

Kennedy graduated from Harvard University, with a Bachelor in Science. During World War Two, he served in the U.S. Navy. When his PT boat was sunk by a Japanese destroyer in 1943, he seriously injured his back. He still saved his surviving crew, for which he was later rewarded with two medals.

2. He received medals for his heroic action aboard PT 109 during:
a) World War I
b) World War II
c) the Civil War

Kennedy was a member of the United States Democratic Party. He beat his Republican Party opponent, Richard Nixon, in the 1960 presidential election. Kennedy was the youngest president ever elected. He was also the first Roman Catholic president, and the first president to win a Pulitzer Prize. Kennedy was considered by many to be a great speaker, and he inspired a new generation of young Americans.

During the beginning of his term, he approved the CIA’s plan to invade Cuba. After the invasion turned out to be a failure, the Cuban Missile Crisis began. During this crisis, Cuba ordered a number of nuclear missiles from the Soviet Union. It was the closest that the world had ever come to having a nuclear war. Kennedy ordered U.S. Navy ships to surround Cuba. He ended the crisis peacefully, by making an agreement with the Soviet Union. They agreed that the Soviet Union would stop selling nuclear weapons to Cuba. In return, the U.S. would take its missiles out of Turkey, and promise to never invade Cuba again.

He also created a plan called the New Frontier. This was a series of government programs, such as urban renewal, to help poor and working class people. He created the Peace Corps, to help poor countries all over the world. He agreed to a large tax cut, to help the economy. He also called for the Civil Rights Act of 1964, which would make both discrimination, and segregation, illegal. Near the end of his presidency, Kennedy was intending to reach a détente with Cuban Premier, Fidel Castro, and to withdraw all U.S. military advisers from Vietnam.

5. One reason that Kennedy created the New Frontier to:
a) attack Russia
b) help wealthy nations
c) help poor people

Kennedy was assassinated on November 22, 1963, in Dallas, Texas. He was being driven through the city in an open-top car, along with John Connally, the Governor of Texas. As the car drove into Dealey Plaza, shots were fired. Kennedy was hit twice. The first bullet struck him in the upper back, and it exited through his throat. The second bullet struck him in the head. He was taken to Parkland Memorial Hospital, 4 miles (6.4 km) away. At 1:00 p.m., Kennedy was pronounced dead. Lee Harvey Oswald was the prime suspect in the murder, and he was arrested on the same day, for the murder of a policeman named J. D. Tippit. Oswald denied shooting anyone, and he was killed two days later, on November 24, by Jack Ruby.

Three days after his murder, on November 25, Kennedy was given a state funeral near the White House, where his body was laid to rest in Arlington, Virginia.

6. John Kennedy was assassinated in 1963 in:
a) Boston, Massachusetts
b) Washington D.C.
c) Dallas, Texas

After Kennedy died, Lyndon Johnson (his Vice-President) took over and put many of Kennedy’s ideas into law (calling it the “Great Society”).

Kennedy was a very popular president, and he still is today. He is considered one of the best U.S. Presidents, ranking highly in public surveys and opinion polls.