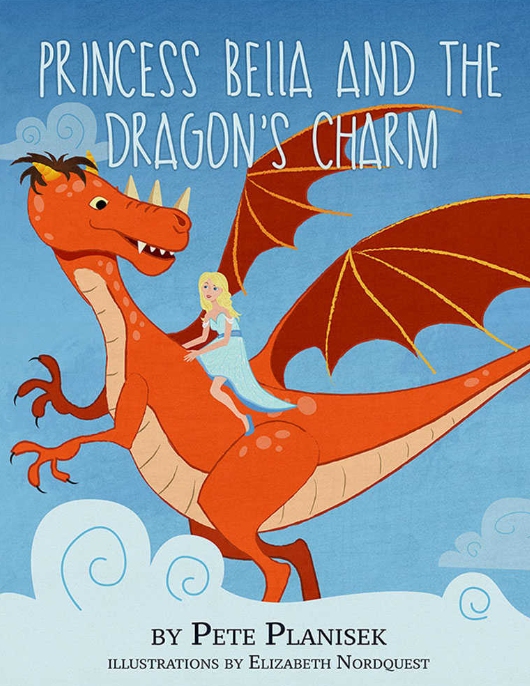 Princess Bella and the Dragon’s Charm
Chapter 1 and 2 Excerpts
by: Pete Planisek 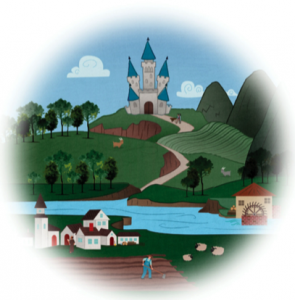 In an age long past, far, far across the misty seas, there once lived a princess. She was so beautiful when she was born that the king and queen decided at once she should forever be known as Princess Bella. They loved her and raised her well, but there was always a cloud over their happiness. The princess’ beauty and generosity were known far and wide across the land. Yet, though she smiled, Princess Bella never ever laughed.

When her parents asked her what was wrong, she always politely answered that nothing was upsetting her. The royal doctor could find no cause for it; although he did suggest that it might be result of the stars she’d been born under. Or perhaps an ogre or a witch could be responsible. But the king and queen did not think these suggestions were very likely. Still her parents tried everything to get her to laugh. They hired a jester to entertain the entire court. He juggled, told jokes, sang silly songs, and performed tricks. He would have all the noble lords and ladies and the king and queen howling in fits of laughter—everyone except the poor princess.

As she grew older, her beauty became more and more stunning. Her hair grew so fine and lightly blonde it almost looked white. It was said that her smile shone more brightly than the sun; her eyes were the inviting color of soft moonlight. Her gowns often favored a pale blue, a color which suited her mood. Princes from kingdoms near and far traveled to Bella’s castle to ask for her hand in marriage. She was never rude or distant to her guests, all of whom tried to get her to laugh, but they were never successful. She always rejected their offers to marry. In time, the heartbroken princes began to call her by a nickname. Instead of calling her Princess Bella they began to call her The Ice Princess.

The name and the legend of the unhappy princess grew and soon only her parents still called her Bella. Everyone else began to call her The Ice Princess. New fantastical stories soon spread. There were rumors that the princess could turn knights into ice, that she could summon snowstorms to hide in, that she controlled powerful magic, and that she could even heal others with her icy tears. To many, she seemed cold and distant, traits which made her very few (if any) friends. To her parents, Bella simply seemed sad.

Bella began to spend long hours alone. Sometimes she walked in the castle gardens or along the stream. Other times she climbed the staircase to the tallest tower and looked out across her parents’ kingdom. She could see the wide ocean in the west, the great forest to the north where mystical creatures and fairies lived, the peaceful villages to the south, and great dark mountains to the east where witches, monsters, and trolls lived. At night the sky above her twinkled with the peaceful light of the moon and stars.

Though she loved her family, Bella longed to visit other far away places. Travel sounded wonderful. Life at the castle was very nice, but the days could get a little boring. Nothing exciting ever seemed to happen. When suitors came to ask for her hand in marriage, she always longed to hear stories about their kingdoms and the lands they’d visited. As they talked, she imagined what it would be like for her to go to these places and to see them for herself, but she knew that the terrible secret she guarded would always prevent her happiness and keep her alone, forever. 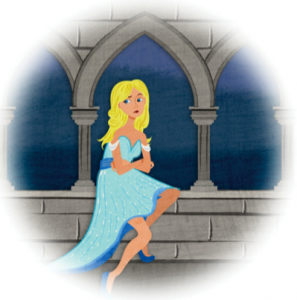 Then one day, Princess Bella had the worst day ever. She woke up and fell out of the wrong side of the bed. There wasn’t any hot water for her bath. The only choice for lunch was icky troll tongue sandwiches with brussels sprouts. When she was walking outside of the castle looking up at birds, she slipped and fell into the moat. The muddy water ruined her favorite book and soaked her clothing. When she went to change, she found out that moths had eaten everything except her fancy ballroom gown. But the evening was still worse.

Dinner was toadstool salad and porcupine meatballs. As she was eating, her parents announced that another young prince was coming to ask her to marry him tomorrow. Bella grew even more sad for she knew she could only break his heart.

When the horrible day was almost over, she went alone to the tall tower. The sun was just setting and the moon was just rising. It was very windy. Princess Bella sighed then closed her eyes for a moment and imagined she was sailing on the ocean. She leaned forward into the wind and pretended she was on the bow of the ship as it rode across the deep blue waves. It was so relaxing that when she first opened her eyes she didn’t notice that she wasn’t standing on the castle tower anymore. In fact, she wasn’t standing on anything at all.

Villages, trees, people, animals, hills, and streams passed quickly by beneath her feet. She was flying. But how could this be? She looked up and screamed as she saw a creature she’d heard about but never seen. It was a huge dragon with red scales and sharp claws. It was carrying her away from the castle and towards the dark mountains in the east.

Princess Bella had been dragonapped!

1. Princess Bella was beautiful and kind, but she never:
a) smiled
b) frowned
c) laughed

2. Because she became even more beautiful as she grew older, princes came from all around to:
a) ask her to marry them
b) see if she was really that pretty
c) see if they could make her cry

3. Because of the way Bella responded to the princes, her nickname became:
a) The Mean Princess
b) The Stuck-up Princess
c) The Ice Princess

4. Bella’s life at the castle was sometimes boring, and she wanted to:
a) read more books
b) travel to far away places
c) learn how to fly an airplane

5. What was the last thing that happened on Princess Bella’s worst day ever?
a) she had to eat spaghetti and meatballs for dinner
b) she had to marry one of the princes
c) she was dragonapped

Special thanks to Pete Planisek for providing us these chapters from his wonderful book.