The following is an excerpt from the Undercover Agent.

Quentin and his friends are on a mission to search the school’s Records Room.  Clive is keeping watch, via the cameras the team placed outside the room, whilst Quentin, Bluey, and Vicky look through the files.

‘Alpha Team, this is Mother Hen, there’s a fox in the coop and he’s coming your way!’

Quentin, Bluey, and Vicky all looked at each other.

They all dove for the same hiding place, under the desk, knocking their heads, elbows, and knees against everything including each other.

‘Ssssshhhhh,’ they all heard in their ears. ‘I can hear that racket from here!’ Clive exclaimed.

They all squeezed in, with Quentin stuck between the two girls.

Heart pounding in his chest Quentin tried to hold his breath, afraid that it would be heard though his thoughts were occupied by the fact he could smell flowers. He tried to focus on the danger in hand but the scent kept tugging his mind away from the danger, calming him, slowing his breathing, quietening his pounding heart. Holding Bluey’s hand, he gave it a comforting squeeze, before placing his other hand on Vicky’s shoulder. Her breathing slowed as she relaxed from his calming touch.

The door suddenly opened, and the room was bathed in light. Quentin saw the desk had a panel in the front that hid them from view and breathed easier.

Just as suddenly the light went out, the door closed and they could hear the key in the lock jiggle then a loud “CLICK” locking them in.

Quentin, Vicky, and Bluey untangled themselves from beneath the desk and stood, grinning at each other in the torch light.

‘Wow, that was close,’ Bluey said breathlessly. ‘What do you say we get out of here?’

‘Alpha Team to Mother Hen, we are coming home to roost,’ said Quentin, which tickled both Vicky and Bluey so much they giggled.

Once they started, they couldn’t stop and soon Quentin was laughing too. They each had their hands over their mouths trying to keep the noise down but as soon as they got themselves under control, one of them would smile, which would set another off giggling and that would send them all into fits of laughter. They could even hear Clive laughing through their earpieces.

Wiping away tears from their eyes, Quentin and Vicky watched whilst Bluey picked the lock. Having done it once, the second time was a doddle, and they were quickly through the door.

The dark and quiet of the night sobered them up, and they got their laughter under control.

Bluey locked the door again, and with stealth, they moved down the hall, remembering to take the camera from the far end first and collecting the other one as they passed on their way back to the Tech Workshop. At the top of the stairs, Clive was waiting and together the four of them, quiet as mice, made their way down the hall.

Bluey opened it in record time and they all breathed a sigh of relief once it closed behind them. Quentin and Clive remained there; ears pressed to the door trying to hear anything on the other side whilst Bluey picked the lock on the cage and together with Vicky, replaced all their equipment before rejoining Quentin and Clive at the door.

In a moment of madness Quentin said, ‘Cluck cluck.’

This set them all off into peals of laughter again. Just trying to stop and keep quiet seemed to fuel their laughter, and they feared they would never stop.

Finally, Clive got cross with them and told them all to be quiet. Quentin saw Vicky roll her eyes, which would have set him and Bluey off, again, but for Clive’s glare and pointing finger.

Under control, they opened the door and peeked out. Seeing the coast was clear, they tiptoed down the hallway to where it met the main corridor.

Cautiously peering around the corner, Clive couldn’t see anyone and headed for the stairs, the others following close behind.

They felt more exposed and vulnerable now they knew guards were prowling about. Down the stairs, they crept and then ran across the main entrance hall and through their door. They made their way to the lobby and through the door into their common room.

Throwing themselves into the comfortable armchairs, they breathed a sigh of relief and discussed the mission. They agreed it had been a success and their next step was to talk to Unwin about Quentin’s parents, specifically his mum, and her name before she got married.  Clive yawned loudly, which; of course, set everyone else off, so agreed it was time for bed. The girls in the lead, they left the common room and up the stairs.

He leant down and pulled a scrap of paper off the bottom of Bluey’s sock.

On it, he could just make out writing.  They crowded round and shone their torches on the paper.

‘It’s a code,’ breathed Quentin excitedly. ‘The intruder must have dropped it.’

‘Can you crack it?’ ask Clive.

‘Not tonight you won’t,’ said Vicky firmly, taking the note. ‘I will give this back to you tomorrow evening, otherwise you will be up all night and knowing you, still going at it during class. The last thing we need is to have it confiscated.’

Quentin was going to argue but one look into her eyes and he softened. Not fair, he thought, who could argue with those eyes.

Quentin nodded, and the girls darted off to their room leaving the boys to climb up to the next level and their own beds. Quentin tried to stay awake and puzzle out the night’s events but as soon as his head hit the pillow, he was asleep. 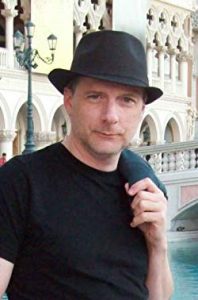 Special thanks to Simon Hartwell for providing us this excerpt from his wonderful book.