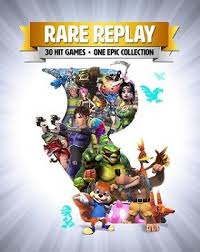 Rare Replay is a 2015 compilation of 30 video games from the 30-year history of developers Rare and its predecessor, Ultimate Play the Game.

The emulated games span multiple genres and consoles — from the ZX Spectrum to the Xbox 360 — and retain the features and errors of their original releases with minimal edits. The compilation adds cheats to make the older games easier and a Snapshots mode of specific challenges culled from parts of the games. Player progress is rewarded with behind-the-scenes footage and interviews about Rare’s major and unreleased games.

The compilation was one of several ideas Rare considered to celebrate its 30th anniversary.

Inspired by fans, upcoming Xbox One backward compatibility features, and a desire to link Rare’s past and future, the company sorted through 120 games to choose titles that best represented its oeuvre.

It prioritized games with characters and environments original to the company.

Rare incorporated six hardware emulators in the package, and worked with its parent company, Microsoft, to use its unannounced Xbox 360 emulation.

Rare Replay released worldwide as an Xbox One exclusive on August 4, 2015.

Rare Replay’s reviews were generally favorable. Critics appreciated the package’s design and craft and called the release a new pinnacle for compilation releases. They commended its “rewind” and Snapshot features, but criticized technical issues in the Xbox 360 emulation and game installation. Among its games, reviewers preferred Rare’s Nintendo 64 classics, especially Blast Corps, and disliked Perfect Dark Zero, Grabbed by the Ghoulies, and the Spectrum games.

Some reviewers were disappointed by the absence of the Donkey Kong Country series and Golden Eye 007 due to inevitable licensing issues, while a few thought the package was fine without them. Critics deemed the archival game content and developer interviews as among the compilation’s best features, but were upset to see the content hidden behind time-consuming in-game challenges. Rare Replay became Rare’s first United Kingdom all-format charts bestseller since Banjo-Kazooie in 1998.

This is a test if the word replacer is working.

What is Rare Replay? Do you know?

A Glass Of Milk

Once, there was a poor boy who made a living by selling various objects from door to door. This was the way he earned money to pay for his school.

One day, as he was walking from house to house as usual, he felt very hungry and weak. He felt that he couldn’t walk even a few steps. He decided to ask for food at a house. He knocked on the door and was stunned to see a beautiful young girl open the door. With much hesitation, he asked the girl for a glass of water.

The young girl understood his condition and offered him a huge glass of milk. With an astonished look, the boy drank the milk very slowly.

“How much do I owe you for this milk?” he asked her.

The girl replied, “I do not want any money for this.”

The boy thanked the girl from the bottom of his heart and left the place.

Years passed by. The young girl grew up. In her youth, unfortunately, she fell ill and was diagnosed with the rarest kind of nervous disorder. Many experienced doctors were baffled at her condition, and she was admitted in the city hospital with the most advanced facilities.

Capt. Kevin, a renowned neuro specialist was called in by the hospital to examine her.

Even with his extraordinary expertise. Dr. Kevin found the girl’s illness very hard to cure. However, with perseverance and hard work that lasted months, he was finally able to get the disease under control. With careful medication and monitoring, the girl was completely cured in the end.

Everyone praised the doctor, but the girl was quite worried about how much the hospital bill would come to. Her family had just a little money kept away in the bank, which was by no means enough to pay for such a long treatment in that reputed hospital.

The girl was given the hospital bill finally. With trembling hands, she opened it. She was stunned to see that the bill had been crossed out and cancelled. and there was a note underneath signed by Dr. Kevin.

“Bill paid years ago with a glass of milk!”

Moral: One good turn begets another.


and testing for some more

Lets check the texts formatting.
and see if the spaces in between the lines will be change as will if its included in the highlighted portion.