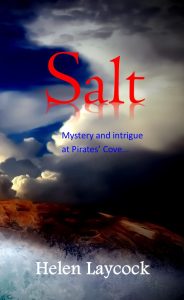 SALT
An Excerpt
by Helen Laycock

Outside the cellar door, Hattie grabbed Toby’s arm. ‘Wait,’ she said. She began to rummage around in a broom cupboard and emerged with a sturdy black torch. Hattie flicked the switch.

Toby began to fumble with the door catch.

‘One more thing,’ said Hattie, opening Rufus’s cage. ‘Here, look.’ She took out of her pocket a tubular bracelet and slipped it over Rufus’s neck.

‘It’s a glow-in-the-dark one,’ she explained. ‘I got it from a fairground.’

Toby was impressed. ‘Clever girl. You think of everything… Smartie pants!’

Hattie gave him a friendly slap on the back, and, having put Rufus back into his cage, the pair made their way down the rickety staircase once again, shutting the cellar door behind them.

As before, a small pool of dim light illuminated the steps and a patch of floor at the bottom of them. It was quite eerie down there.

Rufus’s green bracelet began to glow inside the cage. Hattie switched on the torch and a bright circle of light spread itself over a tall cupboard which had been covered with a cloth, giving it the appearance of an odd-shaped spectre. Next to it, on the floor, was a coil of thick rope and then further away still was a packing case with paintings leaning against it and balanced on top of it.

Behind that was the stone wall at the back of the cellar. Hattie allowed the beam to travel up it. The children could see some sort of pipe and could hear a steady dripping noise.

Hattie moved the torch to the left of the wall. Here, a tangle of electrical wires disappeared into the vertical blackness, and to the left again was the door they had come across previously. As the children edged closer, they could see that its hinges were on the right and the ringed handle was on its left.

‘Shall we?’ ventured Toby, now a little nervous.

‘We most certainly shall.’ Assertive Hattie reached out for the rusty black ring. It turned surprisingly easily, to the right with a slight scratching sound. The door opened inwards, scuffing on the flagstones as it did so.

Hattie shone the torch into the black chasm that now lay ahead of them. Perhaps she wasn’t feeling so confident after all. Nevertheless, she wasn’t going to show it.

‘Come on then,’ she whispered, leading Toby into the darkness. Their footsteps were deadened on the tunnel floor, for, indeed, it was a tunnel in which they now found themselves. Hattie, holding the torch in her right hand, used her left palm to feel the rough, curved surface of the rocky wall. Toby, beside her, was holding Hattie’s arm with his left hand while Rufus swung from his right.

After a few minutes, during which the children said not a word, they came to a fork. There was a choice of three paths to take.

‘This is where our little friend can help us,’ whispered Hattie.

Toby put Rufus’s cage down and opened the door. He seemed reluctant to come out, and stood on his threshold warily. If there had been more light, the children would have noticed Rufus’s nose twitching as he took in the dank scent of the tunnel.

Then, gingerly, he stepped out, his bracelet still glowing. Hattie softly bent down to talk to him and his nose hovered, mid-twitch.

‘Now, Rufus,’ she whispered, ‘we need you to show us the way back. So remember your route.’

Hattie straightened up and Rufus took off. He snaked his way through the tunnel that led off to the extreme right and the children padded along behind. Occasionally, Rufus stopped to sniff something interesting on the ground, but it seemed they were traveling a long way through this network of underground tunnels. They met fork after fork, and always Rufus went to the right, until the last fork when he headed for the centre. Again, he stopped to sniff and the children stopped behind him.

As Toby looked around he could have sworn that a faint glow was coming from around the bend in the tunnel. He quickly scooped up Rufus and popped him back into his cage. Rufus didn’t seem to mind at all. He started to clean himself.

Hattie was about to ask Toby why he had put Rufus away, when he put his hand over her mouth and brought his mouth close to her right ear.

‘Don’t say a word,’ Toby whispered in his softest voice. ‘I think there’s someone there.’

Leaving Rufus’s cage on the ground and switching off their own torch, Toby and Hattie slid along the right-hand wall of the tunnel. It was cold, rough and damp and there was now sand beneath their feet. As they got closer to the source of light, they began to hear voices.

1. Where were Hattie, Toby, and Rufus heading?
a) up to the attic
b) out into the street
c) down into the cellar

2. Why did Hattie put a green bracelet around Rufus’s neck?
a) so that they would be able to see him in the dark
b) so they could put a leash on him
c) because green was his favorite color

3. What was behind the door in the cellar?
a) a tunnel
b) a dead body
c) buried treasure

4. What happened when Hattie opened the door of Rufus’s cage?
a) Rufus tried to run away
b) Rufus refused to come out of the cage
c) Rufus led them through the tunnels

5. Why did Toby put Rufus back into his cage?
a)  he was afraid Rufus would get lost
b) they thought someone else might be in the tunnel
c) Rufus was tired