The Complete Adventures of Shelby F. Squirrel and Friends- Excerpt One

Shelby F. Squirrel was so excited he was quivering all over!  His mother had just told him that he was old enough now to go down to the ground with the rest of the family to hunt for fallen nuts.  He and his twin sister, Darby, were not babies any more!

“But,” his mother had sternly added, “You must never go down to the ground alone!  We always go together.”

The other thing their mother had told them was what the initial “F” stood for.  He and Darby had always wanted to know, but were told that they would find out when they were older.

She had patiently explained, “You know that other squirrels look a lot like us, and behave like us most of the time.  Our tails are shorter and our fur is thicker, but the most important thing to know is what our middle initial stands for.  It is the same for every member in our whole family.”  She paused for a moment and taking a big breath, announced, “Shelby Flying Squirrel and Darby Flying Squirrel are your full and proper names, and in  a few days you will have your first flying lesson!”

“Oh, no!” cried Shelby. “I’ll never be able to do that, I just know it!” and before either of them could stop him he scrambled down the tree and across the grass. 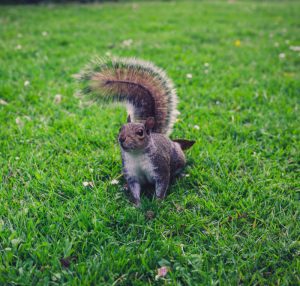 Without looking back, he just ran as fast as he could and soon he was on the edge of the parking lot behind a tall building that seemed to stretch all the way to the sky.  As he glanced around he was startled to see a small black and white dog come trotting toward him.  A low growl came from away down its throat and it suddenly dashed right toward Shelby.

Shelby’s little feet skidded on the pavement as he took off, but he skittered toward the door that someone had just come through and darted inside before he even realized what he was doing.

He was in a small room with no way out!  There were two shopping carts in the corner and a closed door on each side wall.  Straight in front of him was another different looking door.  He was in a complete panic, eyes popping, chest heaving, when the different looking door slid open sideways!  And then another door slid open just a little bit in front of that!

In a shot he was through them both, and went sliding across a beautiful room with soft furniture, carpets, and potted plants.  He sat back on his haunches to take it all in, his head turning in all directions. There were big windows that gave a view of greenery and flowers.  Shelby thought it was the most wonderful sight he had ever seen!  He decided to do a little exploring and began tiptoeing about.  He had only gone a few inches when a man appeared from the hallway that ran off to the left side of the room.  The man had a lot of keys that jangled.  The sound made Shelby nervous, so he sat up to see what would happen.

That’s when the man saw him and, letting out a huge yell, leaped toward him.  Shelby didn’t know what to do!  He was trapped for sure!  And then an amazing thing happened.  The wall near him started to slide open!  In a twinkling he tore through the opening.  He banged into a wall inside and felt quite dazed.  As his head cleared, he realized the whole little room he was in was moving!  A few moments later, the motion stopped and the door rolled back.

Out like a blue streak went Shelby!  It was the right thing to do because, just as he escaped, two little elderly ladies stepped into the elevator.  That was a stroke of luck, for sure.  Neither of them noticed him, and the door closed leaving Shelby in an empty space with two hallways running off in opposite directions.  Now a second panic attack gripped him. He saw no way out. Not a scrap of daylight peeped through anywhere.  Shelby dearly wished he hadn’t run away from his mother and sister like that.  What a dumb thing to do!  He curled up in a corner and started to cry softly to himself.  After all he was not much more than a baby, really.

Oh, no!  The sound of footsteps snapped him out of his gloomy mood.  He peeked around the corner and saw that a door had opened a few feet away.  A man had already come toward the elevator and was waiting for someone else to join him.  Shelby raced past the man, and dashed through the door just as a lady came through, and it swung shut.  He felt a lot safer in here.  At least there was daylight! He nearly lost it entirely when a big furry cat leaped at him from the chesterfield, missing him by a whisker.  He went instinctively toward the window, which was also a door!  Through  that door, gasping for breath, scuttled Shelby.  He circled around in a pretty tight space before jumping up to get away from the cat.  He found himself on a ledge looking down at the top of a large tree!

That’s when something magic happened.  He didn’t even have to think about what he was doing.  He just threw himself off the ledge and in the direction of the tree.  His little legs stretched out as wide as they could, and on each side of his body the loose skin miraculously became a parachute.  But more than that, it was a parachute that he could steer!  By tilting his tail a little he controlled his flight and landed perfectly on a branch that gave gently with his weight and swayed for a moment while he caught his breath.

Shelby F. Squirrel was down that tree, across the grass and back up his own tree so fast that he almost became a blur.  His mother and Darby were waiting with frightened looks on their faces.

Taking huge hiccupping breaths, Shelby stammered, “Oh, Mother! Oh, Darby!  I can fly!I can fly!  I did it!  And I promise to listen to you from now on!  No more running away for me!”

1. When Shelby ran away did you think he was:
a) naughty?
b) frightened?
c) over-reacting?
d) wrong?

2. When Shelby floated down to the tree to escape from the cat was it:
a) instinct?
b) risky?
c) a miracle?
d) crazy?

3. Who was the man with the keys who shouted at Shelby?
a) Policeman
c) Janitor or Security
d) Fireman

2. What really happens when a flying squirrel flies?

3. Why did Mother say that they must always be together if they go down to the ground?

4. Did you realize what was happening when the wall moved?

5. Shelby started to cry. Did you feel sorry for him?

6. What did this story teach you?