SHELBY IN THE DARK:

Shelby F. Squirrel and his twin sister, Darby, were just waking up from an afternoon nap.  As they slowly stirred and opened their eyes, they realized their Mother was quietly sitting watching them.  From the look on her face they both knew she had something important on her mind.  It seemed every other day that a new lesson awaited them, now that they were old enough to learn the ways of all flying squirrels.

“Well, you two slept quite a while!”  said their Mother eventually.  “Are you both wide awake now?”

Shelby and Darby sat up straight and tried to look attentive, the way good children should look.  What they really wanted to do was go and play tag in the treetops.  It was their favorite game now that they were such good fliers.

“It’s time, children, for you to take the next step toward becoming adult flying squirrels!”  said Mother with a note of pride in her voice.  After all, they had done very well so far, even though they were both still quite young.

“It’s a good thing you had such a long nap, because tonight we start flying in the dark, like true flying squirrels.  We are much more comfortable at night, because…….”

“Oh, no!!!” wailed Shelby in a piteous tone, interrupting her very rudely.  “I know I can’t do that!  No, I just can’t do that!!  I….I…..Mother, Darby, I’m afraid of the dark!”  he hiccupped and started to cry.  He was so ashamed!  He had never told anyone before!  But there it was now, totally out in the open.

Darby humphed and said, “You can do it!  Mother knows what is best for us, so just stop your whining and decide to be brave!”  Darby was much too wise for her age, and so calm in the face of all these scary things.  Shelby admired his sister a lot, so he took a deep breath and turned toward their Mother to listen.

“When the sun sets, we will begin,”  she said sternly, and that was that.

Shelby was getting more and more nervous as the rest of the afternoon wore on, and seeming much too soon, there was his Mother signaling him and Darby to come with her.  She motioned them both to come out of the old woodpecker hole that was their home.

Shelby held his breath and did what he was told. He looked around him and discovered he could see amazingly clearly.  He glanced at his mother and saw the humor in her eyes.  “Have you never wondered why our eyes are so large?”  she queried.  “The other squirrels don’t have such big eyes.”

“Oh,” squealed Darby with delight.  “I always wondered why! Now I finally know!  That’s so awesome!”

There was a full moon shining down as they climbed up their nest tree to begin to fly.  As they went higher and higher Mother kept a close watch on both of her twins.  Shelby was trembling all over, but now it was from wonder at the beautiful scene before him as well as from fear.

Then suddenly they were alone.  And there was Mother sailing downward in a graceful arc toward a nearby pine tree.  Darby gave Shelby a shove and he lost his footing and was floating, floating through a misty, unreal world.  His natural instincts took over immediately and he landed quite expertly close to his mother.  In about two seconds Darby was beside them.  All three of them began to look for small pine cones to nibble and soon the quiet night separated them. 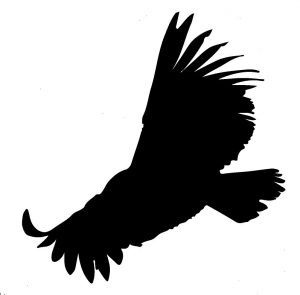 Then, “Whooo-oo-ooooo!” came a ghostly whisper from just over their heads.  Shelby nearly jumped out of his skin.  “WHOO-OO-OOO!!” much louder and longer came the sound.

Darby pressed tightly up against Shelby’s shoulder.  They huddled together the way they had when they were babies.  Then in a flash, they took off running along the branch toward where their mother was, feet scrabbling on the rough bark.

“Who-ooooo!”  startled Shelby so much that he lost his grip completely and was falling, spinning toward the ground.  Then suddenly he was flying instead and firmly attached to a new branch, staring into the brightest, sternest pair of eyes he had ever seen. 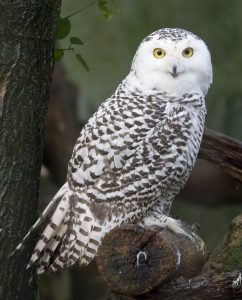 The eyes looked so steadily at him he was mesmerized by them.  Then they were gone; then just as abruptly they were there again!

“Goodness gracious!  Haven’t you ever seen an owl before?”  the creature asked.

“N-n-no, this is my first night out in the woods with my family!”  squeaked Shelby, trying not to hiccup.  He stressed the word family so the owl would know he wasn’t alone.   “H-h-how did you do that with your eyes?”  he couldn’t help asking, even though he knew it wasn’t polite.

“I’ll show you!”  and the owl turned his head so far to the left that Shelby was seeing the back of his head, then a split-second of the straight-ahead stare, then the face shot around to the right, giving Shelby another view of the back of his head!

“Oh my, that is so amazing!  Your head looks like it could unscrew!!”

“I think it is pretty wonderful myself, and I still remember my mother explaining why I could do that!” said the owl.  The look in his eyes was much more kindly now, and nowhere near so staring.

Shelby was beginning to feel a little foolish.  Then the owl spoke up again, “I decided to give you a little lesson, and I hope it has helped you to realize that you are perfectly designed for night flying.  I am truly sorry if I frightened you, but did you notice how you flew without a problem in the world when you weren’t thinking about it?  You can see and you can fly at night!  And you are much more ready to be an adult flying squirrel than you give yourself credit for!!  They don’t call me the Wise Old Owl for nothing, you know!”  And with a great whoosh of his huge wings, he was gone.

Shelby could see Darby and Mother nearby, and he felt so much better!  This was going to be just fine after all!

What do you think the big WHOooo sound was?
a) A siren.
b) A train whistle.
c) An owl.

What do Flying Squirrels have that helps them at night?
a) Courage.
b) Eyes for night vision.
c) Excellent hearing.

Do you think that children are often afraid of the dark?

Have you ever been afraid of something new and then found it was fun instead?

What did you learn from this story?