Shelby F. Squirrel woke up from a really long afternoon nap.  He had been snuggled up against his sister Darby on one side and his mother on the other side, so he was all cozy and warm.  The days had become much colder lately and when it was time to sleep, the three of them had to curl up in one big furry mound to keep from shivering. Darby and Mother showed no sign of waking up so Shelby stretched and yawned and decided to go outside for a bit of air.

He noticed that there was a hush that he wasn’t used to!  And the opening of the woodpecker hole seemed almost to glow.  Shelby moved slowly and tried not to disturb the sleepy-heads as he detached himself from the tangle of legs and tails.  When he was sure they were still sound asleep he went straight for the opening and looked out.

What a shock poor little Shelby had then!  He rubbed his eyes and looked again.  He thought he had lost his ability to see.  Those wonderful big huge eyes failed him for the first time!

“I can see everything here inside our nest!!  It’s just when I look through the hole to the outside that all of a sudden I can’t see!” Shelby breathed to himself. And with that he started to look more carefully into the strange solid whiteness before him.

Slowly, very slowly, shapes started to form and he knew they were the trees that he was used to.  But they were all covered in a thick layer of white!  A hazy sun was lighting up the scene.  Shelby couldn’t see the ground at all!

“Oh, boy,” said  Shelby, “I want to find out what that stuff is!”  And gingerly he stepped out onto the big flat branch in front of the nest hole.

“Brrr!” he took in his breath sharply at the coldness that wrapped itself around his legs.  He quickly looked down and he couldn’t see his feet!!

He was standing in a soft layer of fluffy white material that was FREEZING COLD!!  When he got more used to the coldness, he took a few steps along the branch.

Shelby gradually was getting used to the almost completely white world facing him.  He decided to go up higher in the tree, realizing he had better go quite slowly, which was very difficult for a young, healthy flying squirrel like himself.

Up, up he went, slipping here and there but managing to continue upward without any major catastrophes.

Soon he was up to the level he usually would fly from to get to the next tree.  He sat there and began to think.  He knew there was a pine tree with lovely swaying branches, so he carefully checked until he was sure he recognized the shape.  Yes, he could see shadows under the limbs.   Maybe it would be a good idea to go higher, though, to give himself more distance to steer on the way down and over.

So up he went to get a better take-off position.  Every branch was covered in white and under the soft fluffy stuff, the branches were glass smooth and even colder!  At last, Shelby decided to fly down to the pine tree.  He pushed off in his usual way, but he felt his feet slip as he let go.

“Oh, no!!” wailed Shelby as he spun out of control.  Desperately he clutched at a branch as it loomed near.  He got a grip, but immediately started to slide along and was soon mid-air again, spinning downward, out of control.

Then with a great WHOOSH, he stopped falling and found himself in a heap by the trunk of the pine tree.  As he sat up to take in a breath, it suddenly became darker and with a loud THUMP, clumps of this terrible white stuff fell on top of him and kept falling until only his head was sticking out!

It seemed that his voice didn’t leave his mouth!  Everything was so heavy and hushed that the sound became muffled and he thought, “Oh, no!  They can’t even hear me!”  And he started to cry and hiccup all at the same time.  He was a very sad little flying squirrel who wished with all his heart that he had stayed in that warm nest hole.

“Well, well, what have we here?”  said a voice sharply in his ear.

Shelby stopped crying and hiccupping in the middle of a gulp and stared into the face of a new creature.  It was all white and had dark eyes and the most amazing long ears that flopped all about. 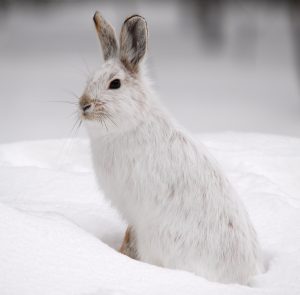 Now it was hopping madly in a circle and loudly proclaiming, “Here we go again!!  Another kid out in the snow without permission!  Now stop your whining and listen up!  This is called snow.  SNOW!  Got it?  It’s the same as rain except in winter it is called snow!”

With that this strange giant-eared animal shook out a huge back foot and began to dig Shelby out!  He turned his back on Shelby and dug and dug and sent up great plumes of snow until Shelby was free again.

Shelby started to hiccup again as he tried to say thank you.

“Now, never mind, I’m just being a good neighbour!  I move into this forest every winter and now here I find you half buried.  But now you’re okay and you need to go home and learn how to manage in this weather! Tell your mother the Snowshoe Rabbit rescued  you!”  And off he hopped into the whiteness of the woods.

Up Shelby climbed back into the safety of home.  Mother hugged him for a long time and said,  “Oh, Shelby, Shelby, come and get dry and I will tell you and Darby all about what happens in winter in the forest!”

Why couldn’t Shelby see?
a) It was dark.
b) It was too bright.
c) It had snowed.

When does the Snowshoe Rabbit move into the forest?
a) In the Spring.
b) In the Winter.
c) In the Fall.

Did you picture the woods covered with perfect new snow?

Why could Shelby not hang on to the branches in the evergreen tree?

Have you ever noticed how quiet it is when everything is covered in snow?

Did you like the Snowshoe Rabbit, or did you think he was a little bit rude?