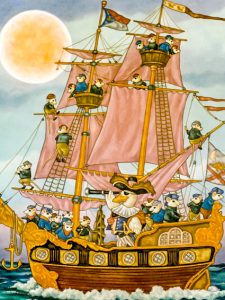 I saw a ship, a’ sailing, a’ sailing on the sea; and oh! It was all laden, with pretty things for thee!

The captain was a duck, with a packet on his back; and when the ship began to move, the captain said, “Quack! Quack!”

a) meat and potatoes

b) bread and honey

2. Who were the sailors?

3. What was the captain?