featuring characters from The Boy Who Cried Ghost,

Nine-year-old Peter Dunlap and Glen Farkason greedily admired their half-full bags of candy as they rushed down the front steps of a neighbor’s house on Halloween night. “A few more houses, and I’ll have a hundred candies!” Glen said, popping a piece of candy into his mouth.

“Not at the rate you’re eating them,” Peter remarked. He hadn’t touched his own candy. He wanted to save it all for later so he could dump his bag onto his bedroom floor and separate everything into categories – hard candy, soft candy, chocolate bars, lollipops, twizzlers, chips and soda. (Healthy treats like apples didn’t count.)

Glancing at the fun Halloween props in the front yard, from fake cobwebs to styrofoam gravestones, Glen rolled his eyes. “This stuff is so stupid. It’s not scary at all.” Suddenly, a creepy mechanical witch cackled, the wart on its nose glowing red. Glen jumped and screamed, almost tripping over the cardboard blocks of his home-made Minecraft costume. Collecting himself, he said to Peter, “That didn’t scare you ’cause you live in a real live haunted house.”

Peter smiled a bit. “That didn’t scare me ’cause it wasn’t scary.” As much as he loved his Chiller Comix horror comic books, Peter wasn’t into trick-or-treating like Glen. In fact, he’d thrown together his own costume at the last minute from pieces of old costumes he’d found at the back of his closet: a cape, a pirate’s eye patch, a cowboy hat and a pair of clown shoes.

The boys arrived at the next house on the block. There were no decorations at all at the front of this house, and the place was totally dark. “Looks like no one’s home,” said Peter, and he started to walk on.

But Glen stopped him. “No, wait. I think I see something on the porch,” he said, and he started up the walkway. Peter reluctantly followed, and the two boys climbed the steps to the dark porch. “What’s that?” Glen asked, noticing something on a patio chair. It was a simple plastic bowl full of Halloween candy. Glen’s eyes lit up. “Hey, we can pick our own candy!” he said as he reached down for a handful. “We can take as much as we want!”

“Wait,” Peter said, pointing to a little sign propped up behind the bowl. “It says ‘TAKE ONE ONLY’.”

“Come on,” Peter said, “they want to make sure everybody gets some.” He took one piece of candy and plopped it into his candy bag.

Feeling guilty, Glen reconsidered and took only one piece as well. “I guess it’s more fair that way,” he said, not too convincingly.

But as Peter turned to go, Glen quickly reached back and snatched another piece of candy from the bowl. Proud of himself, he turned to rejoin Peter, but then – WHOOSH! – a trap door opened beneath the boys’ feet, and they dropped down out of sight!

“AAAAHHH!!!” the boys screamed as they slid down a dark chute. Finally – WHUMP! – they tumbled out the other end onto a cold concrete floor. “OOF!”

Peter turned slowly to Glen. “Did you take another piece of candy?”

“No!” Glen insisted. “I would never do that!” But Peter kept looking at him. Finally, Glen broke down. “Okay, one more piece. Just one!”

Peter shook his head, and the terrified boys looked around. The room appeared to be the house’s dusty, dank basement, complete with piles of junk covered with cobwebs – real ones.

“Where are we?” Glen asked with a whimper.

“Hope it’s not like your basement, with the Gate to Oblivion in the wall with the glowing and the moaning and the…” Suddenly, Glen noticed his Halloween candy scattered all over the floor. “My candy!” he cried as he realized his bag had dumped out half its contents.

As Glen frantically tried to put all his candy back into the bag, Peter left his own bag on the floor as he got up to look around the room more closely. “There’s gotta be stairs leading up or something,” he said. But he could find nothing. Then he looked up at the hole in the ceiling that they’d fallen through, but it was much too high to reach. “There’s no way out of here!” he exclaimed in shock.

Then, from the darkness, an eerie, silky voice: “No, not alone.”

“Who… or what?” the voice replied with a wicked little chuckle.

“But what kind of ‘what’ is it?” Peter asked, just as terrified.

Then the boys heard something odd, a sort of wispy, weaving sound and the delicate clatter of what sounded like knitting needles. What could that possibly be? Peter and Glen had to find out. They crept around the corner of some stacked boxes, following the odd noises. But it was so dark in the basement, they could barely see a thing. Then Peter spotted a dusty bare light bulb hanging from the ceiling. He reached up to its dangling chain and turned it on. 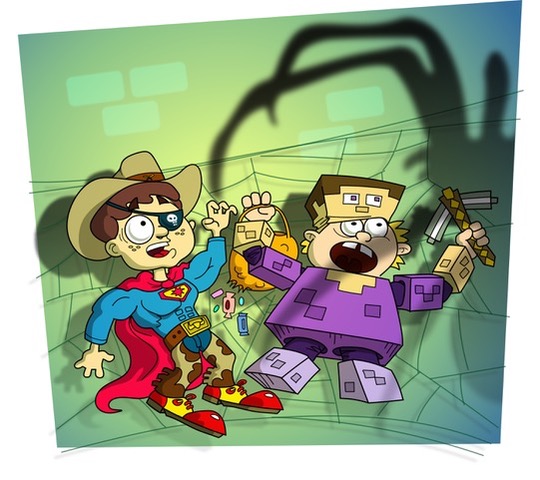 There, right in front of the boys, stood the biggest, ugliest spider they’d ever seen! It was just finishing weaving its massive web, and it looked at the boys with a wide, creepy smile. “Oh, look at you two,” it hissed. “I just love your costumes!”

The boys screamed and took off in the other direction. They ran through the maze of junk scattered around the basement, but they didn’t know where they were going since there were no stairs or windows to escape through. And Peter’s floppy clown shoes weren’t making it very easy for him to run. “Why did I have to wear these stupid things!” he cried.

Everywhere the boys ran, they heard the spider’s demonic laughter echoing all around them. “Boys…” the spider cackled, “do you want a treat… or a trick?”

Suddenly, Peter and Glen ran straight into the spider’s web. They were stuck! “I can’t get out of here!” Glen cried as he struggled in vain to pull himself free. Peter pulled at the web too, but he was just as trapped.

“Why did you have to take that second piece of candy?” Peter pleaded to Glen.

The spider appeared from out of the shadows. “I’m afraid it’s too late for that,” it said with a silky giggle. “Kids with sticky fingers get caught in sticky messes.” It moved in on the boys, its fangs dripping as it salivated, eager to dig into its own Halloween treats.

Peter had to think fast. “Give me your candy!” he demanded of Glen who was still holding his trick-or-treat bag.

“Get your own!” Glen protested.

“Glen, I’m serious!” The boys managed to pull their arms free, and Glen reluctantly held up his bag of candy. Peter took off his pirate’s eye patch and loaded it with a piece of candy like a slingshot. He pulled it back as far as he could, and he shot the candy right at the spider.

SMACK! The hard candy hit the spider right in one of its eight eyes. It screamed in pain… but now it was mad and hungry. It continued towards the boys.

Peter had to think of something new. So he kicked up his feet and thumped the spider’s face with his clown shoes – THUMP, THUMP, THUMP! This too slowed the spider down… but it still kept coming.

Peter and Glen gulped hard. Was this to be the end of them, gobbled up like so much Halloween candy?

Finally, Peter looked up at the hole in the ceiling and got another idea. “Glen, bounce up and down on the web!” Peter started, and Glen joined in. Soon, they were bouncing the web like a trampoline – but they were still stuck.

The spider swiped at them, but it missed every time. “Stay still!” it hissed.

But the boys kept bouncing. And, finally, on their biggest bounce, they broke free of the sticky web and were flung right into the hole. The power of their bounce was so great that it shot them up the chute and to the porch above!

The boys flew out of the trap door and landed hard on the porch. They looked at each other, amazed that they were still alive. “We made it!” cheered Peter.

But then Glen looked around in desperation. “My candy! I left all my candy down there!” He turned to the bowl of treats still sitting on the patio chair. “I’m taking that whole bowl to make up for my lost candy!” He reached with both hands to grab as much candy as he could.

“Glen, no!” Peter screamed, tugging at Glen’s costume to hold him back. “Do you want to end up back in the spider’s web?!”

Glen stopped himself. He folded his arms, frustrated. “Okay, fine. But we’re going to do the whole neighborhood again!” He stomped off, and Peter wiped his brow with relief. Phew! He followed Glen happily.

But as Peter walked off, he could swear he heard a sinister hiss coming from deep beneath the house… 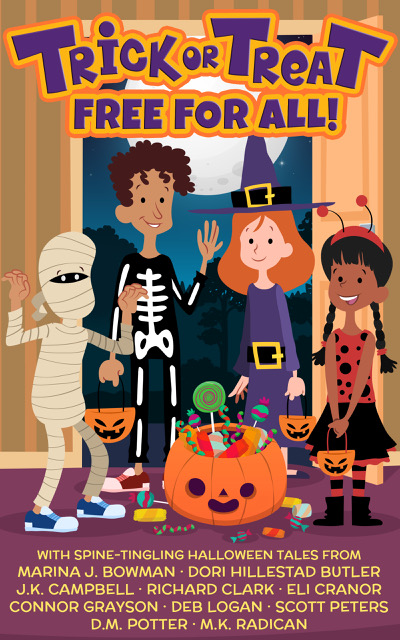 Sticky Fingers is available as a chapter in the book Trick or Treat Free for All.  https://books2read.com/halloweenkidsbook

Read more about Peter and Glen in The Boy Who Cried Ghost. Find it and other fun chapter book series at mybestfriendsecretagent.com. And follow author Richard Clark on Facebook at facebook.com/RichardClarkAuthor and YouTube at youtube.com/user/rclarkbtd/videos.

Richard Clark has written twelve middle grade and chapter books, one of which, My Best Friend Is a Secret Agent, was published in Canada in the summer of 2019. It will be published in the US and worldwide in the fall of 2021, and its sequel will be published in the spring of 2022. Richard has also worked extensively as a screenwriter and story editor, with over 150 produced TV scripts for shows broadcast on the Disney Channel, Nickelodeon, BBC, Netflix, CBC, CTV and many other networks around the world.