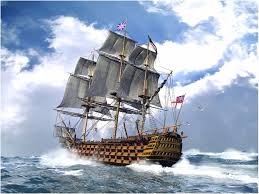 Chapter 1: Out to Sea, continued

For her sake, he would have refused the appointment, but she insisted that he accept the offer, and take her with him. There were mothers, brothers, sisters, aunts, and cousins who vehemently expressed various opinions on the subject. But history will remain silent about exactly what advice was given.

We know only that on a bright May morning in 1888, John, Lord Greystoke, and Lady Alice, sailed from Dover, on their way to Africa. A month later, they arrived at Freetown, where they chartered a small sailing vessel, the Faulkner, which was to take them to their final destination. And from here John, Lord Greystoke, and Lady Alice, his wife, vanished from the face of the Earth.

Two months after they weighed anchor and departed from the port of Freetown, a half dozen British warships were scouring the south Atlantic for some trace of them or their little vessel. And it was almost immediately that the wreckage was found on the shores of St. Helena. This convinced the world that the Faulkner had gone down with all on board. Therefore, the search was halted just barely after it had begun, although hope still lingered, in longing hearts, for many years to come.

The Faulkner, a three-masted ship of about one hundred tons, was the type of vessel often seen in coastal trade in the far southern Atlantic. Their crews were usually composed of the outcasts of the sea: unhanged murderers, and cutthroats of every race and nation. 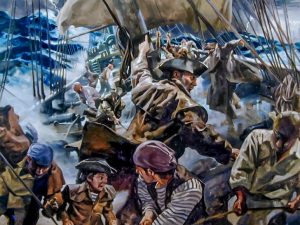 The Faulkner was no exception to the rule. Her Officers were roughened bullies, cruel to their shipmates, and thus hated by their crew. The Captain, while a competent seaman, was a brute in his treatment of his men. He dealt with them in only one of two ways, either a belaying pin or a revolver. In reality, it’s unlikely that his motley crew would have understood much else, anyway.

So, as soon as the second day out from Freetown, John Clayton and his young wife witnessed scenes on the deck of the Faulkner that they had only, up to now, imagined from reading fictional adventure stories of the swashbuckling high seas. It was on the second morning that the first link was forged, in what was destined to generate a very unfortunate chain of events. Never in history had anyone faced a more horrifying life-ending experience .

Two sailors were washing down the decks of the Faulkner. The First Mate was on duty, and the Captain had stopped to speak with John Clayton and Lady Alice. The two men were working backwards toward the little party, who were facing away from the sailors. Closer and closer they came, until one of them was directly behind the Captain. If that sailor had just harmlessly passed by the Captain, this unfortunate tale may have had an entirely different outcome.

But just that instant, the Officer turned to leave Lord and Lady Greystoke. As he did so, he tripped against the sailor and sprawled headlong on the deck. He accidentally overturned the sailor’s water pail, thus drenching himself with its filthy contents. For a few seconds, the scene was almost humorous, but only for a brief moment. Raging mad, and cursing at the top of his lungs, the Captain’s face turned bright red. He regained his feet, and with a terrific blow, he cruelly knocked the sailor to the deck. 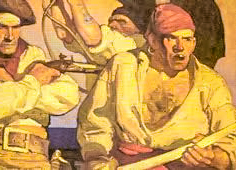 The man was small and rather old, so the Captain’s brutality in this scene made matters seem even worse. The other seaman, however, was neither old nor small. Nicknamed Black Michael, he was a huge bear of a man, with a fierce black mustache, and a great bull neck rising from his massive shoulders. As soon as he saw his shipmate go down, he crouched down low. Then with a deep snarl, he leapt towards the Captain, crushing him to his knees with a single mighty blow.

The Officer’s face turned from scarlet to white, as he realized that this was a blatant act of mutiny. He had witnessed mutiny more than once in his brutal career, and he knew quite well how to deal effectively with it. Without even uprighting himself, he whipped a revolver out of his pocket, and he fired point blank at the great mountain of muscle who towered above him. But as reflexively as he had aimed his gun, John Clayton reacted just as quickly. Lord Greystoke struck down the Captain’s arm the second that he saw the weapon flash in the sun. And although the gun was initially aimed at Black Michael’s heart, the bullet, instead, lodged itself in the sailor’s leg. 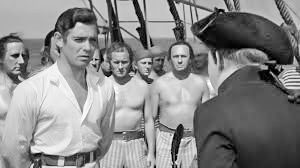 The Captain and Clayton started shouting at each other, with Greystoke making it very clear that he was disgusted with the Captain’s brutal behavior towards his crew. He warned the Captain that while he and Lady Greystoke remained passengers, this kind of behavior was unacceptable. The Captain was about to argue back, but he thought the better of it. He turned on his heel, and black and scowling, he walked away from Clayton. He decided that he’d better not antagonize an English official. He knew that the Queen’s far-reaching, mighty navy was potentially a powerful, punitive threat to his own command.

3. The captain and crew of the ship Faulkner were:
a) professional and experienced sailors
b) acted like (and probably were) criminals
c) were very polite to Clayton and his wife.


4. The captain and Lord Greystoke (John Clayton) argued when:
a) Greystoke had not let the captain kill one of the crew
b) dinner was served late
c) the ship went off course.