Chapter 1: Out to Sea, continued

“Have it as you will then, Alice,” he answered, smiling. “Maybe we’re borrowing trouble. While I don’t like the looks of things on board this ship, they may not be so bad, after all. Maybe our old sailor-friend, the ‘Ancient Mariner’, was just spouting off thoughts from his wicked old heart, rather than speaking the truth. Mutiny on the high seas may have been common a hundred years ago, but in this modern year of 1888, it’s pretty unlikely to occur.”

“Ahh, there goes the Captain to his cabin. I dread talking with the man, but if I’m going to warn him, I might as well get the beastly job over with, right now.” Having said that, he strolled carelessly in the direction of the passage that the Captain had walked through, and a moment later, he was knocking at his door.

“Come in,” the surly Officer growled deeply. And when Clayton had entered, and had closed the door behind him, “Well?”

“I’ve come to report the gist of a conversation I heard today, because I feel that, although there may be nothing to it, it’s important that you’re aware of it. In short, your crewmen are possibly up to no good, and they may be contemplating mutiny and murder.”

“It’s a lie!” roared the Captain. “And if you’ve been interfering again with the discipline of this ship, or meddling in affairs that don’t concern you, then you can take the consequences, and be damned. I don’t care whether you’re a typical fancy English Lord or not. I’m Captain of this here ship, and from now on, you keep your meddling nose out of my business. I won’t put up with it!” 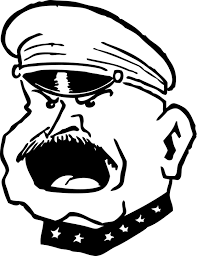 The Captain had worked himself up to such a frenzy of rage that he had turned purple, and he shrieked his last words at the top of his voice, emphasizing his remarks by thumping loudly on the table with one huge fist, and shaking the other in Clayton’s face. Greystoke never blinked an eye, and he calmly stood there, eying the excited man patiently. “Captain Billings,” he drawled finally, “if you will pardon my directness, I might suggest that you are something of an ass.” Then he quietly turned and left the Captain, with the same indifferent expression that he usually wore, which was more likely to anger someone like Billings than throwing torrents of insults at him.

So, where the Captain might easily have regretted his hasty speech if Clayton had attempted to reconcile their differences, Billings’ temper was now irrevocably mired at its angriest peak, and the last chance of their working together for their common good was gone. “Well, Alice,” said Clayton, as he rejoined his wife, “I should have saved my breath. The Captain proved most ungrateful. He pretty much jumped at me like a mad dog. He and his blasted old ship may hang, for all that I care. And until we are safely off of the Faulkner, I’ll focus my energies on looking out for our own good. And I think that my very first step should be to go to our cabin and check on my revolvers. I’m sorry now that we packed the larger guns, and the ammunition, with the stuff below.” 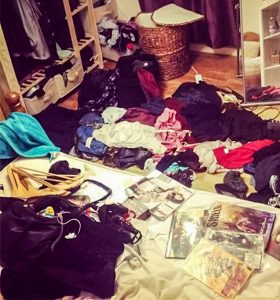 They found their quarters to be in a state of absolute chaos. Clothing from their open boxes and bags was strewn about the little apartment, and even their beds had been torn to pieces. “Evidently someone was more anxious about our belongings than we were,” said Clayton. “Let’s have a look around, Alice, and see what’s missing.” A thorough search revealed that nothing had been taken but Clayton’s two revolvers, and the small supply of ammunition that he had saved for them. “Those are the very things I wish the most that they had left us,” said Clayton. “And the fact that they wanted just the guns, and nothing else, is most disturbing to me.”

“What are we going to do, John?” asked his wife. “Perhaps you were right, thinking that our best chance lies in staying neutral and not choosing sides. If the Officers are able to prevent a mutiny, then we have nothing to fear. But if the mutineers are successful, our one slim hope lies in not having tried to stop them, or not having fought against them.”

As they started to straighten up their cabin, Clayton and his wife simultaneously noticed the corner of a piece of paper sticking out from under the door of their quarters. As Clayton stooped to reach for it, he was amazed to see it move further into the room. He then realized that it was being pushed in by someone on the other side of the door. Quickly and quietly, he stepped toward the door, but as he reached for the knob to open it, his wife’s hand grabbed his wrist.

“No, John,” she whispered. “They don’t want to be seen, and so we can’t afford to see them. Don’t forget that we have chosen the middle ground.” Clayton smiled and dropped his hand to his side. So they both stood there patiently, watching the little piece of white paper until it was finally all the way inside the door. Then Clayton knelt and picked it up. It was a bit of grimy white paper, roughly folded into a ragged square. After he opened it, they found a crude message, printed almost illegibly, obviously written by someone who was not very skilled at writing.

The best that they could translate the scribbling, it was a warning to the Claytons to refrain from reporting the missing revolvers, or from repeating what the old sailor had told them. And if they were to foolishly let go of these secrets, they would be killed. “I rather imagine now that we’ll be good,” said Clayton with a rueful smile. “About all we can do at this point is to sit tight, and wait for whatever may come.”

3. When John Clayton and Lady Alice returned to their cabin they found:
a) that all their belongings had been strewn around the cabin
b) that the maids  had given them fresh sheets and towels
c) their lunch had been brought to their room

4. In all the mess, the only things missing were:
a) Lady Alice’s fur coats
b) John Clayton’s wallet
c) two revolvers and a small supply of ammo

5. What did the message under the door say?
a) don’t tell about the missing revolvers
b) don’t complain about the food
c) that they needed to tell the captain what was going on


This concludes Chapter One. Chapter Two begins in Episode Five. Go to Next Episode