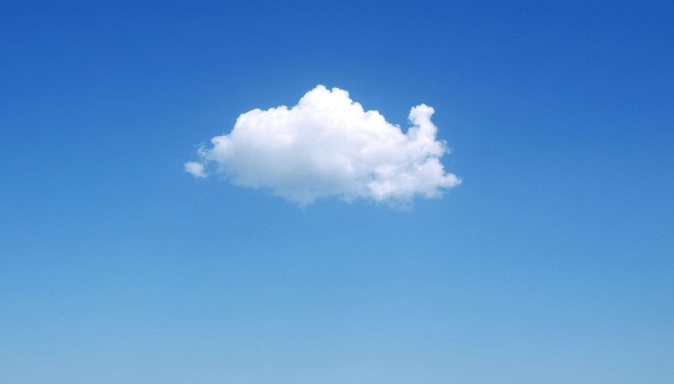 One hot summer morning, a little Cloud floated lightly and happily across the blue sky. Far below lay the Earth, brown, dry, and desolate, from a long drought. The little Cloud could see the poor people of the Earth, working and suffering in the hot fields, while she herself floated on the morning breeze, without a care.

“Oh, if I could only help the poor people down there!” she thought. They look so worried and tired. “If I could but make their work easier, or give the hungry ones food, or the thirsty ones a drink!” 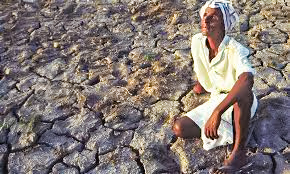 On Earth, it grew hotter and hotter. The sun burned down so fiercely, that the people were fainting in its rays. They could not stop to rest. They were obliged to go on with their work, for they were very poor. As the day passed, the Cloud became larger, and it cast a big shadow on the land. She noticed that people were stopping in the place that she shaded. Sometimes they stood and looked up at the Cloud, as if they were praying, and saying, “Ah, if you could only help us!” Her wish to do something for the people of Earth, was ever greater.

“I will help you, I will!” said the Cloud. And she began to sink softly, down toward Earth.

But suddenly, as she floated down, she remembered something that had been told to her, when she was a tiny Cloud-child, in the lap of Mother Ocean. It had been whispered, that if the Clouds go too near the Earth, they will die. When she remembered this, she held herself from sinking, and she swayed here and there, on the breeze, thinking, thinking.

At last, she stood quite still, and she spoke boldly and proudly. She said, “People of Earth, I will help you, with no concern for myself!” 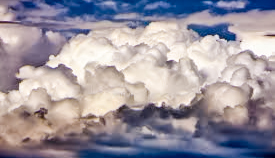 This thought made her suddenly become marvelously big, strong and powerful. Never had she dreamed that she could be so immense. Like a mighty angel, she expanded above the Earth, and she lifted her head and spread her wings, far over the fields and woods. She was so great in size, so majestic, that the people and animals were awe-struck at her sight. The trees and the grasses knelt before her, yet all the Earth-creatures felt that she still meant them well.

“Yes, I will help you,” cried the Cloud once more. “I will give my life for you!”

As she said these words, a wonderful light glowed from her heart, the sound of thunder rolled through the sky, and a love, greater than words can tell, filled the Cloud. Down, down, close to the Earth she swept, and she gave up her life, in a welcome healing shower of rain. 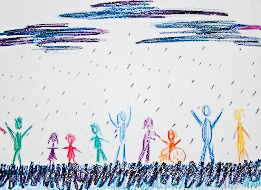 That rain was the Cloud’s great deed. People cheered, “We are blessed! The cloud has rescued us!” The Earth was wet, and there were puddles and shiny leaves. Animals were able to drink from the formerly dry creek bed. Then they saw, as they looked up, that over the whole countryside, a great rainbow crossed the sky. 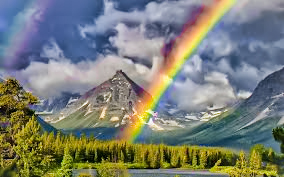 Soon, that too was gone. But long long afterwards, the people and animals who the Cloud had saved, kept her blessing in their hearts. They remembered it vividly, every time they saw a new rainbow.

1. The earth was brown and dry because:
a) the people had used too much water on their crops
b) there were no rivers in their town
c) there had been a long drought

2. Who was watching the people on earth?
a) a cloud
b) the sun
c) other people

3. What did the cloud want to do for the people
a) make sure they got lots of sunshine
b)shelter them from the hot sun and give them food and drink
c) she just wanted to watch them.

4. Why did the cloud have a difficult time deciding what to do for the people?
a) she knew that if she helped them she would have to die
b) she didn’t really like people that much
c) she thought the people should take care of themselves.

5. In order to help the people, the cloud grew much bigger and turned into:
a) a tornado
b) a big rainstorm
c) an earthquake