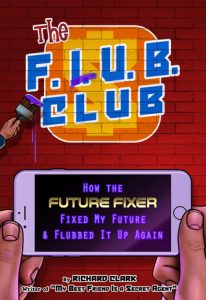 I’m a freshman at Lower Central High School. Now you’re thinking, “What a dumb name for a school!” You’re right about that too. Is it ‘lower’ or ‘central’? I guess the school-naming people couldn’t make up their minds, so they chose both. Dumb.

The school is almost brand new, but it already looks ten years old. I guess they wanted a design that wouldn’t offend anybody in particular, so they chose one that would offend everyone. Anyway, down in the basement is the meeting room for the F.L.U.B. Club. It’s really the furnace room, with the furnace blasting away all the time, but it’s the only room they’d give us. I mean come on, even the Chess Club gets a room on the main floor! Don’t get me started.

Anyway, down here is where everything began. I don’t mean just the club, I mean everything. All the craziness. The craziness that’ll either lead us in the F.L.U.B. Club to become internet ultra-billionaires – or send us (and the rest of humanity) spinning out into some crazy space-time continuum oblivion.

So what is this space-time craziness I’m talking about? Stay tuned.

It all started last Monday. I’d just created this cool new app called The Mood Tooner. That’s what we do in the F.L.U.B. Club – we write apps that are really cool. And that are gonna make us Ultra-Billionaires. Not that that’s why we write them. We just want to write the next killer app because we’re totally into coding. And if you write killer apps, you usually get to become an ultra-billionaire. (Again, not that that’s why we write them.)

So I said to everybody, “This is the one that’s gonna do it for us: The Mood Tooner!” I wrote it on the chalkboard in big letters.

Immediately, Lionel said, “You spelled ‘tuner’ wrong.” That’s Lionel Cho. He’s 15 like me and a total codehead. Lionel’s lucky I’m his friend ‘cause he has a pretty hard time getting along with anybody else. His closest relationship is with his laptop. He’s one of those guys who ‘tells it like it is’, always honest, even if he’s being totally tactless. Anyway, to go with his temperament is his sense of fashion – or lack of it. Not that I’m a fashion plate, but at least I know not to tuck a sweater into high-rider jeans.

Padma gigged, “Maybe if you’re a monkey. Oo oo!” That’s Padma Ramanathan. She’s only 14, but I think she’s smarter than the rest of us. (She skipped a grade.) Too bad she spends so much time pining for all the jocks in school. They never give her the time of day. Well, at least she’s got dreams.

“Seriously, Padma, you’re going to like this. You hold your phone up for a selfie, but it doesn’t just shoot your photo, it reads your mood!” I held up my phone to demonstrate.

Then Chuck chimed in. “I need an app to tell me I’m happy?” Chuck Kressler’s the only sophomore in the F.L.U.B. Club, and he doesn’t let us forget it. He’s just as socially clueless as the rest of us, but he thinks he’s totally hip. Padma may have dreams, but Chuck’s got delusions.

“Chuck, how many times have you asked out a girl, and she turns you down because you’re too nervous?” I asked.

Chuck got all cocky. “You’re asking the wrong guy.”

Lionel smirked. “Yeah, ‘cause you’ve never asked out a girl.”

That shut Chuck up.

I went on: “The Mood Tooner clues you in before you interview for a job or ask your  parents to borrow the car or something. If you’re nervous, you can ‘toon’ your mood to be relaxed! This is the app that’s gonna take the FIUB Club into the stratosphere!” I pronounced it ‘fee-oob’ – yeah, this was before our club had a name.

“The what club??” asked Lionel.

“I came up with a perfect name for us: The Future Internet Ultra-Billionaire’s Club.” I wrote the initials ‘FIUB’ on the board. “Fee-oob! And we got hats!” I whipped out four caps from my backpack. I’d had them made at this sports store with FIUB written across the front.

Chuck looked at his cap. “I’m not wearing this. It looks like FLUB Club.” I looked at the hat. It looked like FIUB to me.

RING! The school bell went off. We all grabbed our laptops and backpacks and headed out of the room to go to class.

Padma put on her cap. “I like mine!” But then she looked confused. “At least I think I do. Maybe I should use The Mood Tooner to find out for sure!”

As we walked upstairs, Lionel and I put on our caps too. “I think it’s cool,” Lionel said.

“Now I’m definitely not wearing it,” said Chuck as he shoved his in his pocket.

But it was pretty cool. It made me feel like we were a real club now.

But then, up in the main hall, Keith Ellis accidentally/on purpose bumped into me. “Sorry, Gundy,” he said with a stupid laugh. He was a junior, a big dumb jock with an I.Q. the same as his shoe size. Then he noticed my cap and stopped. “The FLUB Club??”

Chuck turned to me. “Told ya.”

Keith and his two jock buddies, Bruce and Lenny, burst out laughing, and Keith yelled out, “Hey everybody, check out the FLUB Club!” All the students around us cracked up too. And there was nothing we could do about it but just stand there and look like idiots.

I whispered to my fellow club members, “Don’t worry, it’ll never catch on.” They didn’t look reassured. Heck, even I didn’t believe it.

What was the purpose of the F.L.U.B. club?
a) to flub up other people’s projects
b) to become internet ultra-billionaires
c) to get good grades in computer class

What is Marty’s newest app?
a) The Brain Trainer
b) The Mood Tooner
c) The Moon Tuner

The club name was originally the F.I.U.B. club.  Why did the name change?
a) on the club’s hats, the name looked like F.L.U B
b) the club always flubbed things up
c) they decided they needed a new name