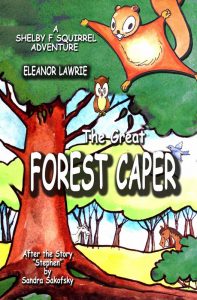 After seeing two men go through the forest with cameras and sound equipment, Shelby and his friends did a lot of thinking. It was alarming because nobody knew what those men were doing or why.  In Chapter 3 Shelby discovered big blue X marks on all the mature trees. Once again Charlie was consulted, with the owls being helpful sky taxis, who took Shelby and several others to see Charlie’s cousins, Goldie and Jacko. Goldie was very sad to have to tell the forest friends that she had seen X marks exactly like them when she lived closer to the city. Her tale shocked everyone; the marked trees were soon cut down, and very soon houses and roads were built! During Chapters 4 and 5 plans were made for protecting the forest. Patrols to watch, the fastest fliers to notify the ready troops, who alternated days for being available. With military precision, this system went on for several days before it was put to the test.

Shelby’s habit every day was to head straight for Charlie’s paddock early in the morning to set the bolt on the gate so Charlie could push it open. He and Petra had discovered a large crack in the old oak near the main road, narrow but ample space for them on a temporary basis. And his sister, Darby, and her friend, Peter, were sheltering in the old woodpecker hole that faced the side road, as he had mentioned earlier.

Marvin had reported that there were now eight shallow burrows with room for as many as four mice in each. The farm goat, Billy, and his two female companions, Nanny and Capra, had come by so they would know their way around, and also how long it took to get there from the orchard.

Rosie Robin and her whole family were spread through half a dozen trees bordering the forest. She had forgotten to tell Shelby how skilled they all were at dive-bombing an enemy target, so she flew to look for him, and found him on the way back from Charlie.

“Oh, hi Rosie!” he was pleased to see her. She was always so cheerful, it was infectious.

“I need to let you know something, so you won’t be shocked, and let the others know too, please,” she went on.

“Know what?” he asked, wondering what she was referring to.

“We robins are expert dive-bombers, anyone we aim for goes running, believe me!” she said proudly, despite herself. She was not inclined to brag, but facts are facts. This was worth a little boasting.

“Oh, that’s amazing! Wow, yes, that would be super scary!!” he nodded happily, quite impressed. “Boy, if a flying squirrel floated by right after that, just when they think the coast is clear….”

“As long as we don’t collide, Shelby,” she warned. “We don’t want any accidents, doing all this.”

“I’ll spread the word, and you do the same. It’ll be fine, I’m sure,” Shelby assured her.

The first warning to deploy the troops took them all by surprise. It rained for two solid days, and on the third, a pickup truck suddenly braked and pulled in from the side road. Two men hopped out and busied themselves at the back of the truck.

Rosie’s cousin, Merry Robin, started squawking loudly and dive-bombed the two surprised fellows, making them duck, then run with their arms over their heads and jump back into the cab of the truck, where they stared wide-eyed through the windows. One hurriedly put a cell phone to his ear.

Merry Robin took off to do her alerts and Howard Owl took over. Spreading his huge wings he swooped past the windshield, back and forth. The men ducked instinctively, even though he couldn’t possibly reach them.

The one with the phone finished his call, and the two of them conferred, obviously arguing, and loudly. After a minute or two they climbed back out and, keeping their arms in the air to ward off Howard, started to unload their gear from the rear of the truck.

Howard watched from an oak limb, quite out of breath. He was relieved to hear crashing noises in the woods and soon Billy came through, head down.

He charged straight for the nearest of the two men, and knocked him clear off his feet. The guy bellowed as he fell, and came up fighting mad. Billy stood his ground and soon both men were back in the truck cab. Cursing loudly, the driver started it up with a roar and took off, tires spinning. Billy nodded happily at Howard and trotted off toward the farm.

Just before dark, the animals held a huddle in the orchard. Most of them were there to congratulate Billy, having already praised Merry Robin for her bravery. They thought things had gone well that morning, and everyone went home feeling very optimistic.

Life was normal for three days in a row, which let most of them catch up on chores and rest a little. Shelby spent the day with Petra, Marvin F. Mouse, and Molly and Polly Raccoon for a change. They enjoyed sitting in the sun, and made a nostalgic visit to the orchard to admire the pink blossoms. The apple crop promised to be a good one this year. Darby and Peter spent part of the afternoon with them too. It was wonderful to pass the time together, the way they always used to.

Molly said, “We don’t have anything particular we can do to help save our forest right now, but we talked about it a bit. Mother remembered something from when we lived in the city.”

Polly took up the narrative, “She said there was a real panic about something called rabies. One of our neighbors had been cornered and had bitten someone in his attempt to escape. After that things changed; traps were set, our relatives started disappearing!  Rabies really scares people.”

“So what we thought is we should try to bite someone, and start a rabies rumor!” said Molly.

“What do you think?” they asked in unison.

But Shelby was a bit shocked by this idea. He shook his head. “I don’t think you should start biting people, no! That’s getting too close as well. Do you remember anything else about rabies, besides biting people?”

Polly gave that some thought, then said, “Oh, yes, now I do, since you mention it. Mother said a raccoon with rabies might stagger, kind of walk a bit unevenly. That’s perfect! We can certainly do that!”

Molly nodded eagerly, and added, “But we’ll keep our distance. Just letting someone see us should do the trick. We’ll keep out of sight for a few days after we try it, though. And let them think we’ve gone somewhere else.”

“That’s sensible,” agreed Shelby. “We can’t have you in extra danger because you want to help!”

They agreed to wait until what seemed like the right time, and then be very careful.

Later that week, Shelby and Petra went to see Charlie to check on him. He surprised them with a thought that hadn’t occurred to either of them.

“You should have waited to see what those two men were there for,” he stated bluntly. “For all you know, they came to the woods to do something good, and you’ve frightened them off for no reason!”

Shelby’s heart sank. They had botched it! Oh, no!

But Charlie smiled instead.

“Don’t be discouraged now, my little forest friends!” said Charlie to console them. “You just have to tell the watchers to hold back until they know that trees or animals are being threatened, then do exactly what you did! You know now it worked like a charm. Just keep doing it, but make sure the work rotation is fair so nobody works too hard, and keep polishing your system to be sure it always goes smoothly.”

That made sense, and took away the fear of failure already running around in Shelby’s head.

He and Petra thanked Charlie, after promising to remember to keep opening his gate every day. The next morning was put to good use, meeting in small groups to update everyone with Charlie’s advice.

1. Is it smart to work together as a community to solve a problem?

a)  a military uniform
b) a battle
c) a musical instrument

1. Did the animals do the right thing by attacking the two men who arrived in their truck?

2. Is it a good idea to find out everything you need to know before acting on something?

3. Do people in your neighborhood work together the way Shelby and all his friends did?