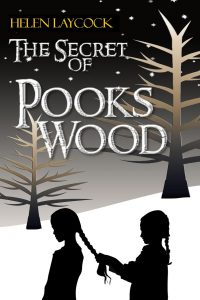 The Secret of
Pooks Wood

When she woke up she was shivering. Still propped against the tree, she was now dusted with snow and there was still no sign of Squirt and Bayonie. Not knowing how much time had passed, Stella thought it quite possible that the other two had, by now, returned to the house. She was very stiff, but hurried back as quickly as she was able.

Jo Jo was in the steamy kitchen. Pots and pans were bubbling and she was checking a recipe book.

‘Careful!’ she laughed as Stella flung the kitchen door open so hard that it banged on the tall cupboard next to it. ‘On your own?’ Jo Jo looked her up and down and smiled at Stella’s strange garb.

‘The others? No, I haven’t seen them come in, lovey, but they might have sneaked past me when I was in the other room. Perhaps they’ve gone up to the attic rooms. Maybe they’re changing costumes.’

She began humming as she turned away to stir a pot.

Stella rushed past her, flinging her bonnet down as she ran; it had kept falling into her eyes. She clattered up the two staircases that took her to the attic rooms. The key was still in the lock, but she did not need to turn it to open the door. It was still unlocked as they had left it. She longed to see the other two trying on outfits, but when she peered in, it was just as they had left it. She called out just in case. ‘Bayonie? Squirt?’

Stella raced down to Uncle Alf’s study, hitching up her skirts as she ran. He was asleep in front of the fire, his favourite place.

‘Uncle Alf! Wake up!’ she called, hurrying over. He opened one eye, then lifted his head abruptly.

‘Stella? What is it? Is everything OK?’

‘It’s the others. I think something’s happened to them… in the woods… you’ve got to come.’

Stella had never seen her uncle move so quickly. He was out of the chair like a shot.

‘Jo Jo!’ he called. ‘Get your coat!’ The three of them raced out of the kitchen door, leaving the pots boiling on the stove. ‘Where are they?’ he puffed, his face red as he led with Stella. Jo Jo was flagging behind, struggling to keep up.

Stella pointed and swallowed. ‘In the woods. Go into the woods.’

They began calling long before they were under tree cover. The three split up. Stella was no longer worried about bumping into Tom Varley. There were more important things at hand.

‘Squirt! Bayonie!’ they each called, cupping their hands around their mouths to make their voices travel.

Then Stella heard it. Squirt’s deep voice, but it was weak.

Ducking down beneath the trees, Stella saw that she was indeed near the edge of the frozen lake.

A star of ice was missing and in the middle stood a sopping wet Squirt. He was shivering furiously and his teeth were chattering uncontrollably. Lying across his juddering arms, her blue ballgown dragging into the lake, and her stringy hair hanging down was a very still, very white, Bayonie.

Why was Stella shivering?
a) she had been playing in the snow too long
b) she had forgotten to put on her warm jacket
c) she had fallen asleep in the woods and it had snowed on her

Why did Stella go home?
a) because she was hungry
b) to see if the others had returned
c) to get her warm jacket

What happened when Stella woke Uncle Alf?
a) he was annoyed with her
b) he went back to sleep
c) he went to the woods to find Bayonie and Squirt

What did Stella hear in the woods?
a) Squirt
b) wild animals
c) Bayonie

Where did Stella find Squirt?
a) huddled under a tree
b) standing on the edge of a frozen lake
c) in a deserted cabin