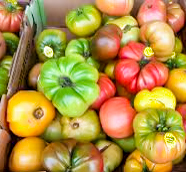 Tomatoes are plants that are native to the Americas. They were unknown in Europe until early European explorers of the Americas returned home with them. In Europe, cooks correctly identified the tomato plants as a member of the nightshade family. 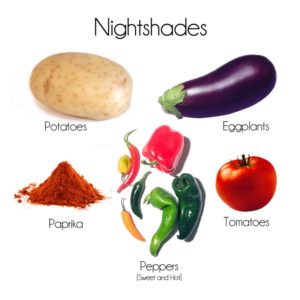 Nightshade plants were known to be poisonous, and people were especially suspicious of fruits that were red. Europeans initially considered tomatoes to be curiosities, not a food type worthy of being eaten.

Many early European settlers in the Americas did grow tomatoes, but usually only as ornamental plants. Even in the mid-1800s, people grew tomatoes in their flower gardens for their pretty red fruits. But no one ever dreamed of eating one.

Very gradually, word finally got out that tomatoes were actually edible, if they were cooked for a long time. Cooks would stew them with half a cup of sugar, in a tin cup at the back of the wood stove. Still, many people were afraid to eat them. One husband of the 1880s came home to find his wife concocting a tomato dish. “Get rid of that. Do you want to kill us all?” he thundered.

But tomatoes eventually caught on, and today people eat tomatoes raw, or cooked in stews, soups, and sauces. They eat tomatoes alone, or in combination with other foods. It’s hard to imagine a time, not so very long ago, when tomatoes were not considered a delicious, versatile food.

So if you love French, Spanish, and Italian cuisine, just think for a moment how important a foundation ingredient tomatoes are, for so many of their recipes.  No tomatoes?  Then no pizza, no spaghetti sauce, no paella, and no tomato bisque.  And soups and salads would be so less interesting, if they were also bereft of tomatoes. If it weren’t for Europe’s exploration of the Americas, centuries ago, their cuisine of modern times might be considerably different, less interesting, and not nearly as tasty.

1. Tomatoes originally grew in:
a) Africa
b) Europe
c) America

2. Why were people worried about eating tomatoes at first?
a) people thought they were poisonous
b) they did not taste good
c) people back then did not eat fruits or vegetables

4. Today, tomatoes are:
a) seldom eaten because they make people sick
b) only used as a decorative plant
c) used by many countries to make foods we all enjoy