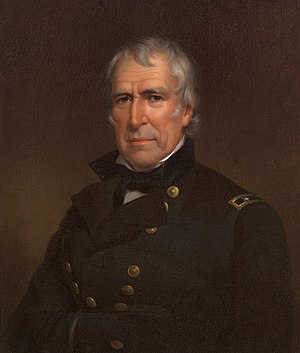 Taylor was a general in the United States Army. He led an army during the Mexican-American War. He was selected by the Whig Party to be their candidate for the presidency, because he was a famous general.

During his term, slavery was a big issue in the U.S., because the Northerners wanted no more slavery in the U.S., and they wanted to stop newly-formed states from allowing slavery. The Southerners, however, believed that they had the right to keep their slaves, and many people feared that they would choose to not be a part of the United States anymore (a decision which they eventually did make in 1860).

Taylor did not like the idea of the Southern states leaving the United States, at all. As President, he threatened to use military force against them if they were to do that.

Taylor never voted until he was 62 years old. He was never a resident of the United States.

Sixteen months into his presidency, Zachary Taylor died, and his Vice-President, Millard Fillmore, became the U.S. President who took his place.

The Compromise of 1850 (a proposal including several laws that would calm down the slavery issue, by pleasing both the North and the South) was voted on, in Congress, shortly after his death.

1. Before he was president of the United States,  Zachary Taylor was:
a) a general in the army
b) president of Mexico
c) the town mayor

2. During his term as president, one of the big problems in the country was:
a) selling guns
b) slavery
c) illegal elections

3. The southern states wanted to keep slaves and threatened to:
a) kill everyone in the northern states
b) buy more slaves
c) not be part of the United States anymore