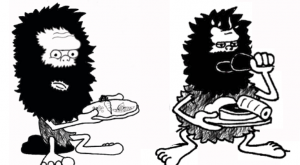 Zogs and Cogs
A Tale of Teamwork
From Famine to Feast

Why Read This Book?
To learn how teams work together. All of us together are better than each of us apart.

Why are teams important to me you ask? Many of the most important objects in our modern world are made by teams. This includes smartphones, skyscrapers and spaceships.

This is the story of hungry people who want a better life. Words written on rounds rocks called cogs give advice. A group of people called Zogs, learn how to work together to go from famine to feast. We learn how to use teamwork to succeed too.

Years pass and the Zogs forget about teamwork. In the second book, Zogs 2, they have new problems. They relearn the words on cogs. They use teamwork to solve big problems. 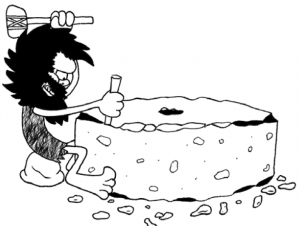 Dedicated to our children.

Together as a team, all problems can be solved. 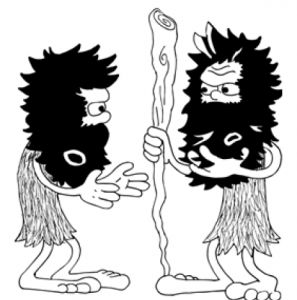 This is a story about two groups of people. The Ogs are good hunters. They eat well.

The Zogs can not hunt. They are always hungry. 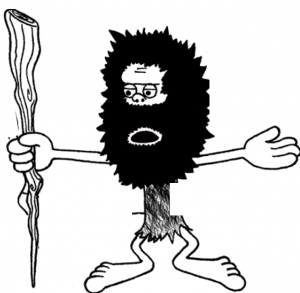 Zee is the leader of the Zogs. 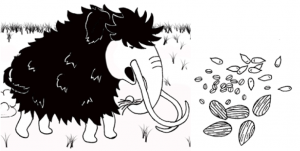 Years ago, two tribes compete. The Ogs hunt mammoths. They are successful.

The Zogs, only pick food from plants. They are not full.

tribe – group of people
compete – struggle against each other 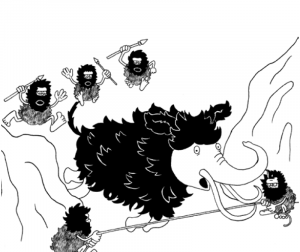 The Ogs have a clever way to hunt mammoths. They make sharp wooden spears and hunt as a team. They share the feast with the whole tribe. The Ogs are full.

In the past, the Zogs tried and failed to hunt. They stopped trying.

Today, they pick bits of food from plants. They eat barely enough to live. 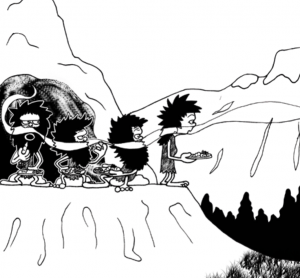 One night, the hungry Zogs, smell the food from the Og’s feast. The Zogs want a better life.

hungry – to be not full, famish 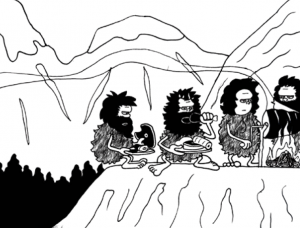 feast – to eat a lot of great food 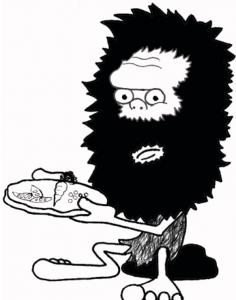 Zee sees the near-empty dinner plates. He determines to make changes. He wants the Zogs to be full.

determine – strongly decide
full – to have enough, to not be hungry
near empty – not very much 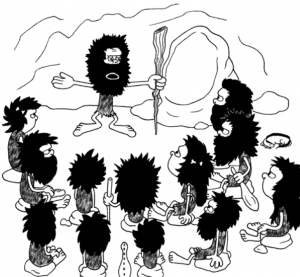 Zee calls the Zogs together for a meeting. He speaks with the hungry crowd. “Welcome!
We are here to talk about how to fix our hunger. Today, we gather our food from plants.” 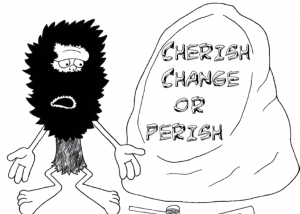 Zee continues, “see how the Ogs feast on beasts. They are full. We are not.

We Zogs must adapt or die! Another way to say this is, we must cherish change or perish.” 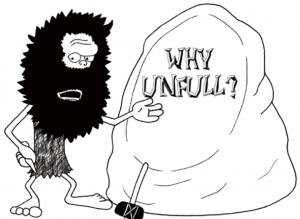 Zee asks, “Why are we Zogs hungry or unfull? What can we do about it?”

unfull – to have empty stomachs, to be hungry

One who carves round rocks, called cogs, has an idea. The Zog’s try to roll a cog onto a mammoth. 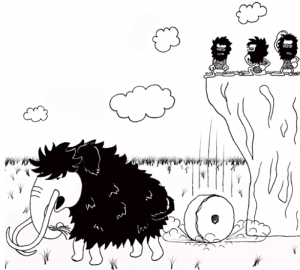 The hunt fails. The Zogs determine to keep trying.

carve – make with tools
cog – something round and useful 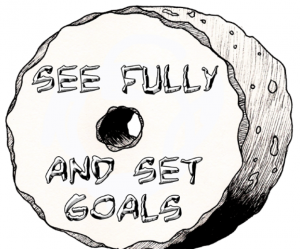 Zee sees the cog from the failed hunt. He writes on it, “SEE FULLY AND SET GOALS.”

The Zogs all think about the root causes of their hunger problem. They make a goal to be full. 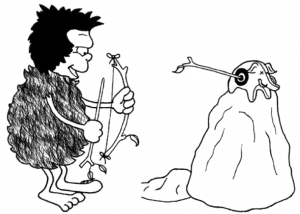 The same day, a young Og plays. He shoots twigs with a bent branch and string. Many Ogs laugh at him.

The Ogs miss an opportunity to invent the bow and arrow. This could have helped their hunting.

opportunity – a good chance to do something new 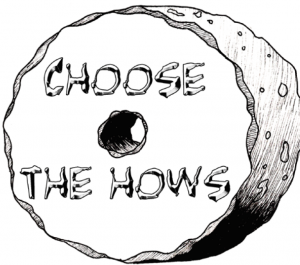 Back at the Zogs, Zee asks, “Why did our past hunts fail? The Zogs reply, “Our flat-tipped spears bounced off the thick mammoth skin.” “We need better tools,” said Zee. He writes on the second cog. “CHOOSE THE HOWS!”

Everyone talks about ideas on how they can fix the hunger. A smart person asks, “What about the rocks that leak shiny metal?”

“choose the hows” – to decide actions needed to accomplish a goal 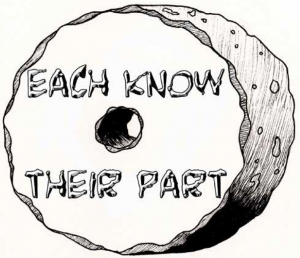 The Zogs are excited! “What can we do?” they ask!

Zee writes on the third cog. “EACH KNOW THEIR PART.” Zee gives actions to everyone.

“each know their part” – everyone knows what they should do 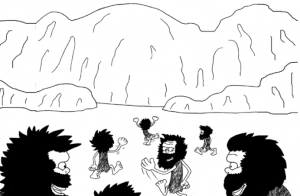 At sunrise, the Zogs meet. Zee writes on the fourth cog. “DO THE HOW TOs.”

An excited, small group runs to the rock mountain. 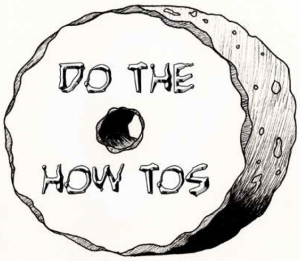 They build a big fire at the rock face. No metal flows from the large rocks. Frustrated, someone throws water on the hot rocks. The large rocks break into small pieces.

The Zogs heat the small rocks. Metal flows from the pieces. They cast the copper into spearheads. 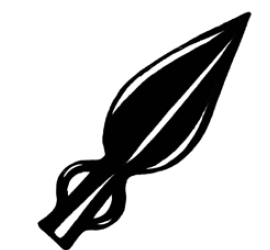 frustrate – to be very discouraged, upset
cast – to pour hot liquid metal into a mold 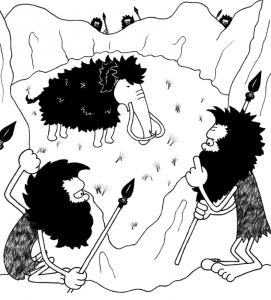 The next day the Zogs try out their metal-tipped spears.

The Zogs work as a team. The hunt succeeds. They all share the feast. The Zogs are full. 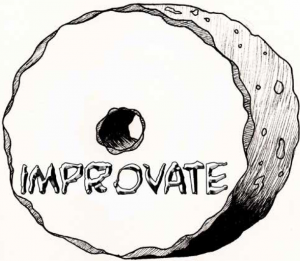 At sunrise, the Zogs meet. Zee writes on the last cog, “IMPROVATE.”

Zee teaches, “Improvate means to improve and innovate. That is, make things better and think of new ideas. We must prepare for life’s changes. Do not let full stomachs, lead to empty minds.” 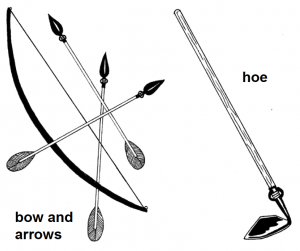 They think up new ideas and make new inventions.

creative – to think of new ideas
invent – to make something new 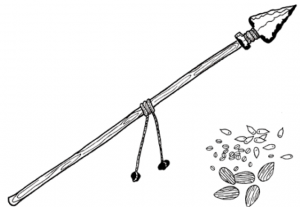 The Zogs improve ways to hunt animals and plant crops. The other tribe, the Ogs do not improve. 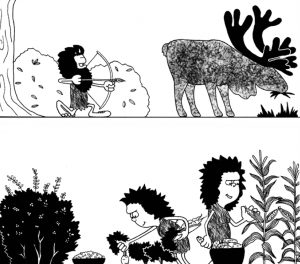 Soon, the ice-age returns. There are no more mammoths. Because the Ogs do not change, they become extinct.

Today, we still work in teams to achieve our goals!

ancestor – relative who lived before us
extinct – to die out, to no longer be alive 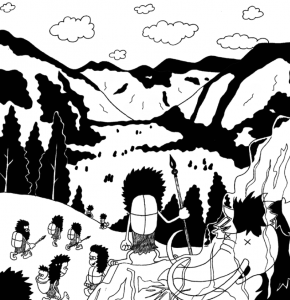 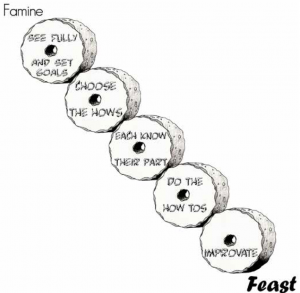 Cognitive Cogs:
SEE FULLY AND SET GOALS
Look at the big picture
Write down end result working for
CHOOSE THE HOWS
Decide the actions to get the goal
EACH KNOW THEIR PART
All know what to do for the goal
DO THE HOW TOS
Do actions that lead to the goal
IMPROVATE
Think of new and better ways

Today, teams use the cogs to be successful. Look around our complex world. It is full of things made by teams. For example, teams make cars, cameras and computers.

Alone we have ideas, together we turn them into products!

product – the result, something that is made to sell 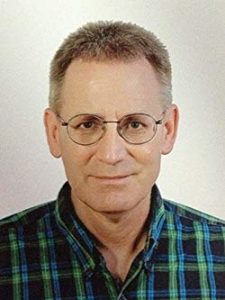 Special thanks to Douglas J. Alford for providing us this wonderful book.