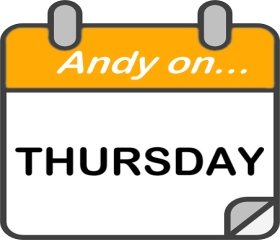 Andy was up, dressed, and in the kitchen before his mom even called him.

As he came downstairs, his parents looked at him in amazement.  Even his dad, who was usually out the door before Andy’s eyes were even open, raised his eyebrows in surprise.

When his mother, in her nicest voice, asked him what was going on, Andy smiled cheerfully and told her that since it was Thursday, and the cafeteria was serving the dreaded mystery meat, he decided to make his own lunch.  Mom and Dad glanced at each other, and then back at Andy.  Andy up before the alarm, and making his own lunch?  What was going on here?  As Andy made his peanut butter and jelly sandwich, and put it in a bag with a couple of sticks of celery, he told his parents about his reading class on Wednesday.

He told them about the cool man who really seemed to understand how he felt about reading, and he told them about mind-shame and what a mess the English language was and why, and he explained how PQs worked.  He told them that the man would be back in reading class today, and that he would teach them some more, and give them all instructions to get the Magic Ladder PQs app on their computers at home.  His parents looked as happy as Andy felt.  And they were happy.  They had not seen Andy this excited about school for several years, since he was in second grade, in fact.  Before all the reading started to get in the way.

Then Andy put a cookie in his lunch bag and put the bag in his backpack.  He went back into his room, grabbed his hoodie from the hook near the door, and was off to catch the bus.  Wide awake, he talked to Connor about a movie he wanted to see, about the latest Star Trek episode, and what the cafeteria really used to make the mystery meat.  He told Connor a little bit about his afternoon reading class, but just a little bit.  Andy wanted to make sure that it would ‘take’ first, that it would not turn out to be just another wasted effort, like all the other reading experiments his teacher had tried on them before.  Deep in his heart though, Andy really believed that this time it would work.  This time it just felt right, somehow.

It was eight fifteen when Andy walked into homeroom.  Elisa was already seated.  She was wearing a beige top with grey boots.  Andy actually looked directly at her and said, “Hey Elisa.”  She gave him a delighted smile as she returned his greeting.  Yesterday in music class, they had hardly spoken, so caught up was he in everything that had taken place during reading class.  Elisa was happy that Andy was being friendly again.

Math class was good, as usual, but Andy was in a hurry for it to be over, so he could get to the reading classroom.  He had to smile at himself.  When had he ever been in a hurry to get to reading?

When he walked in the room, the Magic Ladder man was already there.  He told everyone to turn on their computers and then suggested they look over the large list of stories arranged by topics on the index page.  He made a point of saying they should choose something that really interested them, and not let their past reading issues discourage them.  Next he said the strangest thing.  He asked the class to pledge one thing: whenever they didn’t recognize a word, click on it.  He said just doing that would cause a huge improvement in reading.

After a mini review of the instructions from yesterday, and teaching the kids a few more things about the ingenious program, he had everyone put on their headphones, and then let them experiment on their own.  Andy could hardly wait to dive in.  It seemed like reading was about to get a million times easier.

Andy was smiling as he tried out the various things the PQs program could do.  As he experimented, his smile grew even bigger.  While he read aloud a story about Muhammad Ali, the great boxer from Louisville, Kentucky, he suddenly realized that the man was standing behind him, studying his behavior as he listened to him read.  When Andy took off his headphones and turned around, the man asked Andy what he thought about reading on PQs.  No one had ever asked Andy his opinion of a lesson before.  Mostly, the teachers assigned something, and he did it.  It did not really matter too much what he thought.  But this guy seemed really serious and interested in Andy’s response.

Andy told him the truth about everything; how he had hated to read and how it made him feel awfully stupid.  He told the man about how he always tried to get out of reading out loud in class.  He told the man about some of the reading approaches that had failed.  Then Andy said slowly, “I think this one is going to work.  I know I still have a lot to learn, but I feel like it is already helping me.  Instead of crazy rules, it’s giving me the clues I need to figure out words.  It makes me feel like someone understands how hard this stuff is, and knows how to make it easy.  I don’t feel so humiliated and fearful anymore”.  The man said nothing, but somehow, his smile said everything.  Andy knew that this guy, who he had just met yesterday, and might never even see again after today, had changed everything about the way he was learning to read.

Before he left, the man gave everyone instructions for getting the PQ system on their home computers, as he had promised he would.  Then he reminded them all to never give up trying, that the English language was the problem, not the minds of the kids.  After a quick goodbye, the guy was gone.  After he left, the teacher reminded the class that there was a test on Friday.  They would have their choice of stories about astronomy or mythology, and they would be using the PQs app on the computer to take it.  Now that Andy could rely on the PQs for help, reading was no longer so mysterious.  Instead of feeling fearful and anxious about the test, he was actually feeling excited, because they were two of his favorite topics.

Even though the cafeteria smelled awful, like it always did on Thursdays, Andy didn’t care.  He laughed and talked with his friends.  He paid close attention in his classes for the rest of the day, and was able to complete most of his homework before he even got home.

As soon as he got home, Andy loaded the Magic Ladder PQ App and showed his parents how it worked.  They were amazed.  Then they listened while Andy read a paragraph to them, stopping a couple of times to click on a word to get help with how to say it.  As Andy started seeing and PQing the same words a couple of times, he started to recognize them.  They became ‘his’ words.  After a half hour or so of reading and showing his parents around this new and amazing site, Andy told them that he needed to practice reading to get ready for the story they would be tested on tomorrow.

1) Andy got up early on Thursday because he:
a) was excited about reading class
b) didn’t want his mom to make his lunch
c) his alarm clock was broken

2) Andy told his parents about:
a) the broken alarm clock
b)  the man in his reading class
c) about his test

3) His parents were happy because
a) they liked for Andy to make his own lunch
b) Andy would be using the computer at home
c) because Andy was excited about school for the first time in several years.

6) When Andy got home he:
a) took a nap
b) did his homework
c) put the Magic Ladder app on his computer