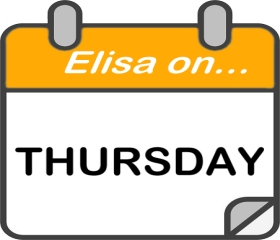 The snowplows did a great job of clearing the roads, and schools were open again.

Elisa yawned, as she got on the school bus.  Her mom really did want to understand the new reading site that Elisa was using, and they had stayed up late, so that Elisa could be sure that her mom really got it. Once Mom understood how to use the PQs, she could hardly wait to start using it with online news sites, Wikipedia, and all the other sites that she frequented.  Elisa smiled to herself.  Andy had helped her with reading, and now she was helping her mom.  In fact, her mom had talked about maybe helping her sisters (Elisa’s aunts), who had also come from Cuba, and still struggled with reading in English.

In homeroom, Elisa looked around for Andy.  He was usually there, and in his seat, before she walked in the room.  Connor saw her questioning look, and told her that Andy had a bad cold, and would be absent that day.  Elisa was disappointed that her friend would not be at school today.

The math class had started doing story problems, and although Elisa was still a little nervous about it, things were going better than she had expected.  Now that she could read most of the problems with very little trouble, working them out was not too difficult.  It was the same math that she had been doing all along, but with words added.  She could do this!

Reading class was even better.  The teacher had started class with a review of the book they were reading.  When she asked questions about the chapters they had already read, Elisa raised her hand.  For once, she knew the answers, and she was excited.  Then it was time to go on to the next chapter.  Some days, the teacher had the class read silently, and on other days, they took turns reading aloud.  Elisa had always dreaded the days that they had to read, with the entire class listening.  But over the past couple of days, she had read ahead to this chapter, with the help of PQs, and she felt sure that she knew all the words, and that she understood what the chapter was about.

Nervously, Elisa raised her hand to read first.  The teacher looked at her in surprise.  Elisa had never raised her hand to read before.  The rest of the class got quiet.  They knew something different was going on.  Nervously and slowly, at first, Elisa began reading.  After stumbling over a couple of words, her nervousness evaporated, and she was reading.  She finished the first paragraph and went on to the second.  At the end of the second paragraph, she stopped and looked up.  There was complete silence in the classroom, and then the whole class was applauding for her.  All these kids that Elisa was always so nice to, they all wanted to let Elisa know that they were really happy for what she had accomplished.

At lunch in the cafeteria later that day, Elisa and a couple of her friends sat with Connor.  Elisa had brought some delicious, spicy, meat filled pastries that her mom had made.  They were small, and each one took only a couple of bites to eat, so she always brought several.  After sharing this particular lunch with her friends a couple of times before, and finding herself still hungry after lunch was over, she started bringing several extra little pastries to share.  Today she gave one to Connor as well, who immediately decided that it was his new favorite food.  Elisa’s friends, who had enjoyed this treat before, smiled at his delight with this new food discovery.

Elisa asked Connor about Andy.  Connor said that Andy had started getting sick after they left his house Wednesday afternoon, and was probably still feeling pretty miserable.  Elisa immediately felt sorry for Andy, and decided to bake some cookies when she got home from school that afternoon, and take them over to him.  As they continued to eat, talk turned to the dance at school on the upcoming Saturday.  Most of the kids in Elisa’s class, both guys and girls, didn’t date; they just all went in a group, and danced and had a good time.

As soon as Elisa got home, she got out eggs, sugar, butter, chocolate chips, and several other things that the recipe called for.  This was a recipe for her favorite chocolate chip cookies, and she only baked them on special occasions.  She decided that helping Andy feel better was a pretty special occasion, so the cookies were definitely a good idea.  Soon, the house was filled with the heavenly smell of baking cookies.  She piled some on a small plate and covered them with foil, so that they would still be warm when her mother got home.  The rest she put on a larger plate, covered it with a couple of layers of foil, and put it in a shopping bag.  Then she put on her coat, boots, and gloves, left a note for her mom, and started out for Andy’s house.

Elisa walked mostly on the side of the roads, since the sidewalks were still piled high with snow.  Upon arriving at Andy’s house, she walked up to the front door and rang the bell.  Andy’s mother answered the door.  She was surprised to see Elisa, and told her that Andy was sick, and would not be able to visit.  Elisa explained that she wasn’t there to visit, just to drop off some cookies, and to say that she hoped Andy would be feeling better soon.  As she was saying goodbye, Andy’s dad came to the door.  When he saw what was happening, he and Andy’s mom exchanged smiles.  Andy’s dad told her that Andy would be really happy with the cookies, and that he was sure they would help to speed his recovery.

Elisa’s mom had arrived home, moments before Elisa walked in.  The kitchen still smelled like freshly baked cookies, and Mom was just helping herself to one of them, as Elisa entered.  Elisa took one for herself, and then they got down to the business of talking about their days, and getting things ready for dinner.  Then time for homework, reading, and finally, bed.  Hard to believe that another week was almost at an end.

1) Elisa had stayed up late the night before to:
a) be sure her mom understood PQs
b) to keep reading her book
c) to talk on the phone with her friends.

2) Who was absent from school on Thursday?
a) Andy
b) Connor
c) Elisa

3) Because her reading was improving, Elisa found that math class
a) was harder than ever
b) was the easiest class ever
c) was better than she expected

4) In reading class, for the first time,
a) Elisa forgot her reading book
b) Elisa raised her hand to read first
c) Elisa was too ashamed to read

5) To make her friend feel better, Elisa
a) baked him some cookies
b) sent him a card
c) called him on the phone.