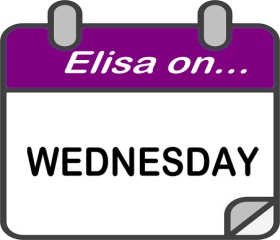 Elisa awoke to…..quiet!  Usually she could hear her mom, busy in the kitchen, getting breakfast ready before she went to work.  She looked at her clock; she was late!  She had missed the bus!

Elisa flew out of bed, and was dressed and downstairs in record time, only to find her mom sitting at the kitchen table having a cup of coffee.  Was her mother sick?  What was going on here?  Sensing Elisa’s anxious questions, her mom looked up and smiled.

Then, the magic words: Snow Day.  Several feet of snow had fallen on the town since the snow started yesterday afternoon.  It had fallen fast, and it was continuing to fall heavily, and the plows were unable to keep up with it, so most of the roads were impassable.  So no school for Elisa, and no work for her mom.  As they chatted, Mom put some sweet rolls in the oven, and fixed Elisa a special cup of coffee.  Elisa was not allowed to drink coffee very often, but sometimes her mom would pour a little bit of the strong Cuban coffee into a large mug; then she’d fill the rest of the mug with warm milk and a little sugar.  Coffee-milk, she called it.  Elisa loved this little treat.  She always felt very grown-up when she was sitting at the table talking with her mom, and both were sipping coffee from their cups.

before.  In her reading class, they were reading a book by a writer named, Roald Dahl.  She thought he had quite a strange name, but the book was great.  A little weird, but she loved stories that were unexpected and strange.  The class was on chapter 3, and Elisa had already fallen behind.  Last night she had stayed up late, catching up on the book with the help of PQs.  Yeah, it had taken a little more time to click on the words that she didn’t know, but by the time she had finished, she had read and understood everything that had taken place in the story, so far.  In fact, she was so excited with her progress, that she had even started on chapter 4.

Mom smiled as she listened to Elisa telling her about the story.  A boy, a giant flying peach, talking bugs?  Why would school kids be required to read books like this, she wondered.  Yet, it did sound magical, as Elisa described to her the story, so far.  By the time they had finished their coffee and sweet rolls, Elisa’s mom wished she was a better reader, so that she could read it for herself.  She said this aloud to Elisa.

Elisa tried hard not to show her surprise.  She knew her mom did not

read very often.  She would quickly skim the newspaper, to see the headlines and to check what was on sale at the grocery store, but she did not take time to read any of the other stories, or even the comics.  What Elisa had not realized was that it was still a little difficult for her mother to read in English, although she was a good reader in Spanish, her own language.  Elisa offered to show her mom how to use the PQ App on the computer, to start making reading easier for her.

The phone rang.  Elisa was closer, so she answered it.  It was Andy, telling her that he and Connor were planning on going sledding when the snow stopped, and asking if she would like to go with them.  She quietly asked her mom, who nodded her head yes.  The weather channel on TV had said the snow should stop by noon, so they decided to meet at the hill, around 1:00.  Elisa helped her mom put things away in the kitchen, and then went to clean up her room, and to do a little more reading.  Time passed quickly, and before she knew it, Mom was calling her for lunch.  She sat down to a bowl of steaming hot tomato soup, and a grilled cheese sandwich.  Her favorite lunch.  This would warm her up before she went out in the frigid air.

Soon Elisa was wearing her warmest clothes and heading out the door.  The boys were already at the hill when she arrived, pulling her sled.  This time they all took turns riding each other’s sleds.  Andy and Connor were amazed at the speed of Elisa’s sled, and they wanted to know where she got it.  She told them that the family at one of the houses where her mother cleaned, had given it to them.  Since the family had recently moved here from Maryland, that was probably where they got the sled.  The boys sighed.  It was unlikely that they would be traveling to Maryland, any time soon, to buy new sleds.

Fortunately, Elisa was more than happy to share hers.  After a couple of hours of sledding, they all started to get chilled, and they walked over to Andy’s house for hot chocolate, as they had done several days ago.  As they walked, they could hear the snowplows scraping the road, as they pushed away snow to clear a pathway for cars.  It was pretty likely that they would be back in school tomorrow.  After some good conversation, and warming up in front of a fire for a little while, Elisa decided to head home.  Although it was only 4:00, the sun was already starting to go down, and the temperature was dropping.

Elisa walked in the door, red-faced from the cold.  Her teeth were chattering, and in spite of thick mittens and two pairs of wool socks under her snow boots, her fingers and toes were freezing, almost numb.  Mom quickly heated a big pot of water and put it on the floor by Elisa’s chair.  After Elisa took off her boots and socks, she put her feet in the water.  It hurt a little for a few minutes, like pins and needles, but at the same time, it felt really good to feel the warmth come back to her feet.  Meantime, Mom rubbed Elisa’s cold hands between her warm ones, until finally they were no longer chilled.  Elisa went upstairs to take a hot shower, and by the time she came down, her mom had put a warm, spicy beef stew on the table.  They ate, quietly, for a few minutes.  It seemed to Elisa that Mom had something on her mind.  Finally, her mom spoke.  She asked Elisa if she could show her how to use PQs, so that she could also become a better reader.

1) Why didn’t Elisa go to school on Wednesday?
a) she missed the bus
b) school was closed for a snow day
c) she was not prepared for a reading test and skipped out

2) While they were sitting at the kitchen table, Elisa told her mom:
a) about a book she was reading
b) that she wanted a new dress
c) that it was too cold to go outside

3) Elisa’s mom wished that:
a) Elisa would hurry up and finish her coffee
b) that the snow would stop
c) that she was a better reader

4) Elisa offered to:
a) read to her mom
b) show her mom how the PQ app worked
c)  buy her mom some easier books

5) After she finished lunch, Elisa:
a) met Andy and Connor to go sledding
b) read some more of her book
c) helped her mom clean the house