The two best friends started walking, and they went in a different direction than the pitifully embarrassed dog had wandered. Carlos questioned, “How about we go to the city park, next?”

Jayla responded back to him, “Excellent idea. We’ll turn right at Blue Street, because that’s the fastest way to Orange County Park. We’ll be there soon.”

As they walked, Carlos offered up a delicate question. “Jayla, who in the world would name their dog ‘Funny’? Why did you do that?”

Carlos laughed, and he said, “I haven’t paid too much attention to that, I guess. But now that you mention it, it makes total sense. He’s really just the opposite of being cross-eyed, isn’t he?”

Jayla continued, “His two eyes are just a small part of it. He doesn’t have any hair on his tummy, he limps really badly, and the next time he’s panting, take a sharp look at his tongue. It flops around, and he drools like an out of control water fountain.”

Carlos asked, “So you named him ‘Funny’ because he has all of these health problems?” Jayla replied, “Well, it’s really more that he simply LOOKS funny.” Carlos responded, “That seems kind of mean, to me.” 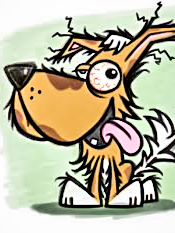 Jayla defended her choice for her dog’s name. “Carlos, he just showed up in our back yard one day, and he was not in very good shape. We didn’t know why he had so many problems. It was probably an unfriendly meeting with a wild animal in the woods, so we obviously had to help him, and we did just that.

Carlos replied, “I’m so very sorry, because I had no knowledge about that. But I have one more important question. If something like that happened again, would you do the identical thing?” 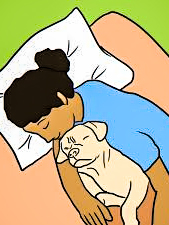 Jayla said, “Of course we would! Funny is the most loving dog that anyone could have, and he is such a very important part of our family!”

By now, they had reached the park, and they were about to experience the biggest surprise of their young lives!

1. Where did Carlos want to look next?
a) behind the brick house
b) at the city park
c) on the next street

2. What question did Carlos ask Jayla?
a) How long had Funny been missing?
b) How old was Funny?
c) Why did Jayla name the dog Funny?